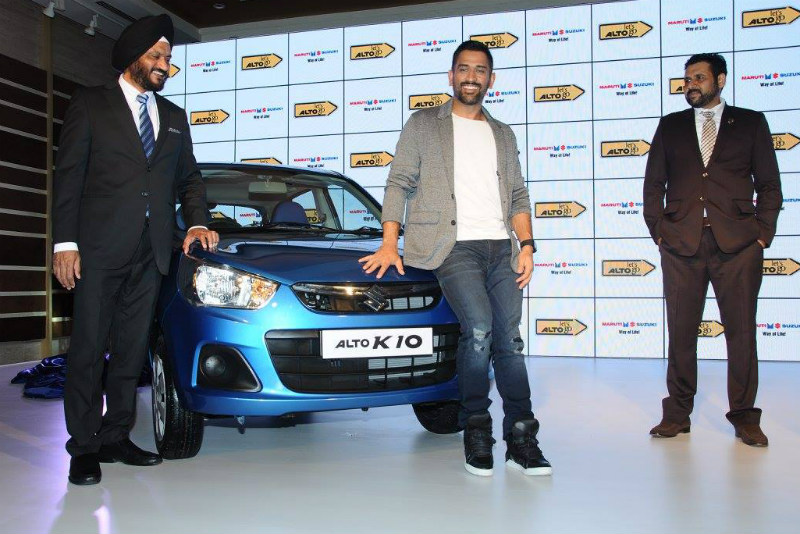 ‘M.S. Dhoni The Untold Story’ is what the upcoming biopic on the popular Indian cricketer is called. So it made complete sense for the most popular carmaker in the country to associate itself with the film. Which is exactly what has happened. Maruti Suzuki has launched two special editions in collaboration with Dhoni; one’s based on the Alto 800 and the other on the Alto K10.

The special edition variants will be available from October first week onwards, and are only a tad more expensive. Before delving into that, let’s look at what makes them special. The changes are applicable to both cars. The seat covers get a ‘7’ embossed on them, the car has an ‘M.S. Dhoni The Untold Story’ sticker on it, and there are body graphics, reverse parking sensors, and a roof-mounted spoiler as well.

On the inside, there’s a music system (complete with USB and AUX connectivity) in the Alto 800, interior styling in carbon, new floor mats, door sill guard, ambient lighting, and other bits like covers for the gear knob and steering wheel. The smaller (and less powerful) Alto 800 gets the special edition only in the LXi trim, while the ‘M.S. Dhoni’ edition of the Alto K10 will be available in both LXi and VXi. Price-wise, the former is Rs 16,777 more expensive than the corresponding variant, while the latter commands a premium of Rs 12,777.

There’s also a Dhoni merchandise kit for the real fans out there.

Not comparing cricketers here, but the special edition is just like the revered Fiat Palio S10, only a lot less special…