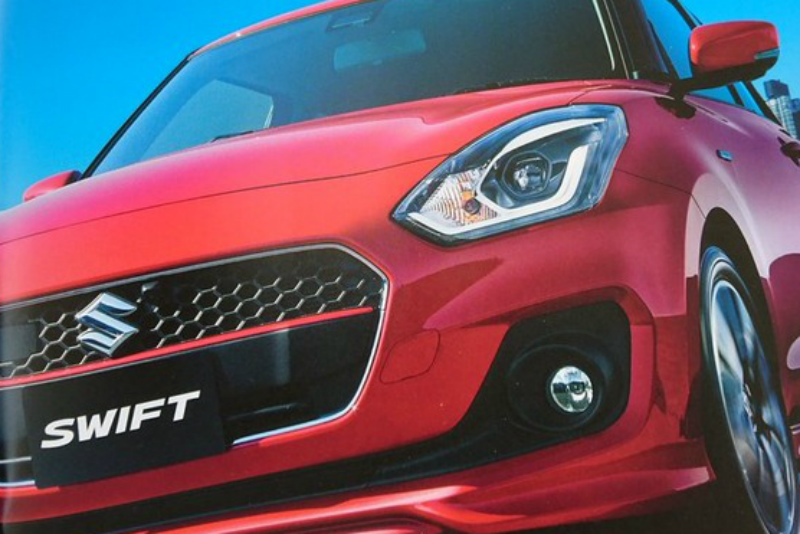 So what if the Suzuki Baleno has taken away all the limelight, the new (next-generation) Swift will regain its glory and charm. How? Well, the leaked images show how.

Leaked patent images, renderings, and eventual brochure pictures suggest that the upcoming (Maruti) Suzuki Swift will retain the original design, but with new front- and rear-end styling. The black A-pillar, like on the current car, works wonders. And with the rear door handles hidden neatly in the C-pillars, the overall design looks cleaner, too.

The snouting radiator grille takes centre-stage while the lights are visibly smaller than the current/outgoing car. The redesigned bumper is clearly in line with the slightly more chiselled design approach. Much like on the current car, the rear doesn’t look as exciting as the front. It retains the wraparound tail-lamps, a curvaceous rear windscreen, and a bumper-mounted licence plate.

On the inside, the cabin is totally different from MSIL has offered on the Swift. The brochure leaks give away a flat-bottom steering wheel, round AC-vents on the centre console, a rather large touchscreen infotainment system, and Baleno-sourced AC controls.

With the use of advanced materials, it’s likely that the Swift will be lighter than the current Baleno, so expect better performance from the same set of engines: 1-litre Boosterjet and 1.2-litre Dualjet. There will also be a Swift Sport at a later stage, and of course, a diesel engined variant, too. It remains to be seen whether the ubiquitous Fiat-sourced 1.3 is retained or is replaced by a Suzuki-made unit. The Dualjet engined versions will also get optional mild-hybrid system, which will in turn allow the car to achieve a claimed fuel economy of 27.1 kpl.

Gearbox choices will include a 5-speed MT and a CVT unit. And while markets elsewhere (UK, India, etc.) will get the front-wheel drive variant only, the JDM Swift will also be available with an optional 4WD drivetrain.

The Swift has been more boy-racer than premium hatchback, and with advancements made on the upcoming model, it’s likely to continue with the same image. While the Baleno will continue to cater to those who are looking at a more spacious hatchback, the Swift is likely to be the choice of eager enthusiasts.

With stricter safety norms approaching, expect it to offer basic levels of safety equipment even on the base versions. Lower weight combined with engines like the Boosterjet will surely help Maruti offer a warm hatch — without a huge price tag, of course. But keep in mind that all that happens only once the upcoming Boosterjet sees decent demand.

It’s expected to be showcased in Japan either just before the year ends or in January. Launch in India is likely to happen in the latter part of next year. In Japan, the Swift will be made available in two trim lines: regular and RS (with a more sporting appearance). Former will comprise XL, XG, and Hybrid variants while RS will include RS, RSt, and Hybrid.

The leaked JDM prices suggest the petrol engined base variant will cost an equivalent of Rs 7.76 lakh. The current base model costs about 7.6 lakh, so don’t expect a massive difference in pricing in other markets as well.