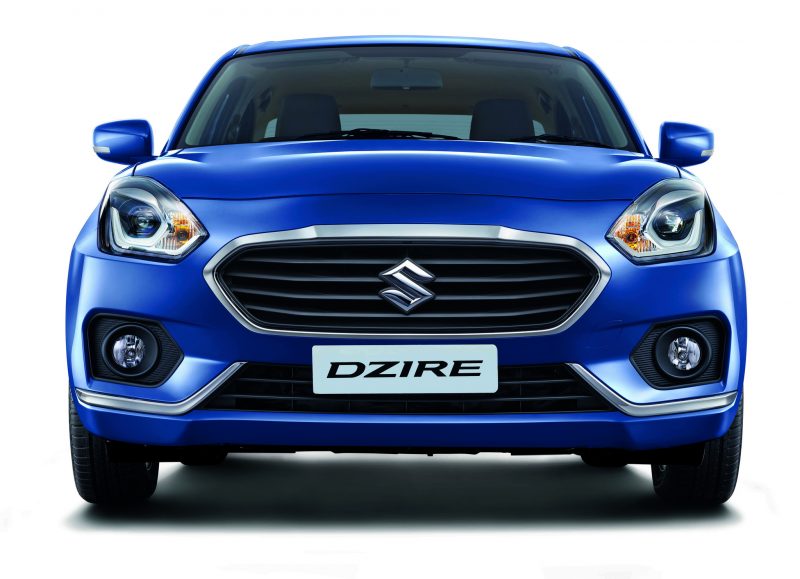 While it may not break the Internet, the all-new Maruti Suzuki Dzire is going to ensure that Maruti Suzuki stays unruffled by the increasing competition. Or at least that’s what the car promises to do. Launched today, the Maruti Suzuki Dzire has a new design, a new platform underneath, better features, new dashboard, and even optional AMT, among other changes. Here’s all that’s uncovered in today’s press conference and unveiling of the newest Maruti Suzuki compact saloon:

The sub-four-metre regulation has given rise to a bunch of cars with abrupt, almost unlikeable rear ends. Now with second-gen offerings, that is changing. The Dzire, too, has improved vastly, in terms of design. It looks more like a full-fledged saloon, with a well-defined boot. The Baleno-like curved surfaces on the sides make it appear more pleasing, without being too curvaceous.

With the front-end styling shared with the upcoming Swift hatchback, the Dzire is rather good looking. It gets LED head- and tail lamps, a chrome surround for the new radiator grille, lending an overall look that is more finesse and less sporting. And that’s certainly no bad thing, because the Dzire wasn’t designed for the boy racer anyway. Also, don’t miss the new dual-tone alloy wheels!

Based on the 5th generation of Suzuki’s B-platform, called HEARTEC, the Dzire now makes extensive use of high-tensile steel. It not just makes the car more rigid, but also hugely lighter, in comparison to the outgoing model. The petrol version loses about 85 kilos while the diesel about 95 kilos. So expect better fuel economy from the same range of engines as before (more on which below), along with more perceivable performance. So losing ‘Swift’ from its name shouldn’t be a concern, really.

Like all recent products by Maruti Suzuki, the new Dzire is tested for frontal offset, side impact, and pedestrian safety regulations. It gets dual airbags, ABS and EBD, and ISOFIX child seat mounting points standard regardless of the variant you choose.

Much like the outgoing car, the new Dzire will be offered in both petrol and diesel versions. The former’s Maruti’s 1.2-litre VVT unit, while the diesel is the Fiat-sourced 1.3-litre one – likely to be available only in the 74 bhp tune. The former is claimed to return 22 kpl while the diesel boasts what MSIL calls ‘best-in-industry’ average figure of 28.4 kpl.

But unlike in the earlier versions of the Dzire, the new car will be offered with standard five-speed manual and optional automated units on both the engines. One small caveat here is that the AGS will only be available on the ‘Vxi/Vdi’ trims onwards.

Talking of trims and features…

There will be four trim levels on the Dzire: Lxi, Vxi, Zxi, and Zxi+ for petrol, and Ldi, Vdi, Zdi, and Zdi+. There will be six colour choices: Oxford Blue, Sherwood Brown, Gallant Red, Magma Gray, Silky Silver, and Arctic White. The car also gets SLDA (Smartphone Linkage Display Audio) system, which is relevant to the current market, thanks to Apple CarPlay and Android Auto connectivity features. Seating is also said to be improved for comfort, while touches like inclusion of faux wood and satin chrome ensure the dual-tone cabin isn’t monotonous.

And most importantly, it’s larger

Still magically under the four-metre mark, the new Dzire measures 3995 mm in length, 1515 in height, and 1735 mm in width. But while the figures don’t say anything in isolation, but for the end user, the new Dzire boasts a longer wheelbase (20 mm increase), hence it has more room inside the cabin. It’s also wider than before, so apart from the legroom, there’s more shoulder space, too, both at the front and rear. In addition to that, at 378 litres, it also has a larger boot now.

And if the team at Maruti has managed to increase the boot without hurting the customer’s pocket, then the Dzire would be the ideal sub-four-metre product. And if that’s not success, then what is…

Also, on a side-note, the company has managed to sell 13.81 lakh cars with under the Dzire brand, so it doesn’t really need a lecture on success, does it?

Prices for the petrol-engined version start at Rs 5.45 lakh, while the base diesel is priced at Rs 6.45 lakh. The least expensive AGS-equipped petrol carries a price tag of Rs 6.76 lakh — a little less than Rs 50k more expensive than the manual-equipped variant in the same trim. And same is the case with the AGS-equipped diesel version, at Rs 7.76 lakh.

Deliveries of the new Dzire begin today, with the outgoing model commissioned for taxi duties as the Dzire Tour S. There’s an eight-week-long waiting period on the former already, with 33,000 cars booked already. Expect a huge jump in the numbers, hence if you’re planning to buy one, book it soon.

We’ll have our review ready as soon as drive the car sometime next week.