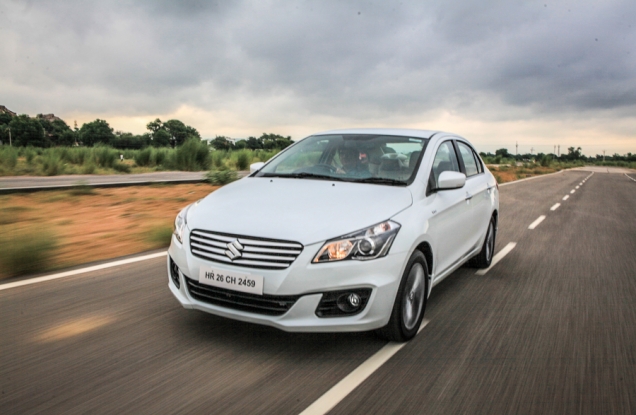 Maruti Suzuki has launched the hybrid version of the Ciaz diesel. Called a tongue-twisting ‘SHVS’ for ‘Smart Hybrid Vehicle by Suzuki’ (‘Rexton by Mahindra’, anyone?) it adds to the regular diesel Ciaz a start/stop system and an intelligent alternator.

These systems are already present on premium cars, but are a first in the CIaz’s segment. Maruti calls them ‘Idle start stop’, ‘power assist’, and ‘brake energy regeneration’. ‘Idle start stop’ turns the engine off automatically when the car is standing still, just like Mahindra’s ‘micro hybrid’ system does on its various products. A system like this usually needs an upgraded starter motor (and peripherals) and battery to cope with the larger number of cranking cycles the engine goes through during its life. Maruti goes one step further than Mahindra with the intelligent alternator, which turns itself on only when the engine isn’t under load, thus saving fuel and making sure all the engine’s power is directed towards acceleration when it is needed the most.

There are minimal cosmetic changes – it gets a small ‘SHVS’ badge on the bootlid, and on the inside, the instrument cluster has a green light which shows when the engine is running efficiently and there’s a gear shift indicator as well, to help maximise efficiency from the driver.

The headline figure is an ARAI fuel efficiency figure  28.09 kmpl, and it will cost Rs 8.23 lakh, ex-showroom Delhi onwards. The prices of the SHVS models are Rs 20,000-30,000 cheaper than the equivalent standard diesels, thanks to the FAME subsidy which reduces excise duty to 12.5 per cent from 24 per cent. That offers a direct benefit of Rs 13,000 to the consumer.

All prices are ex-showroom, Delhi.