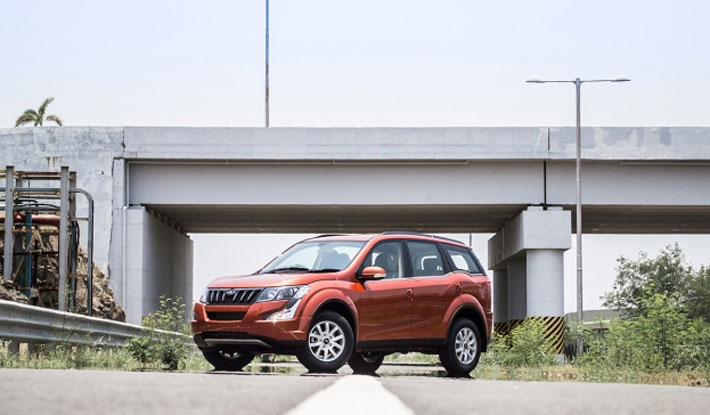 After some serious time spent on the drawing board, the Mahindra XUV 5OO has re-emerged and now looks more promising than ever before. The XUV, Mahindra’s flagship SUV, was an appealing car for those who wanted to look beyond the Scorpio but it was, to an extent, marred by niggles that demanded Mahindra’s immediate attention. As a result, Mahindra has not only addressed those few shortcomings but has also worked towards making it a stronger, more appealing overall package. You can click here for our full review of it.
The XUV doesn’t ‘spot’ a complete change, but is more a tweaking of the current design. The face is new — there’s a new bumper, of course, and Mahindra has chosen to provide the new XUV with a two-part trapezoid grille. The foglamps are large and are a more vertical design element than before. The headlamps now have an ‘S’ shaped light guide bisecting the two interior elements of projector unit and bulb-and-reflector that replaces the strip of white LEDs that underscored the headlight before. The headlamps and fog lamps are connected by a chrome strip on the inside of the fog lamps as well.

The sides of the car display new ‘parabolic sculpted’ wheels, a chrome underline for the window line and new door handles that most noticeably have a button on the front doors to accommodate keyless entry and go. The rear of the car has a new chrome strip above the number plate — a trend we’re beginning to notice in facelifts of the year 2015. There is now a sunroof, too, which is a unique feature for the segment.

There are new puddle lamps in the mirrors as well, and they project the car’s logo onto the pavement. Another reminder of the car’s name is offered with the new backlit scuff plates in all four sills. Mahindra has revamped the colours of the interior along with the materials. There is a cool blue lighting theme, switching from the previous amber. It is a fresh new look, especially at night, but the white roof lamps seemed bright on an eye-wateringly bright afternoon, which makes us wonder if they’re too bright for night time.

The start/stop button is placed in a very odd position. We’ve encountered cars that place it on either side of the steering wheel or between the front seats on the centre console, but the XUV chooses to place it halfway between the two. There is a new infotainment system that has, among other things, a reversing camera with dynamic guidelines — a very useful feature for a car as large as the XUV. You can also control the audio and climate control system from your mobile phone using the ‘Blue Sense’ app. Other unique features of the new system include satellite navigation provided by MapMyIndia and a wallpaper that can be set by you. The driver’s seat for the top-spec W10 variant is now electrically adjustable.

The engine is the same with the same power and torque figures at 140 bhp and 33.7 kgm, and the gearbox is the same 6-speed manual, but Mahindra has reduced the final drive of the XUV, which makes in-gear acceleration smoother, stress-free and quicker. There isn’t much change in outright pace, but it should make the XUV a much easier car in traffic. The alternator is now an intelligent one that can disconnect from the engine when it’s under load, which saves fuel. Mahindra calls this ‘brake energy regeneration’ like a few other manufacturers do, even though there is no relation of the technology to the brakes. The optimisation of gearing, alternator and ECU has resulted in a higher ARAI fuel efficiency rating of 16 kpl, up from 15.1 kpl. So not only is the new XUV apparently quicker in gear, it is also more efficient overall.