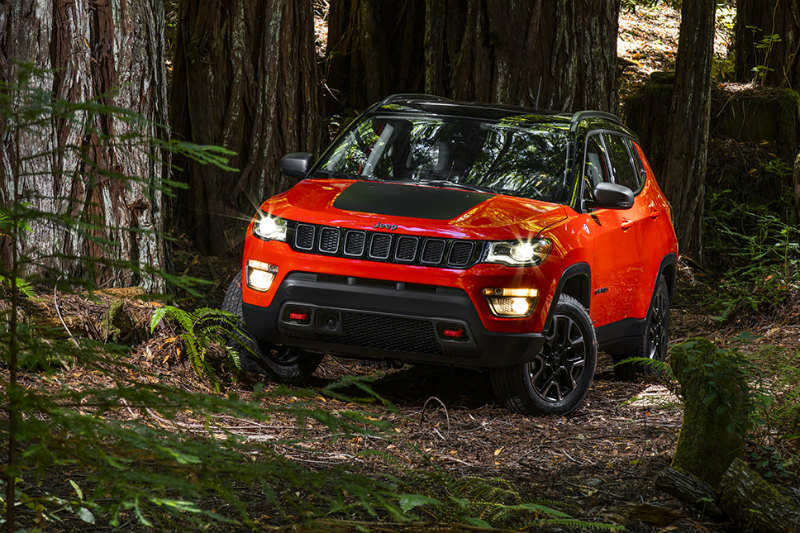 The India bound small Jeep, better known as the ‘C-SUV’, has been officially unvieled in Brazil, as the new Jeep Compass. This isn’t a new nameplate, since this new Compass will be replacing two SUVs from the Jeep lineup in USA: the present Compass and the Patriot, both based on a very old GM/Mitsubishi platform.

Head on, the Compass looks like a shrunken Cherokee, making no mistake that it looks anything other than a Jeep. A rising shoulder line, curving up rear window sills and the high placements of the tail lamps, add a bit of height to the rear and the design. Like the Renegade, the Compass will be available in front-wheel-drive and Active Drive all-wheel-drive systems. A ‘Trailhawk’ rated model will also be provided, which is the red car in the press pictures (first photo above).

Unlike in the Renegade (which it shares the platform with), the Compass has a dashboard design not too dissimilar to that of the Cherokee. Sitting proudly in the centre is the 8-inch touchscreen infotainment system. As can be seen in the photo, there’s climate control, a rather large LCD in the instrument cluster, an electronic parking brake, and USB and Aux connectivity for the infotainment system.

While FCA says that the Compass will be available with 17 different powertrains all over the world, including different engine tunes of the same engine, for India, the Compass is expected to come with a 2.0-litre Multijet diesel engine. While the six-speed, Aisin-sourced automatic should be available, other transmission options are a six-speed manual and the brand new nine-speed Chrysler sourced automatic.

Like the Renegade, the Compass is based on the company’s Small Wide 4×4 platform, and will be positioned above the former in the line-up where both the Renegade and Compass are available. In India, where Fiat intends to assemble the Compass at its Ranjangaon plant, its closest competitor will be the Hyundai Tucson, when it goes on sale next year. It will make its debut at the upcoming LA Auto Show in November this year.