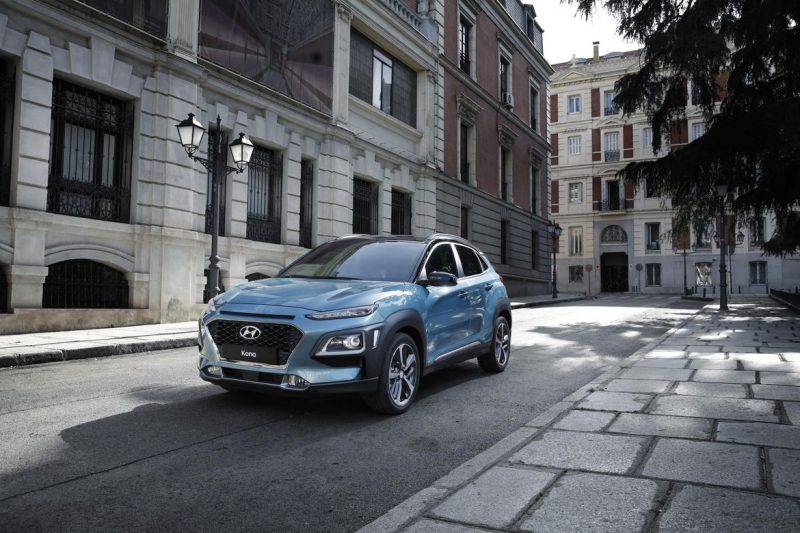 The Hyundai Kona compact crossover-SUV has been unveiled in the company’s domestic market, Korea. Which is where it goes on sale first, followed by Europe, North America, etc.. The sub-Tucson vehicle competes with new-age crossovers like the Toyota CH-R, and looking at the styling of these two, we won’t be surprised if you find everything else in the segment a bit boring.

At 4.17 metres in length, the Kona sits somewhere between the i20 Active and the Creta. But in terms of design, it’s far ahead of both; most importantly it’s distinct. Sharp elements at both front and rear lend it a concept car look, and complement the more conventional design elements like a dual-tone roof, partial plastic cladding on the wheel arches, and Hyundai’s cascading grille.

On the inside, as announced with the first teaser of the vehicle, the Kona gets a unique (for the segment, at least) HUD (Heads Up Display). Android Auto-/Apple CarPlay-ready touchscreen infotainment system is also available, along with the ability to wirelessly charge your smartphone. Further adding to the list of features are collision assist, blind-spot monitor, lane-keeping assist, etc.

Engine choices will be market dependent, and will include both petrol and diesel options. AWD is included as an option, and gets a multilink suspension setup at the rear, as compared to the 2WD model’s regular torsion beam.

An arrival in the Indian market is unlikely for now, given that the Creta is a strong brand in itself. But it can’t be denied that the Kona looks more sophisticated, comes with way more features, and if launched, will make a class of its own.