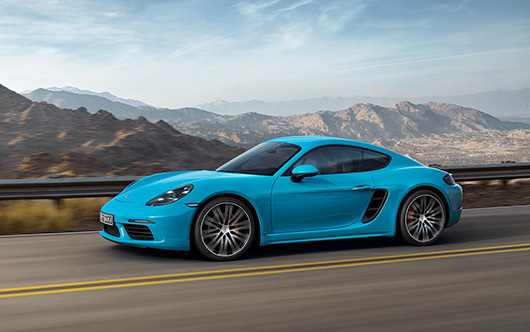 Few months after we were shown the 718 Boxster, is coupe counterpart, the 718 Cayman has been unveiled by Porsche. Other than the new engines and the change in model nomenclature, the 718 Cayman would be reversing what has been a long standing oddity in the coupe/convertible world. It will be cheaper than the Boxster, like every other coupe which has a drop-top version. Of course, the difference in price (around Rs 1.4) is only on the base versions, and as with any other Porsche one can go pretty crazy with the options and end up far higher than where one began.

The Cayman gets the same engines as the Boxster, with the power figures unchanged. It’s 345 bhp for the 2.5-litre engine in the Cayman S, and 295 bhp for the 2.0-litre Cayman, both being turbocharged boxer fours. The 718 Cayman is lighter than the Boxster, and hence its zero to 100 kph times are .4 seconds faster, at 4.5 seconds and 4.0 seconds for the two engines. If the Sport Chrono Package is opted, the Cayman gets the 918-inspired ‘mode switch’ on the steering to toggle between Normal, Sport, Sports Plus and Individual. Also, for the first time, Porsche’ s adaptive suspension system, PASM Sport is available for the S, which lowers the car by 20 mm, while the normal PASM system lowers it by 10 mm.

As of now, the naturally aspirated boxer six cylinder engines are history, at least for the vanilla-spec starting versions. In future we could see the 718 line being handled in the same as the turbo-Carreras, with Porsche opting to keep the GT cars naturally aspirated, and in case of the 718, also six-cylinders. So other than the Cayman GT4 successor, everything else might go the turbo way.