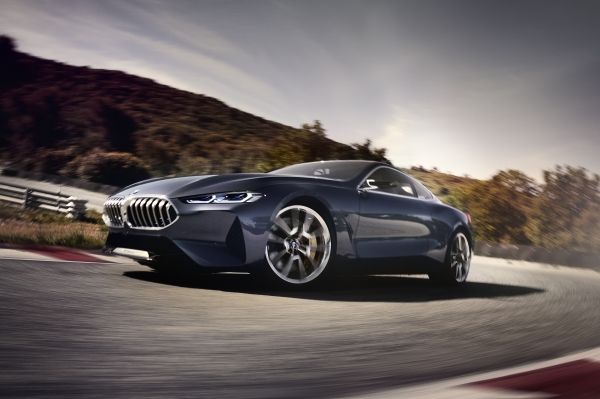 BMW is looking at making its presence in the luxury GT segment with an all-new 8 Series. Scheduled to go on sale in certain markets in 2018, the car is currently presented as a design study.

The pop-up headlamps might be gone, but the Concept 8 Series clearly possesses the style and charisma expected from a car of this stature (and from this segment). It’s sleeker and more appealing than the current-generation 6 Series Coupe (which apparently got discontinued to make way for this one). The grille has distinctly grown wider up front, but sharper looks make the side and rear profiles stand out.

On the inside, the centre console is turned towards the driver, highlighting BMW’s approach. The company didn’t spare anything in making the cabin more plush, thanks in part to the use of exquisite materials. For instance, apart from the usual aluminium, leather, and even carbon fibre, the 8 Series gets its iDrive controller made of Swarovski glass.

The press announcement also emphasised on the fact that the 8 Series doesn’t compromise on the driving dynamics, but adds luxury to the whole experience.

No model lines are announced yet, but wishing for an engine line-up comprising a straight six and V8 won’t be too much.

The 6 Series meanwhile is expected to continue in the Gran Coupe form. A sportier, more focussed version of the 6er might eventually be positioned as a proper 911 rival.

And just in case you were wondering, BMW is finally realising the M8 dream. There will also be a Le Mans racer based on the same, scheduled to go racing next year.