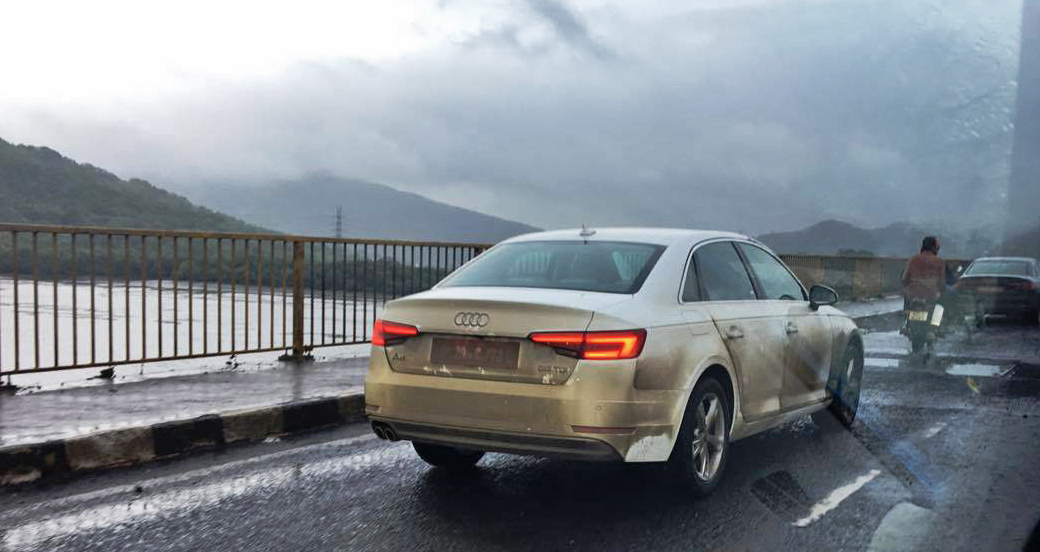 Audi has been testing the new A4 in India for a while and it looks like they are out again to do some monsoon testing. We caught this train of A4s on the outskirts of Mumbai , together with the next generation Audi Q5, which had some black strips on it to hide the headlight and tail-lamp design.

First displayed at the 2016 Auto Expo in New Delhi, the next generation Audi A4 will be launched in India sometime around August, with 2.0-litre four cylinder petrol and diesel engines. Both the engines come with a similar 187 bhp tune, although Audi offers a more powerful 248 bhp version of the 2.0-litre petrol equipped with the quattro four-wheel-drive system. We did see a petrol TFSI among the group of test cars, so it will be interesting see which engine variation does Audi get to India.

The new A4s are based on the modular MLB platform, but the version 2.0 of it, which underpins are wide variety of VW group cars from the Audi Q7 all the way upto the Bentley Bentayga. Following Audi’s new design language, the new A4’s are a bit sharper edged than before, but with a lot of curved panels thrown in and it’s lighter too. Inside, the higher-spec Audi A4s get the Virtual Cockpit central console.

Audi might launch the car as an India assembled product from day one, just like the previous generation A4. It will take on the likes of the BMW 3 Series, Mercedes-Benz C-Class, Jaguar XE and Volvo S60. More powerful versions of the A4 like the 3.0 TDI and possibly the S4 are likely to come to India by 2017.

Infact we drove the new Audi A4 sometime back, along with the new A3 and you can find our review of them here.