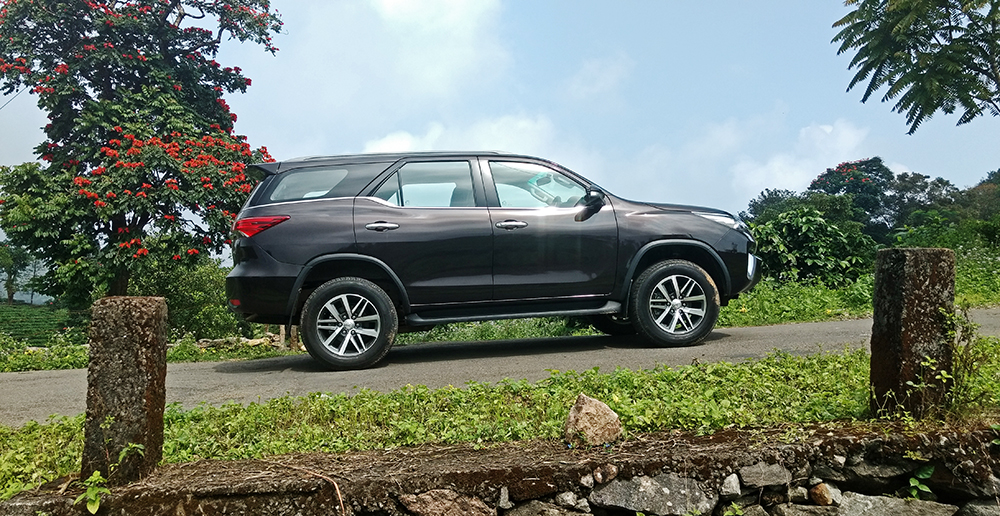 There are two engines available at launch: the 2.8-litre diesel and 2.7-litre petrol, both of which are available in the Innova Crysta, while the smaller 2.4-litre diesel isn’t included here. Power and torque figures of the diesel are identical to the Crysta’s, at 172 bhp and 42.8 kgm, when paired with the six-speed manual. The diesel is also available with a six-speed automatic, and with that the engine’s torque figures also receive a bump to 46 kgm. There is a choice of manual and automatic gearboxes with the petrol engine too, a five-speed manual and a six-speed automatic. The petrol engine’s specifications remains the same across both the gearboxes: 164 bhp and 25 kgm.

A mention must be made about the weight of this new Fortuner, because at 2.6 tonnes for the petrol and 2.7 tonnes for the diesel, it is almost 900 kg heavier than the old Fortuner and the new Innova Crysta. Suddenly, 25 kgm for the petrol doesn’t sound much does it? Wait for our review to find out…

Going back to the gearboxes, only the six-speed manual in the diesel comes with what Toyota calls the ‘Intelligent Manual Transmission’, which is sort of an anti-stall feature where the ECUs keep the revs up to prevent stalling — quite useful when you are crawling up a hill. Also, both six-speed automatics are torque convertors and come with paddle shifts and a shift-lock.

Talking about crawling over rocks, yes, the new Fortuner gets optional 4WD, but only on the diesel. Power is apportioned to all four-wheels via a suite of sensors and a traction control system, with a shift-on-fly rotary knob in the centre-console allowing one to choose between H2, H4 and L4 ratios. While we are in the off-road capability section, let’s talk some numbers. The new Fortuner is rated with a 29 degree approach angle and a 25 degree departure angle. To save you from a Google search, its main rival, the Ford Endeavour has a 21 degree approach and a 29 degree departure angle. So ease your off-roading escapades, the Fortuner comes with a hill-start assist and a downhill-assist. And as far as ride quality is concerned, you will be happy to learn that Toyota has added a stabilizer bar at the back to control the pitch and bouncing, although it is available only in the diesel.

Getting bored? Don’t worry, we are now getting into the good stuff, the features! Toyota had not shied away from cramming the Innova Crysta with tons of useful and luxurious bits, and it’s not too different with the Fortuner. Standard equipment list, is of course, dependent on the variant, but if you were to spend a lot of money, it comes with a brown leather interior, wood inserts, 8-way power adjustable seats (only for the driver), keyless go, a seven-inch infotainment system with navigation, tilt, and more importantly, telescopic adjustment of the steering, and cruise control. To make things convenient there are auto-headlamps, projector headlamps, LED Daytime Driving Lights, an electrically operated tailgate, an 80-litre fuel tank, 60:40 split for the second row, a one-touch tumble for the second and the third row, and park assist with a reversing camera.

For the segment, the Fortuner is adequately equipped when it comes to safety features. The 2WD manual misses out on some of them, like stability control, brake assist and hill-start assist, which is available in the rest of the range. The Fortuner has got its basics right though, with disc-brakes on all four wheels, seven airbags and ABS with EBD standard across the range, with the 4WD versions getting the downhill-assist.

How does the new Fortuner stack up against the Endeavour then? It is smaller, shorter and narrower than Fortuner, but not by much, just a few millimetres here and there. And while the Endeavour gets two diesel engine options: a 158 bhp 2.2-litre and a 197 bhp 3.2-litre, the Fortuner, with its 2.8-litre diesel and 2.7-litre petrol, has an equally wide appeal.