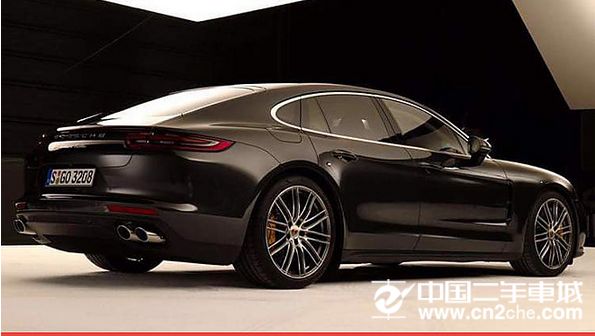 A chinese website (www.c2nche.com) has leaked the images of the brand new Panamera, with the images suggesting it was taken when a studio shoot was taking place. And Porsche has not disappointed. While the original Panamera never won any beauty contests thanks to that rather bulbous behind, the new one has tackled that challenge in a far more pleasing way. Instead of trying hard to make a sedan look like a coupe, the roofline doesnt seem to taper down as aggressively as before. But instead of extending it to right at the end, which made the previous Panamera look a bit like a hearse, the roofline flattens out before the rear spoilers and joins tail-lights, which run the entire width of the rear. The strong haunches on the rear shoulder also makes the area aft of the C-pillar look less heavy, design-wise. Although it is not exactly clear from the leaked images, but the final design of the head lamp elements seems to have been altered from what we had seen on spy shots and on the final prototype drive.

The only pictures leaked of the inside are of the rear passenger area, which had a full length centre console dividing the seats, and had a large touchscreen. As we had already mentioned before in an earlier post, the instrument console will get an analog tachometer in the middle, but will be surrounded by two digital rounds dials on either side. While the picture of the front dashboard has not been leaked yet, the people in the know say that there will be a huge 12.3 inch touchscreen, and less buttons.

As a recap, the new Panamera is going to be based on a completely new modular platform, called the MSB, which will be shared by other VW group cars. Manual gearboxes and naturally aspirated engines will not be found in the new Panamera range. At launch, there will be the Panamera 4S with a 3.0-litre twin-turbocharged V6 producing around 440bhp and the Turbo with 550bhp 4.0-litre V8.