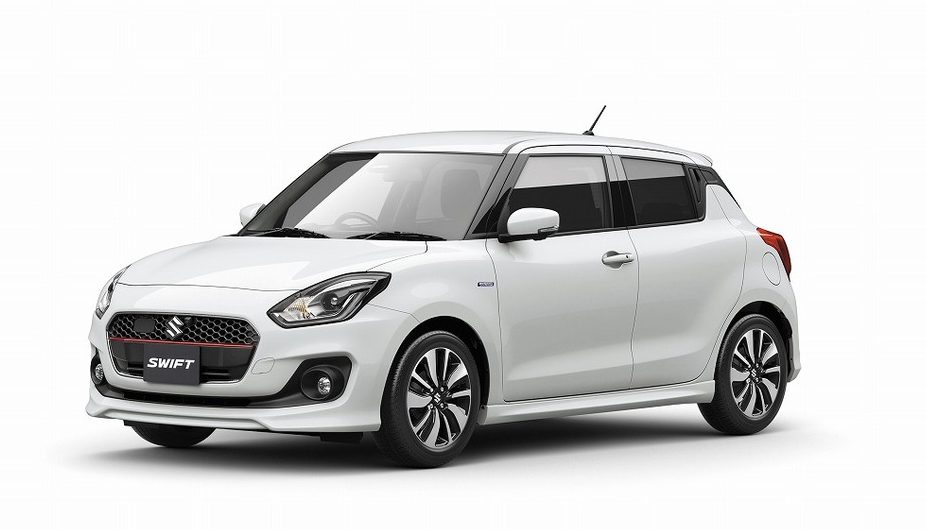 Suzuki has unveiled the next generation version of the Swift hatchback at an event in Japan, where it goes on sale on January 4, 2017. India-arrival is to happen next year, but as reports suggest, Maruti Suzuki India Limited might just launch its saloon derivative — the next generation Dzire — before bringing the hatchback. The one showcased is the JDM-spec car whose recent brochure and picture leaks gave us an idea about the possible specifications of the car. The one that goes elsewhere globally will be showcased at a more prominent stage — the Geneva Motor Show in March next year.

While it’s unlikely the Swift will look as radical (in comparison to rivals) as it did when it first came out in 2005, the third-generation car is clearly a step upwards from the now-ageing second-gen design. Unchanged silhouette might not be a concern, because the rest of the car looks fresh and sporting. The side profile is cleaner thanks to the rear door handle being neatly tucked in the C-pillar. There’s a distinct contour on the side, similar to that on the Baleno. Elsewhere, the front fascia is all-new with smaller headlamps, wider, snouting grille, redesigned bumper. The rear retains the wrap-around taillamps and windscreen; the latter appears more prominent with black C-pillars.

Inside, it gets a new dashboard design, steering wheel with a flat bottom, and an Apple CarPlay- and Android Auto-ready infotainment system. The seats are also new, too. And while we await the official dimension figures, the boot appears to have slightly grown in size. The optional safety pack also gets a collision mitigating system.

Engine options on the Japanese model will include a 1.2-litre petrol, a 1.2-litre petrol with a mild-hybrid system, and most importantly, the 1-litre turbocharged ‘Boosterjet’ petrol. Like other JDM cars, this one will also be available with an optional all-wheel drive version (not on Boosterjet). 5-speed and 6-speed will be available on the 1.2-litre and Boosterjet respectively, while a CVT will be optional (only on the naturally aspirated unit).

The front-wheel drive version, that has since 2004/5 (depending on the market) become a favourite among keen drivers. The new car, with its lightweight ‘Heartect’ platform promises to continue the legacy forward. It’s still a big task, considering more than 5.3 million units of the previous two generation cars had been sold till November 2016.

The Indian model will get both petrol and diesel engine choices, although the inclusion of the Boosterjet will make it the Swift Sport(ing) that India always wanted. Are you listening, Maruti Suzuki?