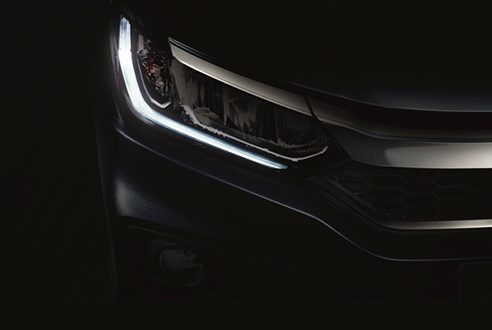 The current generation Honda City was launched in late 2013. And while the design wasn’t a huge jump from the car it replaced, it was the inclusion of the 1.5-litre diesel engine that made the Honda City a segment bestseller again. As time passed and the competition started catching up (mainly in form of the Maruti Suzuki Ciaz), the need for a facelift became more evident. In response to which, Honda will launch a new, updated version next year, following its Thailand launch on January 12, 2017. Ahead of that, the company has released a couple of teaser images:

There’s a resemblance to the new Honda Civic and the China-specific Honda Greiz. Be it the extended chrome appliqué (from the grille onto the headlamp), the new set of headlamps, or the DRL strip, the City now appears more up-to-date. The teaser also gives away a new wheel design, although that might be Thailand-only.

The teasers also reaffirm that there will not be major changes as the front fender and the taillamp design remain unchanged. Same can be said about the engine options – at least for the Indian market. Thus, you’ll continue to get a 1.5-litre i-VTEC petrol engine and a 1.5-litre i-DTEC diesel unit. Gearbox choices will include a standard six-speed manual for the diesel and an optional CVT automatic on the petrol. The current five-speed manual on the petrol is likely to be swapped with a six-speed gearbox from the BR-V.

Other changes can include an updated infotainment unit, most likely to be the 15.7-inch touchscreen system that’s reportedly now a part of BR-V’s equipment list. Android Auto and Apple CarPlay connectivity suites won’t go amiss, if Honda is seriously looking for an upgrade, though.

If only Honda could bring the new 1.5-litre turbocharged petrol engine along with it…