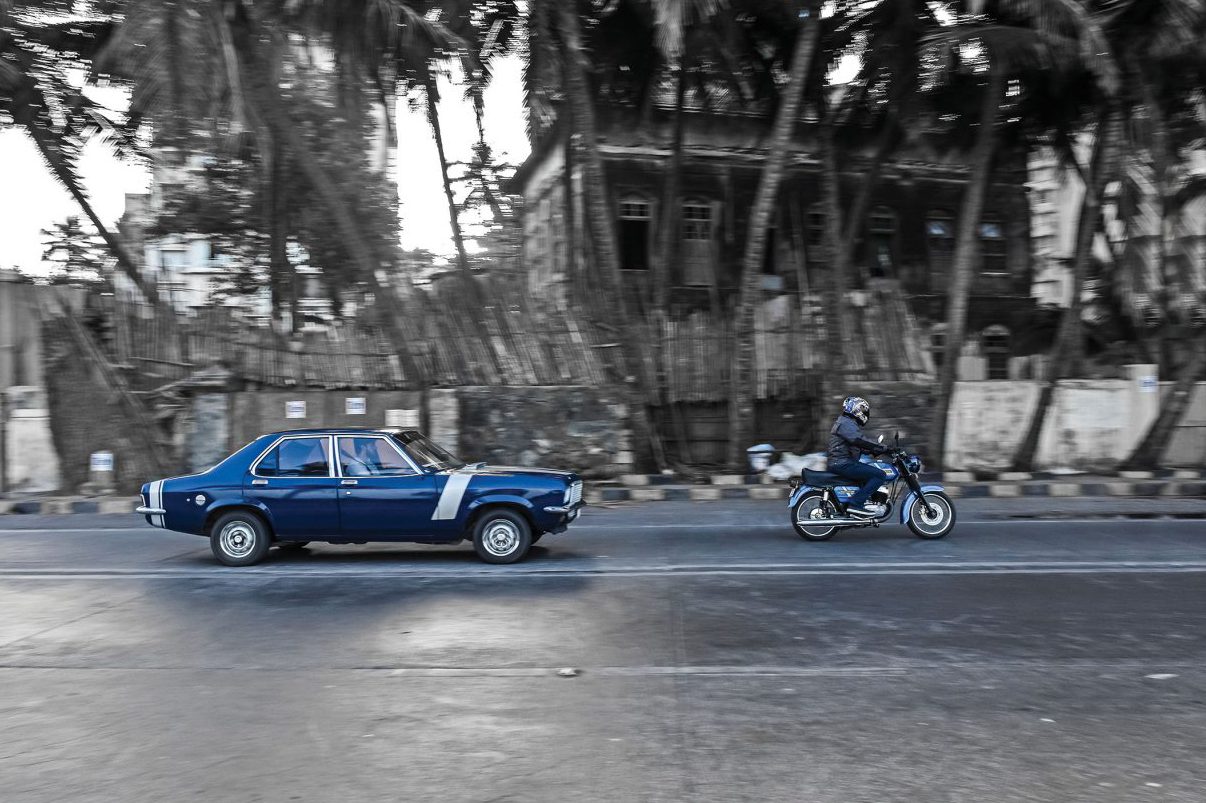 The interconnectedness of things is as apparent as it is impossible to completely unravel. That’s probably why we look away when afforded a peek at it. It’s one bloody big mess, too much trouble for no perceivable gain. But it has a way of finding you, one way or another, just as this Yezdi Roadking found this Hindustan Contessa. This is the retro story from our bunch of Car Vs Bike specials this month, and as history usually does, it left me with a lot more than when I first met it. All I had to do was trip and fall on a metaphorical magnifying glass. Let’s start at the beginnings, shall we?

The Roadking’s story has its beginnings in a motocross racer called the CZ 250. In 1919, ČZ (Česká zbrojovka) was established as a branch of the Škoda Works Armament, meant for producing firearms, in Strakonice, Czechoslovakia. It started making motorcycles in 1935, and was merged with Jawa in 1948. After a couple of decades of making decent grand prix motorcycles, it abandoned GP racing entirely to concentrate on motocross racing because it meant blowing less money up into smoke on racing weekends. A few years down the road, CZ was a dominant force in motocross and the International Six Day Trial, winning seven world championships in the 1960s. In 1974, it nearly won again with the CZ 250, but politics born of whiny unsportsmanlike conduct robbed it of a well-deserved victory. Eventually, Ideal Jawa made the Yezdi Roadking, based on the CZ’s design, in India from 1978 to 1992.

The Contessa, Italian for ‘countess’, was made in India from 1984 to 2002. It came into being when in Hindustan Motors acquired the tooling for the Vauxhall VX Series made from 1972 to 1978 in Britain. This series included the Victor FE sedan (on which our Contessa is based), an estate version and also a lot more interesting 3.3-litre six-cylinder model called the Ventora. In 1974, a Ventora FE was used to build a one-off racer with a 5.0-litre 476-bhp V8 for the Super Saloon Championship in Britain. The legendary Gerry Marshall was recruited to drive it and, due to its generally unwieldy nature, he promptly named it Big Bertha, though it won three of the six races it competed in, before it ditched its brake pads in the race at Silverstone and left a Contessa-shaped dent on the armco barriers. That was the end of Big Bertha, though its parts went into making the utterly dominant Baby Bertha with which Marshall turned races into events to see who finished in second place.

There’s enough history in the previous two paragraphs to embark on a year-long search through the internet and in books, a very tempting thought right now. But I shall limit it to pointing out that 1974 was a bad year for the racing predecessors of the Roadking and the Contessa, a fact I wasn’t aware of until the moment I typed this very sentence. In India, both were high-end products for their respective manufacturers and did well enough to justify their existences, though they didn’t exactly make their rivals run for the hills. Several decades later, here we have an example of each, the Contessa that belongs to Naveen Richard and brought along for the shoot by his brother Rahul Richard, and my Roadking. 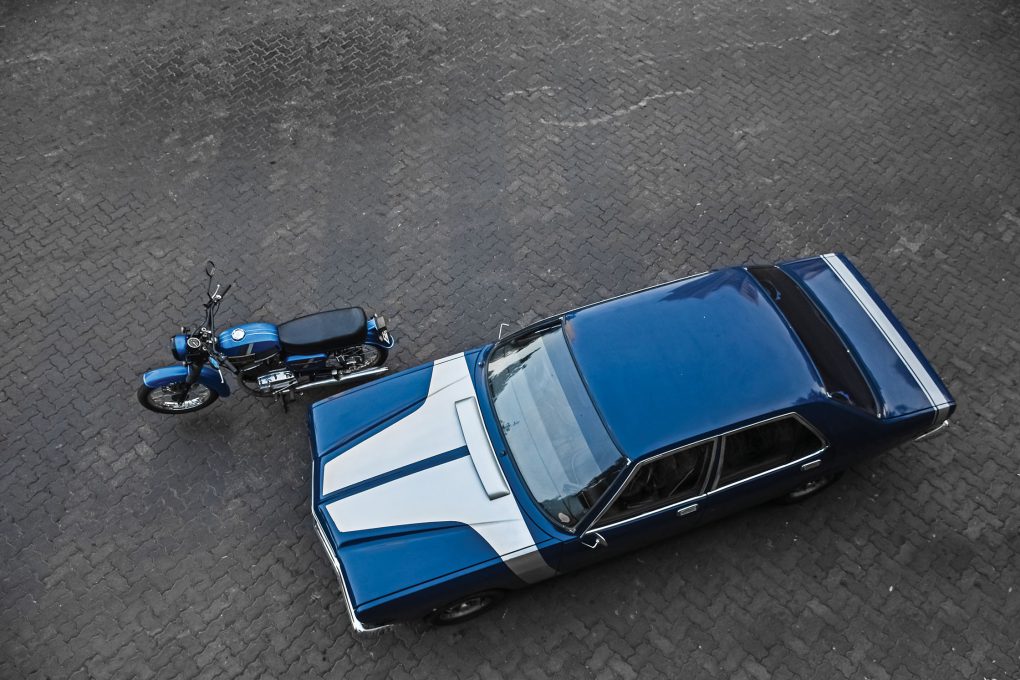 In a coincidental twist of aesthetic fate, both the Contessa and Roadking are painted blue with silver accents, with the former being darker and the latter a brighter expression of the shade that shares its name with the best genre of music ever. The Roadking’s original decal theme remains, though the Contessa is striped with nods to American muscle cars which is a rather pleasing sight. Yet another tribute in that direction came to light… er, sound when Richard showed me a button which when pressed honks to the tune of The General Lee’s horn from the movie The Dukes Of Hazzard.

As Wikipedia later informed me, the tune is the beginning of the song Dixie, one of Abraham Lincoln’s favourites and which he played at General Robert E. Lee’s surrender at the end of the American Civil War in 1865. No such coolness on the Roadking sadly, though it does have two roaring pipes which act as continuously smoking horns that make people surrender their attentions in the Bombay Traffic Wars of 2019. Coming back to the machines at hand, the Contessa’s long hood makes for a nice contrast to the Roadking’s stubby proportions. But here’s where I discovered that the Contessa is a bit of a spatial paradox.

Despite its length and width, there’s not that much space on the inside for a guy who’s six feet tall. That’s probably because most of the space contained within its dimensions lies unused under that bonnet. The 1.8-litre motor sourced from Isuzu isn’t exactly lost in the engine bay, but you do get the impression that you’re looking at a big needle in a small haystack. Opening the Contessa’s hood in Mumbai, we ran the risk of real-estate developers finding that amount of unoccupied space and immediately starting construction in it, even as we were left wondering where we could find a big fat V8 to install in its rightful home. After all, that’s the done thing when you have more space under the hood than in the cabin.

In keeping with my own tradition of humouring old machines, I drove the Contessa in a predetermined state of happiness. And the Contessa indulged my enthusiastic foot-stabs at the throttle pedal with a genial temperament that is so very period. Put it on a dyno and the graph will print in a tone of nostalgic sepia. That 87-bhp inline-four might look inconsequential, but it does its best and that’s surprisingly enough. It’s smooth and unstressed, almost in a ‘why bother’ way, and each upshift adds just the right amount of speed to proceedings.

Ride quality is still fantastic thanks to the soft suspension mounted on the axles that live in different pincodes. It steers well, too, as long as you mean ‘steer’ as ‘moving in the intended direction in an overall ambiguous manner’. Roughly the same sentiment is true of the brakes which apply themselves to their assigned function with the amount of enthusiasm reserved only by government clerks. This isn’t a roast of the Contessa’s abilities in any way, though, just a reflection of the times it was built in. And that’s also true in the way the Contessa still has the soul to engage its driver despite its obvious shortcomings. I suppose that’s what they call ‘character’. Especially when I could use that horn and immediately feel a lot happier.

That same happiness presented itself when I pumped the Roadking’s kick a few times and it woke up loudly like a drunk uncle at a Christmas party, ready for more. In longstanding quirky tradition, the kickstarter flips forward to become the gear lever, and after an upward hook-and-pull with my left heel, we’re off. As with all Jawas and Yezdis, upshifts are with the toes and downshifts are with the heel, and don’t you do it any other way. This Roadking was fitted with a front fork and disc from a Bajaj Pulsar and 17-inch wheels with soft Michelin tyres, so there’s a bit of a difference in the way it rides compared to a stock one. But since I intended to ride it frequently, I couldn’t bring myself to rely on hopes and prayers when it came to grip and braking, and changed everything as best I could.

The Roadking, in return, rewarded me by seizing its piston four times and demanding a new one, which I duly provided for its cylinder to swallow. So far, after a lot of fettling, it’s running fine, loud and clear. And I’m so glad I didn’t sell it in a fit of rage. After riding all kinds of Jawas, Yezdis and most Indian two-strokes, I am of the firm opinion now that nothing quite feels like a Roadking, not even other Yezdis. At the time of its launch, the company claimed 16 bhp from that 250cc motor, though I’m sceptical of that number even after a thorough rebuild of the motor. But that doesn’t take away from the fact that a properly dialled-in Roadking is a thing of joy. 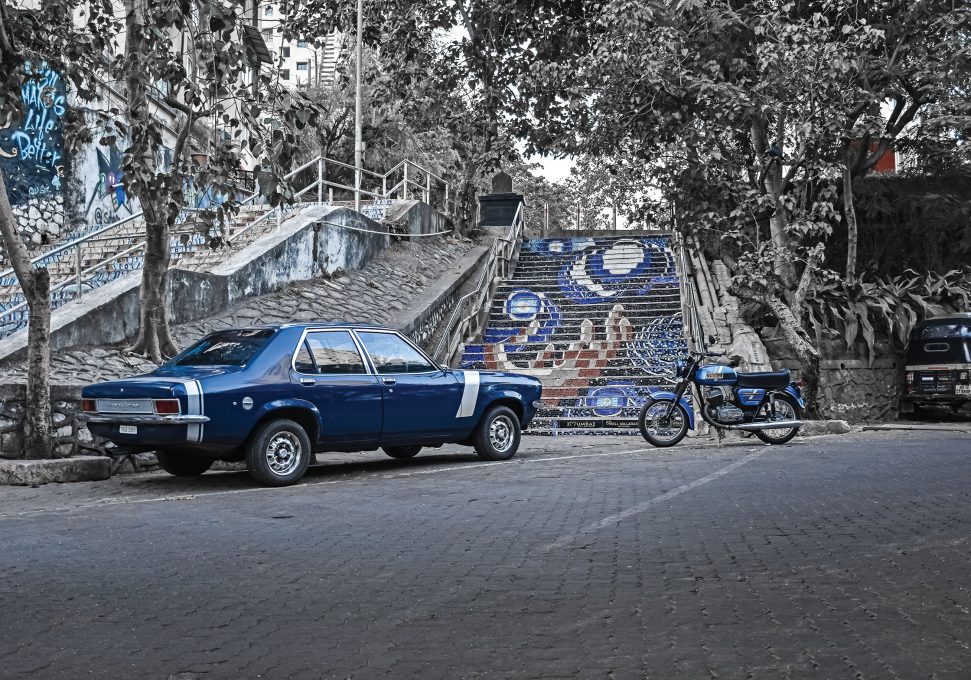 The same ‘why bother’ approach found in the Contessa is present in the Roadking as well, and I realised it’s this laidback character that makes these two so enjoyable. Get in/on one of these, and it’s a Sunday morning no matter what the calendar tells you. Thoughts of CZs and Big Berthas are far from your mind as these machines become travelling paintbrushes that colour the road you’re moving on. Whether it was sitting in the Contessa or on the Roadking, both turned the smartphone in my jeans pocket into a jutting nuisance. ‘You don’t need that thing in here, boy,’ they crooned in chorus. ‘Just relax and play the blues till the road runs out.’ The 10 GB of RAM in my pocket didn’t know what to do with itself. And how would it? It was 1974 all over again.

Honestly, I didn’t know what to expect when these two met one morning in Mumbai, both with their connections to what-if motorsport stories, both salvages from foreign lands that inspired thousands of Indian enthusiasts in a time that now seems long ago. But a morning spent with two seemingly insignificant machines made me see that history is deeper than we will ever understand, and connections even more so. Think about that for a bit while I go fight the growing impulse of turning the Roadking into a Falta replica. 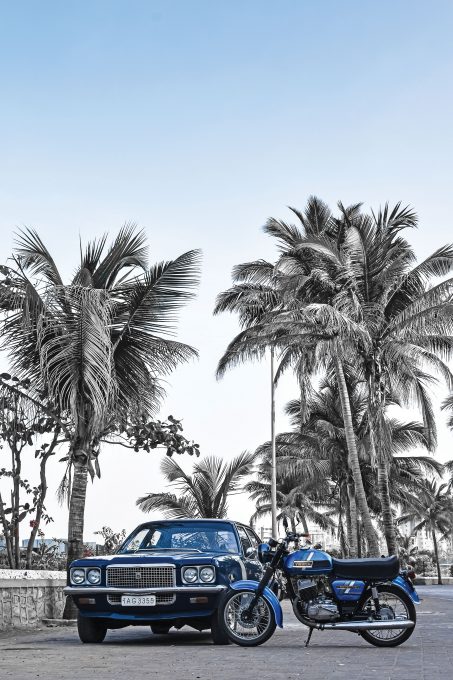