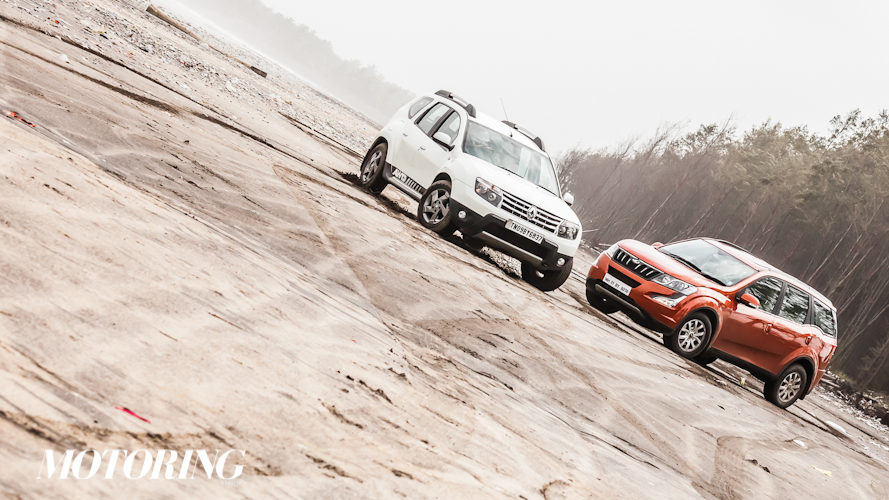 For the longest time, the default choice for someone looking for a Rs 15 lakh vehicle was the Renault Duster. Not just SUVs; even car owners were swayed by its virtues. The XUV5oo was aiming for the customer a step above, but never managed to appeal to the mass audience the way the Duster did. Mahindra has now given the XUV a new set of features and a little mechanical tweaking as well, making it a better vehicle. Does it manage to better the Duster, though?

The XUV is still recognisably one, but there are changes to its looks. There’s a new bumper and bigger foglamps that have a chrome surround that extend vertically right up to the headlamps. Above them is a new set of headlamps with blacked-out backgrounds. An LED light guide snakes its way between the projector low-beam unit and the conventional bulb-and-reflector high-beam unit, and this element turns heads, especially at dawn and dusk. It’s still very busy, though, and the Duster, despite following many of the same cues, looks more integrated. It also has blacked-out ‘lamps, it’s got the chrome strips on the grille, and it’s also got the faux aluminum skid plate at the bottom of the bumper, but the effect isn’t as premium as the XUV, either. Round One, then, is anyone’s guess. If you like your design busy, it’s the Mahindra. If you prefer flying under the radar, the Renault it is.

From the side, however, the differences are stark. There are more cuts and creases to the XUV, the rising window line lends it more sportiness, and the wheel design looks more premium. The Duster’s plain sides bode well for repair costs, but those low-rent door handles don’t do it any favours. The Mahindra also offers mirror-mounted indicators and the window line is underscored by chrome. At the rear, both SUVs compete with similar offerings: a horizontal chrome strip above the number plate recess, vertical tail-lamps and a vertical rear hatch. There are some significant differences as well — the Duster opts for small ‘lamps, while the XUV prefers oversize ones with extra detailing on the lenses. The Duster gains points for the faux skid plate at the rear; the Mahindra ignores it completely.

Overall, the Mahindra looks like a more expensive vehicle… which is exactly what it is.

The Duster has made the effort to liven up its interior with the touchscreen sat-nav system, dials with yellow needles and white backlighting and leather upholstery. The AC vent for the rear seats between the front seats has been deleted as well. The seat height adjustment is a very basic one — you either have it all the way up or all the way down. The dials also have been shared with the petrol, so the diesel engine uses up only half the tachometer’s available sweep at the fuel cutoff. The shift indicator helps a little, but it isn’t a replacement for a clear set of dials. All the essentials are there: effective air-con, seat height adjustment and a decent audio system. However, it’s only just enough and doesn’t feel like the interiors live up to the sticker price of  the Duster.

The XUV, on the other hand, feels a lot more upmarket in comparison. Yes, it’s managed to cut down on the number of textures which makes it a lot less confused, but confused it still is — you’ll see three different colours and three different textures as well within a square foot on the dashboard in some places. However, there is a stark difference in certain touch points like the window switches — the Mahindra’s switches are a fair leap ahead on quality. There’s a new lighting theme, a cool blue one, and it covers the instrument dials, the centre console, the night lighting, the illuminated scuff plates and the puddle lamps that incidentally have an ‘XUV 5oo’ logo that they project onto the ground as well. There is beige, brown and black with silver accents and the pedals have aluminium covers. Be aware that the white roof lamps are very powerful — if your eyes take time to adjust to low light, use these judiciously. The leather upholstery is present, of course, and Mahindra offers a few unique features like the ability to change the background of the sat-nav screen to whatever image you want. The features list in itself is a mile long and among the things that the XUV offers and the Duster doesn’t are electrically-folding mirrors, a sunroof and side and curtain airbags.

The Duster offers only two rows of seats and a large boot, whereas the XUV has a three-row setup. The third row folds flat into the boot floor to make space for a large boot and two rows of seating. There is also more storage space in the XUV. The Duster’s narrow door pockets and single, closed glovebox make it a little less usable for a long journey, though the charging point at the rear almost, but not quite, makes up  for it.

SHAKE YOUR BON-BONNET
Under the hood there’s a marked difference — the Duster has a 1.5-litre four-cylinder motor, while the XUV gets a 2.2-litre one. The Renault makes 108 bhp and 25.3 kgm to the Mahindra’s 138 bhp and 33.7 kgm. Both exhibit turbo lag, but it is more pronounced in the larger engine, because peak torque arrives at a relatively high 2800 rpm. The smaller engine, conversely, has its torque peak at 2250 rpm, which is still a little high by today’s standards. Both engines have a very flat response from the time the turbocharger starts huffing away to the redline. Both offer 6-speed gearboxes, and one of the significant changes under the skin of the new XUV is the gearing — it has been shortened. It is a good thing, because the big SUV weighs a fair bit more than the Duster, and coupled with that high torque peak, means city driving wasn’t very easy. The lower gearing helps it pull cleanly from low revs in any gear including sixth, which makes overtaking on the highway also a lot easier. The Duster has always been a quick enough vehicle, but the gearing does feel a little strange in traffic — first isn’t tall enough to keep up with any more than crawling traffic and second gear can’t do the Mumbai rush-hour crawl without a lot of clutch work. Any other conditions, though, and the gearing feels as good as can be.

WHAT ABOUT THE CURVEBALLS?
The Duster is the lighter of the two. It is also the SUV of choice for a lot of people because of the car-like handling. However, the FWD format has been very limiting for it — but with the AWD setup, the tyres are no longer at a loss at what to do with the torque handed to them. The system feeds power to the rear wheels when the fronts lose grip and the Duster just holds on for dear life, long beyond what you imagined to be its limits. The AWD still doesn’t make it a true off-roading vehicle (you might have to switch the tyres if you’re seriously interested in going off the beaten path), but what it does is up the fun factor of the Duster, something which we didn’t think was possible.

If there was one Achilles’ heel for the XUV, it was its handling. Sure, it was the best-handling Mahindra by a fair margin, but the new Scorpio took on that mantle when it launched and the XUV had a little catching up to do with the Duster. Enter a stiffer setup — the new XUV doesn’t pitch or roll like it is on the high seas any more. There is more control, there is more feel and there is a little more predictability on the limit. There is ESP to keep things in check, of course, but you’re always aware of the weight. We have the 2WD version here to try and keep costs as close as possible, and all that means is that it understeers a lot. The tyres start squealing very early and the ESP also errs on the side of caution, so there isn’t much lateral acceleration with the XUV. It has definitely improved over its previous avatar, but when pitched against the lighter, grippier Duster, it just cannot make the cut.

WHICH ONE IS IT?
Let’s get the price in the picture, first. The Duster is significantly cheaper at Rs 13.63 lakh, ex-showroom, Delhi. The top-spec 2WD XUV5oo you see here costs Rs 15.2 lakh, ex-showroom, Delhi. For two lakhs more you get much better looks, much better quality interiors and the massive flexibility that third row offers. There’s also that X-factor present in a thousand tiny details like the door handles and projector headlamps where you know you’ve spent the extra money. However, the Duster starts looking like a lot of value when you realise how well it can cope with both on- and off-road situations. However, the quality of the interior will always be a question mark when compared to the XUV. This, then, is a straight question of paying more to get more out of it; would you rather pay more money and have a happy set of occupants or go for the value proposition and plaster a smile on the driver’s face? There is no clear answer to this. At Motoring, we’d always pick the Duster because of the smiles we know we’ll extract from it, but it is also at the end of its life cycle and a new Duster is expected soon. And even we admit that it’d make more sense to put your money on the more premium product, the XUV5oo.