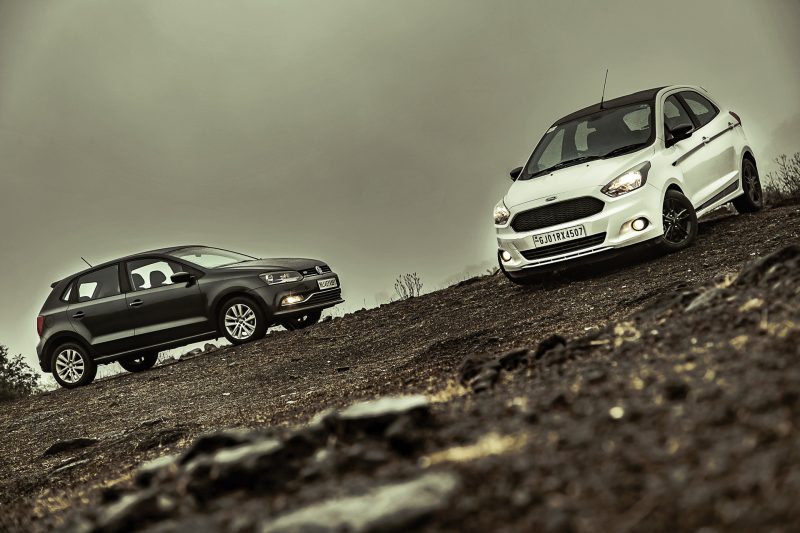 Regular hatchback duties — fitting in small parking spaces, frugality, affordability, etc. — don’t commission the need of a powerful engine. But when you seek driving fun from your primary car, that’s exactly what one needs — a taut chassis, a more powerful engine likely from a larger car, but without compromising too much on its everyday abilities. It all started in the ‘70s, when the mk1 Golf GTI was launched. It went on to redefine the rules of motoring, by offering a rather affordable way to enjoy driving. A few years after the GTI came a slightly different take on the topic; one that relied more on torque than revs, the Golf GTD. Which of the two turned out to be more successful is anything but unknown, but the idea of a diesel-powered ‘hot’ hatchback still appeals to many. Even at the lower end of the segment, cars like the Polo GT TDI and Ford Figo Sports Edition try to emulate the GTD’s formula. We try to see if they are successful in that. 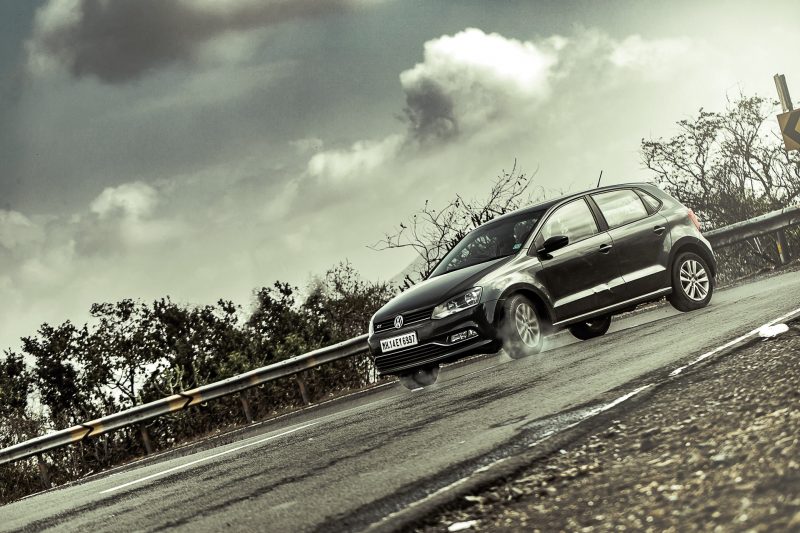 Starting with the car with which the GTD shares its name — the Polo GT TDI. Wonder, you must, because that’s not quite the same name. No it isn’t, but VW didn’t always sell the performance-orientated diesel Golf under the GTD brand; the GT TDI branding was adopted for a generation or two. And that’s no bad thing, as the Polo GT TDI, in itself, is a good place to start if you’re looking for a car with the same formula as the GTD. It uses a 1.5-litre diesel engine (108.6 bhp@4,000 rpm and 25.5 kgm@1,500-3,500 rpm), comes with a 5-speed manual, and offers the high-speed stability like almost no other in the segment. As is the case with the Polo GT TSI, this one is offered with the extra ‘GT’ goodies over the regular car, and is priced at Rs 9.32 lakh, ex-showroom, New Delhi. 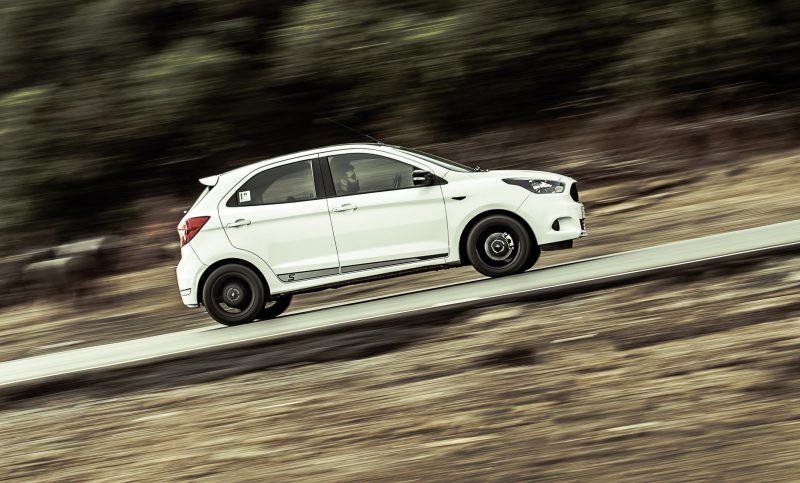 The other contender is the Ford Figo Sports Edition. Like the GT TDI it’s also based on the regular version of the car, with changes made to the suspension, wheels, and a bit on the exterior part. Also like the Polo here, its 1.5-litre diesel engine (99 bhp@3,750 rpm and 21.93 kgm@1,750-3,000 rpm) can offer surprising performance figures, with three-digit cruising speeds becoming commonplace for both of them. Priced at Rs 7.21 lakh, ex-showroom, New Delhi, it’s easier to buy than the Polo, but is smaller on the outside, too. 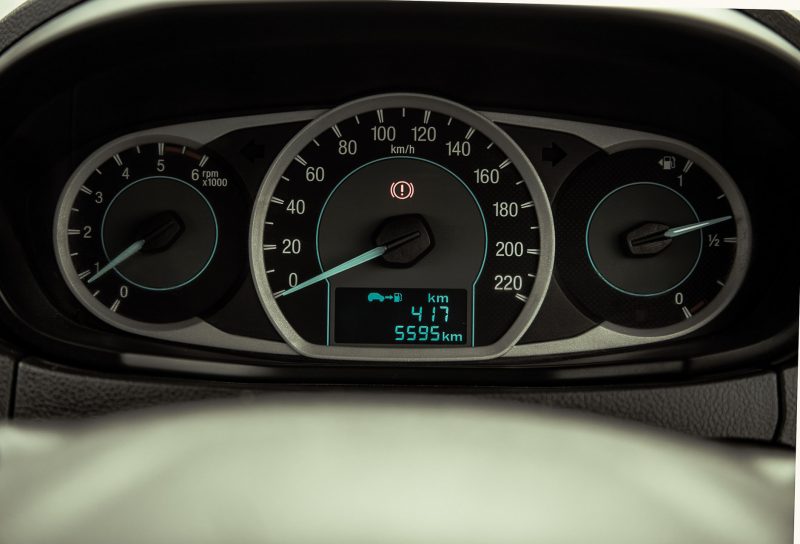 Let’s get to the meaty bits. If these two were being compared for looks alone, the Figo would have taken the cake and eaten it, too. The subtle changes made to the exterior, most notably in the form of the new 15-inch alloys, make the car look more attractive. The Polo in comparison feels a little old, and it may be down to to personal preference (like I believe the GT TDI will continue to look as good in, say, five years), it is a bit more graceful. In our case, though, when it was pi**ing down, the Carbon Steel shade of the Polo didn’t quite make as lasting a visual impression as the Oxford White of the Figo.

The interiors of the two reflect the same personalities as the corresponding exteriors. The Figo’s cabin is slightly newer but not necessarily better. The dashboard layout has begun to get a bit long in the tooth, and I’m unsure if you can remove the rather basic audio system and retrofit a better one. Since Ford decided to offer the Figo Sports Edition in the top-but-one Titanium trim,  it also loses out on the SYNC  connectivity system. 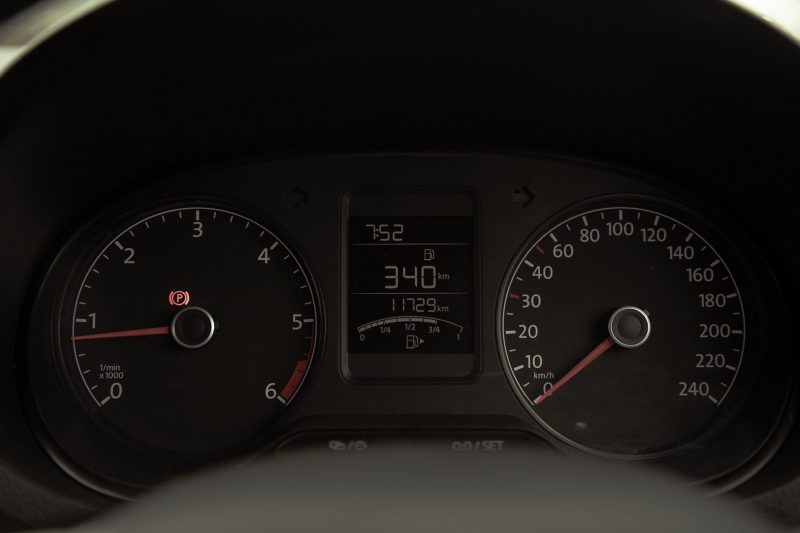 The higher-priced Polo feels better-built in comparison, even on the inside. It’s not exactly loaded with the latest features and the overall layout isn’t what you would call exciting, either. But the standout build, an almost impeccable driving position, and the fit and finish make up for that. Of the two, it’s a marginally better place to be. Unless you’re at the rear, because the Figo has a better utilisation of space, especially at the back.

But space wasn’t going to be the top priority for a buyer in this segment. From behind the wheel, the Polo feels more eager, both to your throttle and steering inputs. There’s ample torque and it keeps on pulling easily, much beyond a) what a diesel-powered car ought to, and b) the speed limit. Sharp turn-in is complemented further by the steering ability of this thing. At motorway speeds, it keeps its composure, although, naturally, the engine noise can be a pain. And despite the composure, body roll isn’t absent, and the ride quality on bad roads isn’t great, either.

Switch to the Figo, and the ride quality sees a ridiculous amount of improvement. At low speeds, it soaks in bumps quite wonderfully. And while it lacks the eagerness of the Polo’s, the 1.5-litre diesel engine of the Figo offers a more linear power delivery. The light steering isn’t quite as crisp, and the high-speed stability, probably due to the tyres, is not exactly a match for the Polo’s. On the bright side, the engine feels a tad keener towards the redline, and the gear shift, which although requires more effort, adds to the driver engagement.

It’s true that with a diesel engine in the equation now, the definition of ‘hot hatch’ has to change. But even then, of the two, there isn’t an outright winner. And while VW has had the advantage with whatever it learnt from the Golf GTD (in various generations), the Polo GT TDI needs some freshening up. And not just in the form of new LED head lamps and that sort of a thing.

The Ford here isn’t any far either. It’s certainly less expensive, so it does get away with smaller niggles. If we look at the larger picture, the Figo Sports Edition also has some work to do. The tyres are far from perfect, and the hydraulic power-assisted unit of the previous generation Figo is missed here.

Apart from the aforementioned, there are little things in both cars that appeal to enthusiasts. In the Polo, that would be the glowing needles in the instrument panel, the thin-rimmed steering, and of course the sure-footedness. The Figo’s smaller size (makes it quite the diesel pocket rocket here), distinct styling, and a more pocket-friendly price work in its favour as well.

So, then, you must ask, which one of the two makes more sense for you. I’ll keep that one simple. The Figo Sports Edition feels a little under-specced considering the Titanium+ trim on the regular car offers a lot more, except updates on the styling, suspension, and wheels. For what it is, this Figo isn’t a bad car and almost deserves every penny of the money you would spend on it. Give it better tyres, and you’ll be a happy customer. And if your happiness is dependent on the extent to which you can modify your car, then the Polo GT TDI will not disappoint. It’s more expensive, yes, but it’s also more grown up, offers better stability, and is certainly a step up from your usual intra-city hatchback. To keep up with the Figo ’S’, there’s also an optional, special edition ‘Sport’ trim on the Polo with larger (16-inch) wheels, similar contrast roof, mirror, spoiler combo, and body graphics, among other changes. 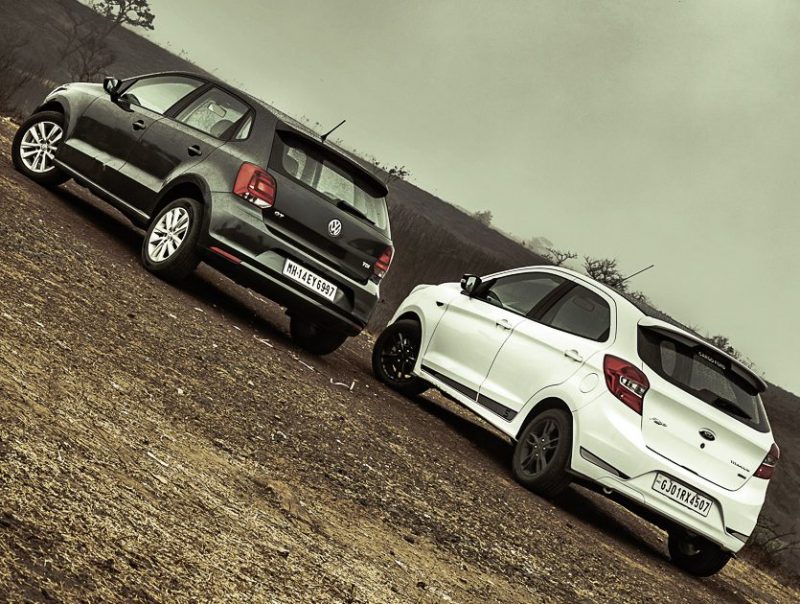 Choose the Figo if your car is bound to do more short commutes and only occasional trips on the highways. Choose the GT TDI if opposite is the case. Like the GT TSI and Baleno RS that we featured last month, neither of these two is a proper hot hatchback, hence failing to do justice to the GTD reference made at the beginning. But as more focussed diesel-engined derivatives, they do a fine job. Which is what matters, actually!