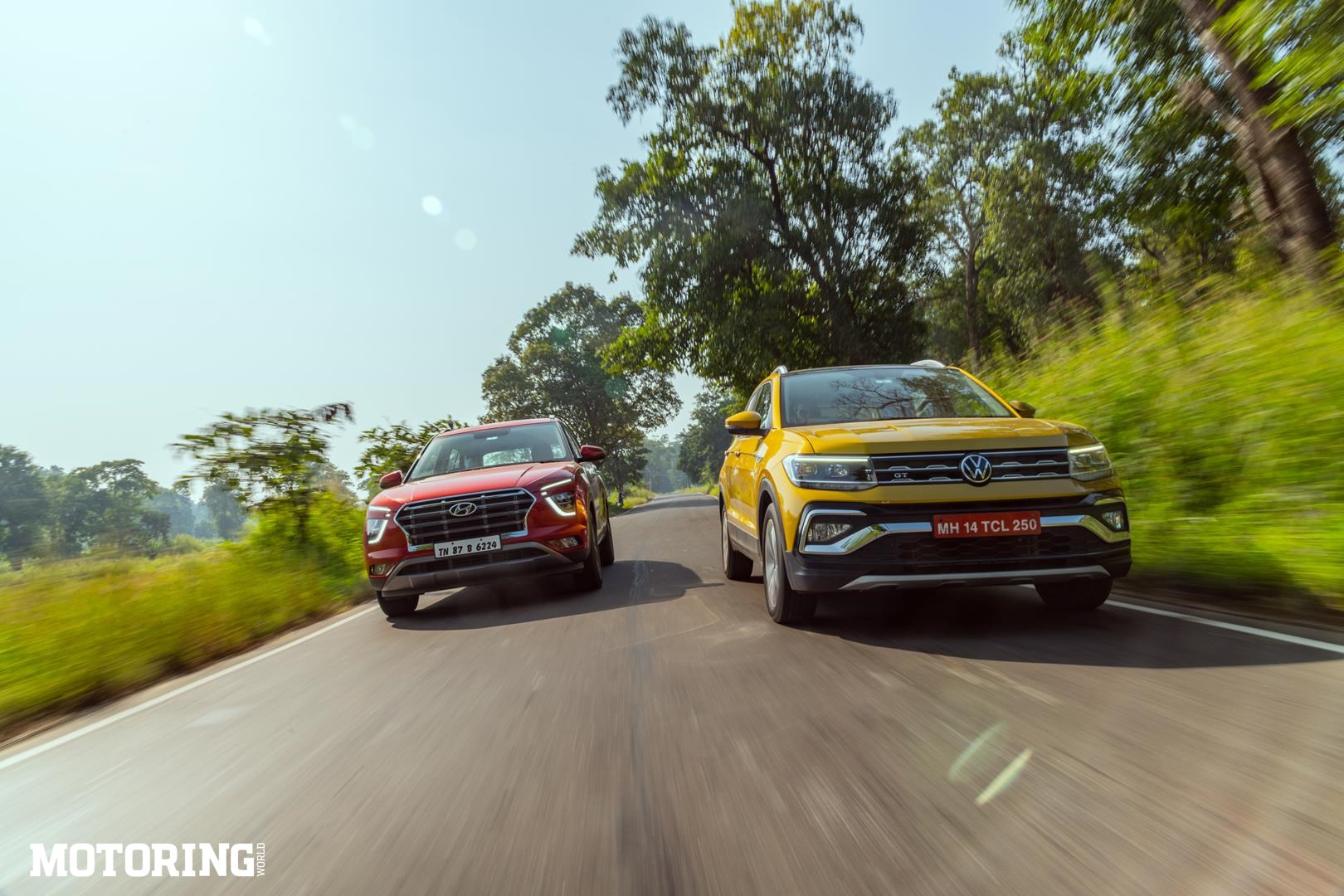 Some say Volkswagen’s a little late to the midsize-SUV party and I can see why. The Taigun has come to the Indian market about one and a half years after the second-gen Hyundai Creta arrived, which some see as too little too late. The Creta is an absolute beast on the sales charts due to a number of factors, having topped the monthly SUV sales listings a number of times. In addition, Hyundai’s name in India is synonymous with technology, frugality, and a fuss-free ownership experience. Meanwhile, VW has neither the consumer sentiment nor the service centre-backing to match. However, the Taigun is an excellent product in itself, and I just had to know whether the Taigun would make its mark against the reigning midsize-SUV champion. 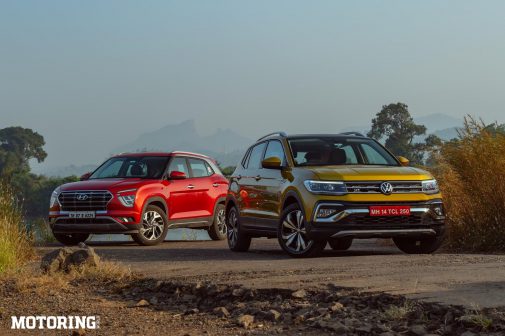 At the outset, let me say that I’ve never been a fan of the way the Creta looks. Some have grown to like it and some took an instant liking to the design, though all agree it is rather bold. To me, the large chrome grille is starkly juxtaposed with the slim light units at the front, while the protruding tailgate design does the same with the small LED tail-lights. In its silhouette, though, there is a hint of sportiness, with the roof tapering down towards the rear windscreen.

Honestly, barring the golden colour of our test car, the Taigun is much easier on my eyes. Stolid and safe, the Taigun’s front end is unlikely to cause a ruckus, other than the excess of chrome on the front bumper. The VW SUV is far more pleasing to look at from the rear-end — the LED tail-lights that extended across the sculpted boot section are particularly eye-catching, especially at night. Nonetheless, both cars have the requisite upright SUV styling cues that we Indians just seem to lap up.

Although one can argue that the Taigun’s interior, with a dual-tone finish and lighter tones, looks more inviting than the Creta’s all-black one (exclusive to the Turbo version), a closer look will tell that person just how wrong they are. It seems like Volkswagen has opted to use materials more for their durability than their seeming premiumness. It is commendable that the Creta’s cabin feels both long-lasting and luxurious.

A small quibble is that despite the Creta having an electronically adjustable driver’s seat, the Taigun’s pilot’s seat is better bolstered and will be far more comfortable over a long distance. However, passengers in the back of the Creta will feel more comfortable than those in the Taigun, and that’s in spite of the VW’s near-flat transmission tunnel. The Hyundai’s panoramic sunroof also helps the cabin feel airier than the Taigun.

It is heartening to see the democratisation of certain tech and features. Both SUVs get what used to be premium features such as connected-car tech, ventilated front seats, six airbags, tyre pressure monitoring, climate control, cruise control, a rear parking camera, paddle shifters, and the like. You may be surprised to know that the Taigun gets some kit that Hyundai doesn’t offer on the Creta — ambient lighting, automatic wipers, an engine start-stop system, and cylinder deactivation. Nonetheless, the Creta is still better-equipped overall, with features such as an electronic parking brake, a larger infotainment screen, rear sun shades, and driving modes.

Driving the Creta in Eco mode is not recommended for anything other than stop-go traffic as output to the front wheels is restricted to maximise economy. Even in Comfort, the default mode, Hyundai’s 1.4-litre 138-bhp turbo-petrol engine doesn’t come across as energetic as the numbers suggest. Sport mode definitely feels, well, sportier, and you can use the paddle shifters to make decently rapid progress. Keeping the engine in its powerband — 2000-5000 rpm — is recommended as the four-pot unit doesn’t like being revved too hard. 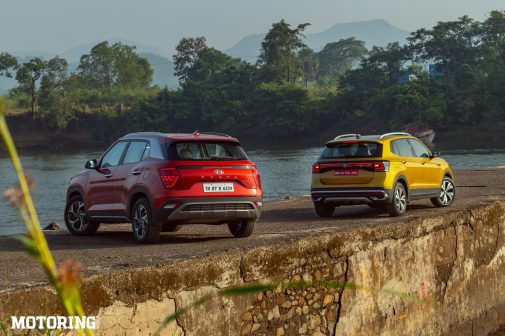 Still, it’s not even close to the surge of power that comes from the Taigun’s 1.5-litre 148-bhp turbocharged petrol unit. There’s a strong enough shove at any point in the rev range, though it’s not enough to overwhelm the tyres. What’s also nice is that this engine can play the hooligan and the city-slicker with equal aplomb, and a large part of that is thanks to the superb dual-clutch automatic unit. A truly staggering point is that the Creta’s 7-speed dual-clutch unit feels clunky and slow-shifting compared to VW’s 7-speed unit. The Taigun’s gearbox will go down a couple of notches with the barest of hesitation, while the Creta’s transmission will hunt for the right gear for a few moments longer. 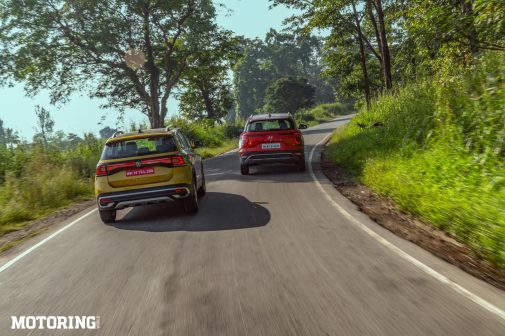 A cushy ride has been a hallmark of the Creta since the first-gen model, but what that means is that the handling leaves something to be desired. The body rolls when pushed into a corner and there’s significant amounts of pitch when braking hard, too. Braking performance is excellent, but the way the car pitches forward takes away some confidence. Despite the softer suspension, though, the Hyundai doesn’t feel ponderous at high speeds, making it an able highway commuter.

Meanwhile, the Taigun is an absolute blast to drive enthusiastically. The chassis is tight, the suspension is stiff, the body roll is superbly contained. There’s massive fun to be had on a set of twisties as pushing the Taigun is rewarding. Even the brake feel and bite inspires confidence, and changing directions suddenly doesn’t upset the VW at all. The only aspect that isn’t performance-oriented is the steering which lacks feel. It’s direct enough, there’s enough heft, and turn-in feels more than adequate, but if it was more feelsome it would have elevated the Taigun’s performance credentials to the next level. The only real downside is the low speed ride quality, which is on the harsher side. 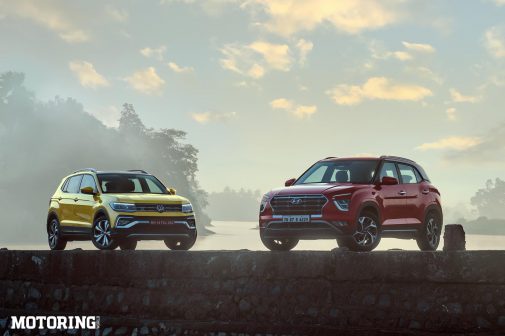 So, is the Taigun a worthy contender? Absolutely! This range-topping GT Plus version, priced at ` 17.54 lakh, ex-showroom, India, even undercuts the Creta Turbo SX(O) by ` 33,000, which is commendable. If you’re in the market for something that’ll be fun, good looking, well built, and durable, buy the Taigun with your eyes closed. However, this doesn’t mean that the VW will, by any margin, overthrow the Creta as the best-seller in the segment. What continues to make the Creta desirable is its ride, the sheer number of features, and the peace of mind associated with owning a Hyundai. At least, the Creta now has worthy competition coming from a brand that isn’t a brother from another mother.