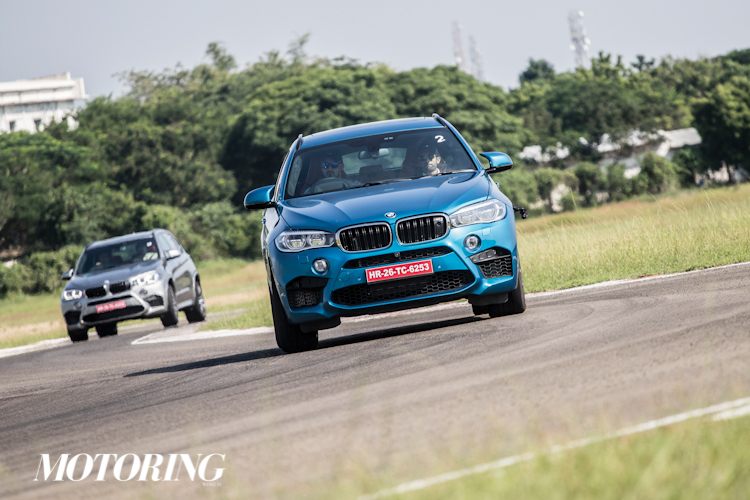 The thing about SUVs posing as racetrack weapons is that practicality takes a bit of a rear seat (pun very much intended). The logic behind it is anything but sound, but I suppose it gives the engineers a challenge and more often than not, when it’s done well, it’s fun to witness the results first hand. In this case, the regular BMW X5 and X6 have been stripped of all that was deemed essential, flipped upside down and shaken until all the loose bits fall off, and then the ‘M’ guys bolt on an engine that puts out some scary figures and replace all the other parts with carbon-fibre. The result, as you can see, are two visually arresting SUVs that could put a few sportscars  to shame.

Say hello, then, to the BMW X5M and X6M. Undoubtedly, what makes these two absolute brutes is the fact that they’re powered by 4.4-litre V8s that put out a ridiculous 567 bhp between 6000 and 6500 rpm. BMW says it’s the most powerful unit it’s ever developed for an all-wheel-drive vehicle. The torque figure is as silly: 76.4 kgm made between 2200 and 5000 rpm, which sounds about enough for the tyres to spin holes into the tarmac. Both cars, BMW states, can crack 100 kph in 4.2 seconds while simultaneously making you question what sort of lunatic would do school runs in these things.

Before I get to the driving impressions, though, there’s a bunch of things on the outside and in the cabin that are added to separate it from its regular versions, which need mentioning. There are large air intakes at the front, a kidney grille with twin slats, side gills, a pair of very neatly styled wing mirrors and there’s even a spoiler exclusive to the X6M. Inside, there’s more of what you’d expect: leather, some more leather, a heads-up display, an M-specific display that has the gear indicator, rev band and shift lights, and more leather. Lovely cabins, all in all.

The heart of the matter, though, is the driving experience which BMW says is spectacular, and to prove it, it let a bunch of journalists loose at the Madras Motor Race Track, armed with the new X5M and X6M. How’d they do? Simply put, pretty damn well (the cars, not the journalists). The X5M and X6M have a weight difference of just about 10 kg, but you’d be hard-pressed to notice it if you’re using it on public roads. What you will notice, however, is the brutality of its acceleration. In that sense, letting us loose on a racetrack was probably a wise decision on BMW’s part, because these two love being pushed, and pushed hard. Steering and suspension settings set to Sport Plus, the car handles like it’s on rails around the track. The 8-speed auto ‘box is super slick and fast, especially when you’re playing with the paddles behind the wheel. When you’re approaching a corner and braking hard, the paddles feel reassuringly intuitive and do a brilliant job of shifting up or down the cogs, as is the requirement. And right through, you’re marvelling at the conversation you’re having with the steering as it guides you through a corner; it’s your buddy in shenanigans of high-speed cornering. Speaking of which, fiddle with the traction control button at your own discretion, because despite the all-wheel-drive setup, the pair is more than willing to wag its tail at the slightest provocation.

That’s the thing, though. When you’ve over-committed going into a corner and you just know that you’re going to be force-fed into the scenery in a matter of seconds, that’s when they surprise you and give you an extra dollop of traction to save your incompetent behind. There’s a lot of clever mechanisms silently working under the car in order to make this happen, like Dynamic Stability control, Cornering Brake Control, Dynamic Brake Control and Dynamic Performance Control, among a bunch of others, so kudos for that, BMW.

Unfortunately, BMW only gave us time with the twins on the track, so a comprehensive review of the cars in regular conditions eludes us for now. In time, we’ll ask for these hooligans again and give you the rest of the report. However, what’s easily discernible is that these two Ms defy logic. They spit on the face of people who believe a perfectly natural duality can’t exist, one where an SUV can pose a credible threat on the track one day and be an adequate vehicle to drop the kids off and do a bit of shopping the next. Of course, the people who want this sort of duality are few and far between, and they’re also the sorts to probably have a boatload of money. So the 1.55 crore and   1.60 crore price tags for the X5M and X6M, respectively, shouldn’t faze them, really. What should is getting another shed built next to their garage to store all the spare sets of tyres. If you plan on hitting the track with either of these, trust us, you’ll need all the spare tyres you can get!