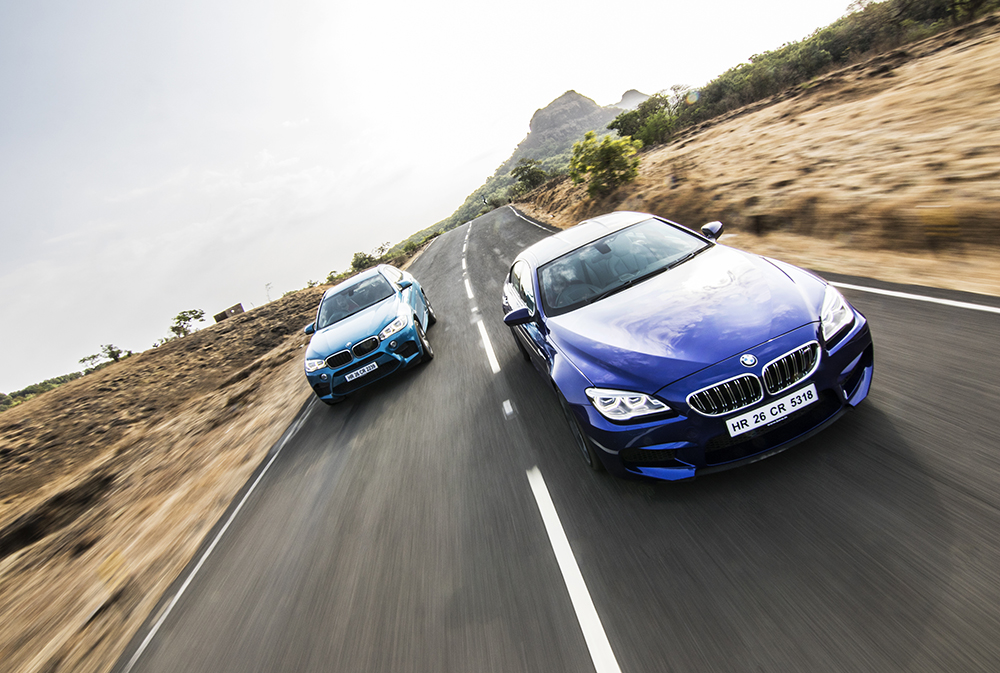 There are no two ways around it. The cars here, in an ideal world, are what should define your ideal rides. Instead, oligarchs and ludicrously dressed musicians are the sorts who cough up the money for cars like the ones you see on these pages, ones who will probably never see and appreciate what the BMW M6 Gran Coupe and the X6 M are capable of. It’s a sad by-product of the world we live in, one that questions intelligence and celebrates stupidity. I will refrain from going off on a tangent, though, despite my tendency to do exactly that. So what we have here are absolute monstrosities that teach you a thing or two about dignity and restraint. That’s a peculiar statement, I know, but the more time I spent with them, the more it kept hitting me that that, in fact, is the case. And, if you’re wondering why two seemingly different cars deserve the same space, there’s a lot more in common with these two than meets the eye.

The X6 M Coupe is frightening. Not because it looks like it just swallowed a hippo whole and is on the prowl for more, but because it plays the deception card oh-so-well. I remember driving it on the track a few months ago and it absolutely blew me away. The fact that it can hug roads so well and power through just about any corner without even a hint of understeer or oversteer beggars belief. It’s got a nice set of vital stats, and they’re all very big numbers that take some time to believe: A 4.4-litre twin-turbo V8 powers this hulk, giving it 567 bhp and 76.4 kgm which, put simply, is more than enough for most occasions. The smallest number it has, in fact, is its 0-100 kph time – a none-too-shabby 4.2 seconds. The X6 M goes beyond the numbers, though. The road we chose to drive it on had a few twisties that are quite entertaining if you get them right, and I was genuinely surprised, even after having the car to myself on quite the technical track, with the way the X6 M handles itself. I won’t say it was born to do this, but there’s a willingness to comply with your needs that’s very interesting, to say the least.

Crank all the modes to Sport+, hammer down the gears via the paddle shifts, notice how delightfully the steering weighs up as you enter a corner and ram that throttle on the exit. The X6 M will have your back, and happily so. No unnecessary tail-happiness displayed, no hesitation, and definitely no going wide. Just find the next corner and repeat. To drive the point home, the media car we had wasn’t in the best shape, and by that I mean the tyres were quite a bit worn so grip levels weren’t even what they should have been. It’s truly astounding what this thing is capable of, and a point to note is that our previous comparison with this massive coupe and the Range Rover SVR had the writer as confused as I am about these two here, which you’ll soon find out.

An aspect of the X6 M that I mentioned earlier but didn’t expand upon is the fact that it goes about its business in such a dignified and restrained manner. Even at full chat, sure the engine’s loud and unmissable, but it’s nothing like the bark and growl that, say, an F-Type’s supercharged engine would make you listen to. It’ll barrel down an expressway and whizz past everything else on the road without being noticed. If it weren’t for those massive wheels (285/40 R20s up front and 325/35 R20s at the back) and that gorgeous Long Beach Blue, as BMW calls it, I’d be tempted to sum it up as a sleeper, and that really does have its appeal, honestly.

It shows in the way the cabin’s been crafted, too, because it’s such an exquisite place to be in. It’s hardly as loud as the exterior and if it weren’t for the few M badges here and there, you’d very well think you’re piloting or being chauffeured in a very luxurious car. To add to all this, once you tone down all the modes and get into the city traffic mode, the one that sucks the life out of you each and every time you encounter it, the X6 M does a pretty good job of just chugging along as well.

Switching to the other car here, the M6 Gran Coupe’s heart is one that’s shared with the X6 M. The same 4.4-litre twin-turbo V8 does the job, but the power figures aren’t; they’re slightly down on the X6 M, in fact – 553 bhp and 69.3 kgm. Does that make for a less intoxicating drive, though? You’d need to be some sort of track-star to tell the difference, honestly. What I will admit to is that the way the M6 puts its power down is quite different, and this is not just because of their differences in kerb weight. The M6 sits so much lower, and despite its considerable length, takes corners with superb ease. The trade-off, of course, is that you have to crab-walk certain speed bumps that you wouldn’t think twice about in the X6 M, but the M6 makes up for it when you’re pushing the car hard.

Get the car in Sport+ or, if you’re the lazy sort, just hit the M2 button on the steering boss, get the traction control to stop doing its thing and slide through a corner like the boss that you are. If you can, that is, because I’m incapable of sliding cars easily. The point here, however, is that the M6 is a bit more of a hooligan than the X6 M and yet, it’s not one that’s out of control. You’d need to tell your right foot to be perilously stupid to get the car to overdo it, and that’s what makes it slightly more fun to drive, for me at least, than the X6 M. Does that make it the better car, though? Not quite. I hate bringing the practicality aspect into a comparison like this one, but that’s just what the X6 M is when you put it side-by-side with the M6 Gran Coupe. Be it the ground clearance, the immense boot space, or even the fact that you’d be more comfortable in the back, it’s easy to see that the X6 M has its plusses. And If I’m honest, how often do you go sliding around corners in cars that cost as much as these two?

Does that mean that you’d be better off settling for the X6 M? Again, I’d be a little iffy in putting my money on that claim. They’re both such fantastic cars, and they’re so much fun to drive. Their relationship with speed is as intimate as they get, and that instantly propels them right up there in my books as cars that need to be considered. They’re both outrageous machines and have an immense amount on offer. The M6 is fast, I think it looks bonkers good and it turns heads, all right. Its cabin is as sumptuous as any and it even sounds different to the X6 M despite having the same heart, however subtle the difference may be. It still holds the same principles of refined aggression as the X6 M, and it will still keep you under the radar as compared to some of the more visually-bonkers peers in its segment. I don’t see a market here where cars like the X6 M and M6 Gran Coupe can thrive as yet, because anyone with this much money to spare would want his or her money to be blatantly obvious, and that’s an absolute shame. Given all that, what would the pick of the two be? It’s like choosing between your children and I’ll admit to being thoroughly confused about it, but I suppose I’d have to give this one to the X6 M. The reasons are as stated earlier, and not like it would make much of a difference, but it’s also Rs 10 lakh cheaper to buy than the M6 Gran Coupe. Does that make it easier for you? I don’t suppose so, but it was one heck of a time getting to drive them, so thank you for that, dear reader. I’m off for one last spin before I hand those keys back.