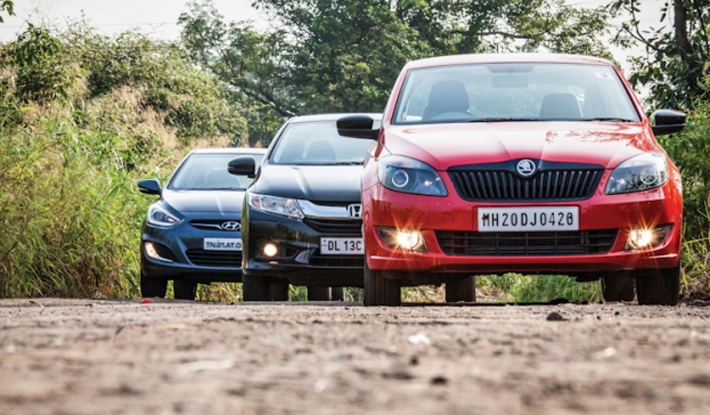 Once upon a time, the Honda City ruled supreme. Then the government decided to change the rules around taxation of petrol, and Honda struggled to sell what was a good product but with no oil burner. Runner-up Hyundai laughed all the way to the bank, but improved its products consistently. Now, though, the City has shown all who is boss with its oil-burner, and everyone else has to measure themselves against the yardstick that is the City — including the new-for-2014 Skoda Rapid, which has been updated with a bunch of features and the all-important shift to a new diesel engine that allows it to benefit from excise duty cuts.

Looks
The Verna has long been the standard for looks in the segment. When it launched, it was so futuristic, and that roofline that is a single curve along with the windshield and rear glass is a victory of design over practicality. Now, however, it doesn’t have the ‘wow’ factor, simply because there are so many of them running around. The mid-life refresh has brought out the diamond-cut alloy wheels and projector headlamps with LED running lamps, which make it look upmarket.

The looks of the City were something we were used to, and then Honda launched the current generation with its cues from the FCX. That front grille and headlamp section belongs in a manga book, and the rear in a BMW brochure. Nevertheless, the City looks the most futuristic of the three despite the wheels looking a little too small. The Rapid is the new one, then, with a mid-life refresh that doesn’t look much different from the outgoing one. Yes, that scarlet paint makes me weak in the knees, and our Black Edition test car had great black accents in the form of a blacked out chrome strip above the grille, headlamps, mirrors and wheels. Those wheels are the exact same as the ordinary car, and they’re an inch or two too small to pull off a slammed look.

Each of the three cars has their highlights as far as exterior design is concerned. It’s like having to choose between the Jessicas Simpson, Alba and Biel; you couldn’t get a group of people to agree on which is the best looker if you held a gun to their heads. The Honda City may not appeal to everyone, but its proportions remain the best of the lot, and there are no elements that look like they don’t belong. The most cohesive design in the group, therefore, gets the most points.

All three interiors, like the exteriors, follow a different design theme. The Verna has a cool blue lighting theme that runs through the instrument cluster and centre console. It was new when launched but now seems a little old-fashioned. Quality of plastics is good, and the seats are comfortable. Other than the fact that the Verna has the least head- and legroom here, it is a nice place to be — the nicest in terms of NVH, actually. The diesel engine is smoother than a gravy sandwich, there are no vibrations at all, and what little noise you hear from the outside world is at more than acceptable levels.

The all-new Honda City has a few party tricks, like legroom that equals the Nissan Sunny, and a capacitive touchscreen for the climate control system. The instrument cluster uses blue lighting that encourages efficient driving through green lighting which comes on when the revs and throttle input are just right. The center console houses the colour display which also displays the feed from the rear camera. Where the Honda loses to the others is, strangely, refinement. This engine is the Louis Armstrong of the segment, and at every single moment of your journey you’ll wonder if giving it a cough drop or two will make it sound less gravelly. It is smooth, but vibrations make their way felt through the pedals, and even while cruising on the highway at speed, you know it’s an oil burner under the hood.

The Skoda, then. It gets a three-spoke steering wheel that is truly lovely to hold, but it doesn’t get any phone-related buttons on it. The traditional three-box silhouette means it offers decent headroom and kneeroom, although in the present company it is middle of the road. Fit and finish is the best here, but its features list is disappointingly short. It doesn’t offer electrically foldable mirrors or mirror-mounted indicators, keyless entry and go, and a release switch for the boot on the bootlid itself. The Rapid’s cabin is nearly as silent as the Verna’s, with the levels rising only with high engine revs.

Engine and gearbox
Here’s where the differences are the biggest: the Verna brings the greatest firepower to the table with its VGT-equipped 1582cc, 126 bhp engine. Maximum torque is 26.5 kgm but the turbo lag might frustrate you. Keep it on the boil, though, and you’ll find revving it to the redline to be almost as exciting as a petrol — the engine zings to the redline in the first few gears. The gearbox feels light and positive and throws are short, but it takes the most effort to slot into gear of the three.

The Honda has a mere 98 bhp and 20.4 kgm from its 1498cc engine, but its torque spread is far more progressive than the Verna even though it has a fixed geometry turbo. Surprisingly for a Honda, it doesn’t really enjoyed being revved to the redline — the focus here is efficiency, not fun. Like the Hyundai, though, you get six speeds to play with. Shifts are short, light and positive but not as good as the Skoda’s. Also, for those of you who are stunt drivers, I’m not sure you can pull off a 180- or 360-degree running turn with the way reverse gear is engaged.

The Rapid’s reason for a facelift is its engine — gone is the 1.6-litre engine, and in its place is the new 1498cc diesel that helps bring it under the excise benefits. It generates 105 bhp and 25.5 kgm of torque, which places it middle of the road yet again. However, it builds steam early and quick, and rushes to the far-off power peak, the highest in the lot here at 4400 rpm. Shifts are light, positive and intuitive, and combined with the eager engine, make for a fun drive. What isn’t fun is the engine’s obvious bias for fuel efficiency —the 5-speed manual means that Skoda had to get a respectable fuel efficiency figure somehow, and as a result, performance suffers.

Ride and handling
Frankly, if it is great handling you’re after, go buy a Fiesta. All three sedans here have sacrificed dynamic ability at the altar of ride comfort. Let’s start with third place — the Verna. Hyundai has stiffened the suspension for the 2014 model year, and it now is on the same page as that eager engine, but they’re still not speaking the same language. The suspension is still not stiff enough for the speeds that the driveline can manage, and it still is unpredictable on the limit.

Honda claims it has seen the error of its ways and that loaded Citys won’t scrape their bellies over speed breakers, but in the process the City has lost its predictable handling. It is now soft all around, with uninspiring steering feel. It isn’t a fun car anymore, sadly.

The Rapid isn’t a perfectly set up car by any means, but in the present company it is the best for the enthusiast. Better steering feel and rear rebound would be nice, but that is nitpicking in a group where the focus isn’t the driver’s seat.

All three cars offer ABS and EBD, but the Verna is the only one that has rear disc brakes. These top-spec versions offer two airbags, one each for the driver and passenger, but the Verna offers a staggering six of them.

The Rapid has tried to play the value card, and for over Rs 1 lakh less than the other two, it has played a very good hand. However, Skoda’s service reputation precedes it, and the lack of features will be disappointing to a prospective owner. For a ten percent higher ex-showroom price, both the other cars here are accessible.

Which brings us to the Verna. It costs less than the City, has a bunch of features more like LED parking lamps, projector headlamps, rear disc brakes and four more airbags. It is also more refined than the City by a country mile. Where the City scores is in looks, fuel efficiency and cabin space. Honda has also smartly given it a colour display for the head unit, and that capacitive touchscreen for the climate control. For all the racket the diesel makes, the Backseat Babu is going to be very happy with his Honda, and that’s why we have to agree with the sales numbers — the Honda remains king.