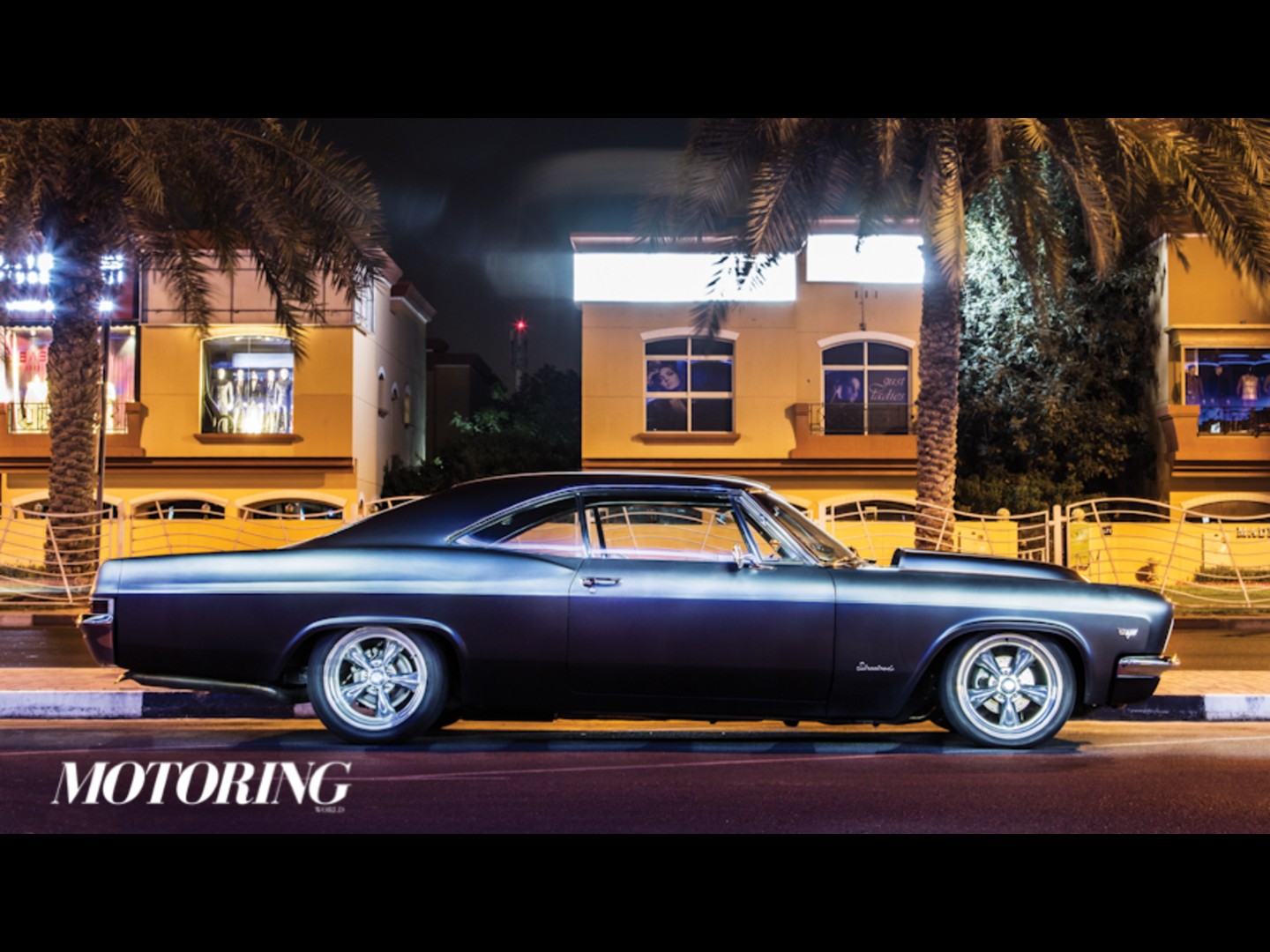 It’s well past midnight. The streets are silent and there is a nip in the air, typical of the onset of winter. The café we’ve pulled up next to turns its neon signage off a bit hurriedly. We’re not welcome. The muffled roar of an SLS AMG’s V8 cuts through the crisp sea breeze, leading on a pair of blinding blue lights from a Dubai Police 5 Series patrol car in its wake. It’s not too unusual a sight, we figure, as a Corvette tears down the opposite lane. Meanwhile, we’re safe in the shadows. Out of sight, out of trouble.

Well, not really out of trouble, if I can be completely honest with you. Only a few moments ago, we’d pulled a massive burnout at a traffic light before slithering across a roundabout, making a racket loud enough to wake up the indulgently pampered residents of the Burj Al Arab hotel. It was all over within a minute, but the guilt lingered around for much, much longer. It’s also not very easy to be discreet with a car as large as this — the 1966 Chevrolet Impala SS. It’s a resto-mod example of one of Chevy’s most iconic cars ever built, which means it retains all the goodness of the original, but with the slight exception of running a few modern bits. And the small matter of a 750-horsepower engine.

This is a car that’s unusual even in Dubai, a city obsessed with V8s. Indeed, if you look up their used car listings, it’s not uncommon to find ‘Porsche 911 Carrera S, V8 (sic)’, all in the hope of better resale value. Almost everyone drives some sort of V8-engined monstrosity and, quite frankly, you do get bored of craning your neck out every time a Mustang passes by (except Kartik, our shutterbug, who tried everything short of leaping out of a moving car to spot one). You’d imagine, thus, that the Impala would barely turn heads, but that’s just not true. Despite its dark, matte paint job and 50-year vintage, it brings everything to standstill. Explains why we’re lurking in the shadows.

From a distance, our photography equipment resembles a set of freshly forged assault rifles and the Impala, with its brushed grille and lowrider stance, is only adding to the visual violence. The power bulge on its long, table-top hood is a reminder of the menace we’d just been moments ago and the pillar-less windows are a signature touch, conforming to the popularity that once came with being an outlaw. While Dubai is certainly the least ideal place in the world to be an outlaw (or what do I know?), it sure is worth the 60 seconds of fame pretending to be one. So what if I’m wearing Fila driving shoes and look more like a dedicated motoring  journalist (Yeah, right – Ed) than a  certifiable hustler?

Ammo, I mean, camera kit stowed away, it’s time to get behind the wheel. I make the rookie mistake of striding up to the wrong side of the car (this is left-hand-drive country, remember) and then the nervousness sets in. Remember, this car is so huge, each end is in different time zones and it produces a shade over 800 bhp. But I have a job to complete and a man’s gotta do what… you get it, right? I carefully slide in, sitting low and smug in the soft leather seat and it’s a different world in here altogether. Gripping the thin-rimmed 2×3-spoke custom steering wheel in one hand, I turn the ignition key and, after a frightening shake that could be measured on the Richter scale, it fires up. Behind the wheel, an all-digital speedo cluster lights up, well in contrast with the brushed-metal dashboard trim. ‘I must be the most inappropriate person to have ever driven this car,’ I think to myself.

But I haven’t really driven it yet, of course. The 3-speed automatic gearbox is built for drag racing and is, for some reason, unmarked. This means every time I try and slot it into ‘drive’ I go into ‘reverse’ instead, and this is obviously scary when you have a G63 AMG parked on your tail and your rear bumper is about as far away from you as your past life. With some help and fervent prayers, I thankfully do get a hold of the right gear. My first impression is that the steering is broken. If you thought the steering on a Nissan Micra was godawfully light, wait till you experience the one on the Impala. It’s so light, it can turn around from lock-to-lock if you so much as breathe in its direction. Not a very reassuring thought in a car this powerful, obviously.

Somehow, I pull off the kerb and onto the road without knocking anything down, wondering why our photographer was making werewolf-like noises as I drove past him. Never mind that. At low revs, the 6.0-litre, supercharged LS2 fuel-injected V8 only just about emits a deep rumble, but you never expect it to do more than that. The throttle feels a bit sticky and it’s a far cry from the electric responses of the GT-R I was driving the morning before — also owned by the same enthusiastic chap, I must add. That said, it moves with character. The suspension is like a trampoline and when you corner, well, you just don’t. Body roll takes a literal meaning with the Impala and with a steering so light, hooking 90-degree turns is spookier than watching Paranormal Activity in the middle of a graveyard on a  moonless night.

That’s not what this car is meant for, however. This one’s a hot-rod, a drag racer that’s meant to be floored in a straight line and the time to do just that, as it turns out, has come. The distant nose pointed towards a straight stretch of well-lit tarmac and both hands firmly on the wheel, I floor the throttle into the mushy carpet. Nothing could have prepared me for this. This cool, lazy American muscle car suddenly transforms into a fire-breathing hooligan and just past the 4000 rpm mark, we’re going very fast in down the straight, but sideways. It’s as if someone poured grease all over the 18-inch, 255/45 rear tyres. It’s over in a split second, but now I’m too tempted to try again. So be it.

It makes one hell of a racket and that V8 feels like it’s about to explode under that long snout. You can feel every bit of how manically quick this car is, but inside you’re seated in the dead centre of the 1960s. It’s like being stuck in a time-travel machine, unsure of which side you’re going to be spat out on. The entire car just squats lower than it already does at idle and the force with which it accelerates is so aggressive, you can barely believe it is happening at all. It goes down the ‘box without you really noticing it and before you know it, you’ve raked up half a dozen speeding tickets. We turn around having driven a fair distance and on the tarmac on the other side is rubber-darkie evidence of what I’d just been up to. ‘Did I really do that? Ooh, and that one, too?’

This Impala is an absolute guilty pleasure, a sinful retreat into a bygone era. It’s morally wrong, just like the people who drove it, but in a world that’s being uncontrollably sanitised, it’s rebellious in just the right way. What five decades couldn’t do to it, five more certainly won’t be able to — bring it to an end, that is. The Impala is a symbol of America as it once used to be and this one, in particular, is a fitting tribute to the magic of internal combustion. I’m going to say it this once — they just don’t make ’em like they used to. Time for some doughnuts now, if you know what I mean…