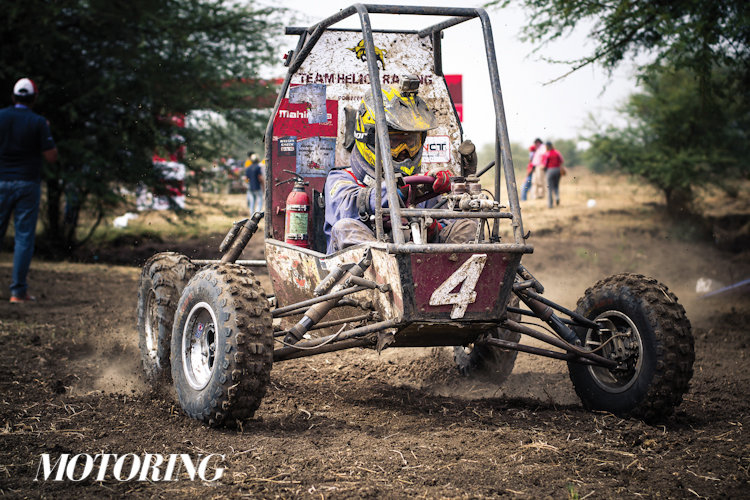 Team Helios Racing’s buggy came over the crest and it landed a bit hard, causing the front right wheel to bend inwards in an awkward angle. The driver desperately tugged at the steering trying to make it go around the next turn, but it just ploughed straight on. Immediately, the volunteers in this section of the track came running to him and helped him move off the track. I expected the driver to just hang up his boots; he stepped off the buggy and asked the volunteers to prop the buggy up on one side. Recognising the issue (a screw connecting the lower A-arm to the wheel hub had sheared off), he got to work and fixed the problem. Soon, he was on his way, joining the rest of the Baja buggies on the track. This incident really captures what Baja SAE (Society of Automotive Engineers) India is all about and also what they are trying to achieve. These small dune buggies are not technology demonstrators, nor are they about spurring innovation. It’s all about giving students an opportunity to put some elbow grease and honing their engineering skills.

The ninth edition of the Mahindra Baja SAE India took place at the NATRiP facility at Pithampur with a course laid out for final endurance round for which 120 teams had qualified. To recap things a bit, all teams share the same engine, a 305cc single-cylinder motor putting out 10 bhp supplied by Briggs & Stratton. However, they are free to use any transmissions (including continuously variable transmissions) they like as long as they don’t exceed 60 kph in top gear. The specifications of the rest of the components like brakes, chassis, frame, roll cage, suspension, electrical systems and steering systems are broadly laid out which needed to be adhered too, but the interpretation can differ from team to team.

If the 10-bhp engines sound underwhelming, the course laid out for them was anything but. A five-kilometre-long dusty gravel course had everything from steep hill climbs to muddy trenches, and ‘S’ curves to suspension-destroying troughs and crests. The hill climb was a source of particular bother, with many buggies getting stuck halfway up because of the lack of momentum and wheels losing traction. The organisers then had to break out the Polaris Ranger 6×6 to pull those poor souls to the top. The Rangers saw a lot of action that day. The average lap time for the day was around the 10-minute mark, with average speeds hovering between 25-30 kph. In the end, four hours and countless laps later, Pune’s College of Engineering won the title, with Alard College of Engineering, Pune coming second and SRM University, Chennai taking the last spot on the podium.

There was an EBAJA championship, too, where instead of internal combustion engines, teams had to use batteries and electric motors. However, EBAJA had a disappointing turn out this year, with just four teams making it to the final endurance round. While having a chat with the EBAJA teams, Pawan Goenka, executive director of Mahindra & Mahindra, gleaned that the reason for the lack of enthusiasm for EBAJA was because of the greater costs involved. While the total costs to compete in the regular BAJA with the Briggs and Stratton engine came to around  Rs 4 lakh, an EBAJA team will set you back by almost  Rs 8 lakh. Mr Goenka promised that from next year, he will start an internal Mahindra fund to subsidise some of the EBAJA costs.

With the rise in interest in manufacturing within India, there is a constant demand for talented, quick thinking and experienced engineers. And this is where Mahindra Baja SAE India wants to make the difference. Over the nine editions, the hundreds of teams and thousands of students who have participated, all constitute an invaluable talent pool and are often hired by Mahindra or by sponsor companies themselves. Many also continue to contribute to the SAE India. In conclusion, while the Mahindra Baja race was undoubtedly exciting to watch, how about letting us have a go next time, Mahindra?