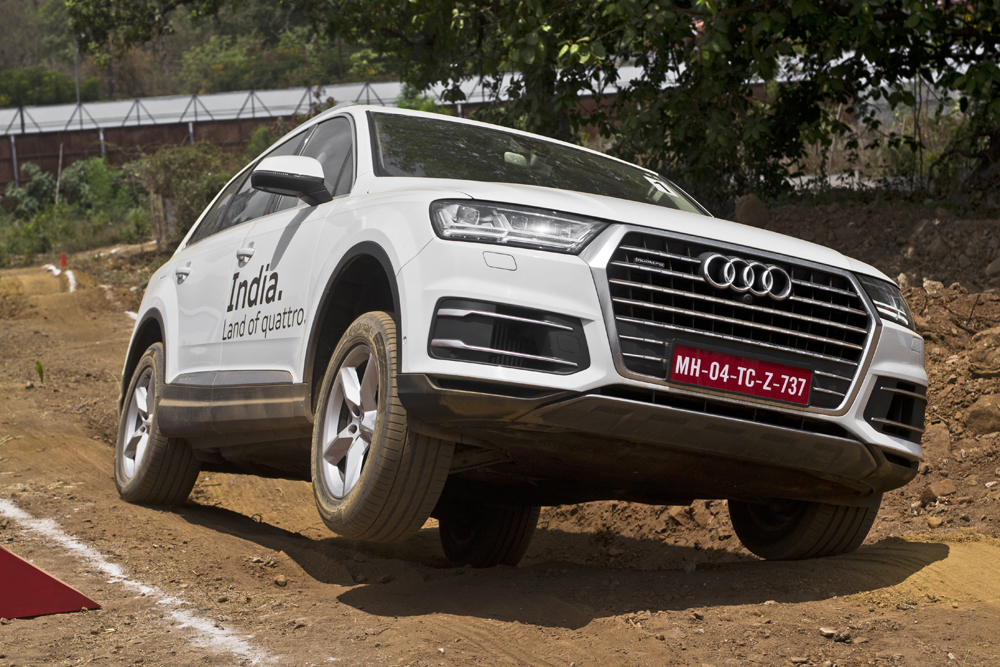 Audi’s long held series of off-road driving exercises – the Q Drive – is back, and they kick off the 2016 season with the first event which was held in Thane. This was the first of the 30 drives that they have planned this year, to be held across different cities in India, supported by the local Audi dealer. Audi had pioneered this concept of creating tailor-made courses which demonstrate the capabilities of their four wheel drive system, called the quattro, in India. And with their model range getting newer versions of the quattro system (in its sixth generation now) with greater capabilities, the Q Drive is a good platform to experience the latest the engineers at Audi’s Quattro division has come up with. Audi also uses the Q Drive to educate their current and prospective customers about the quattro system and how and when to use it.

For this event Audi had lined up the Q3, Q5 and the new Q7 for the drive. Other than the Q3, the Q5 and Q7 get quattro as standard, with the Q3 also available in a front wheel drive version with the manual gearbox. For the Q Drive though, we got the quattro all wheel drive version. The course is designed in such a way that it highlights not only the way in which power is sent to the four wheels but also other aspects like the damping in the different suspension modes, the ground clearance, articulation, approach and departure angles, the hill descent control, noise and vibration etc. So there is a rumble strip that clearly shows the superiority of an adaptive air suspension, alternate pits, a steep bank and the reverse bank, and a hill.

One needs to also remember all Quattro systems are not the same. For tranverse engine layouts, like the one in the Q3, they come with Haldex systems, while longitudinal engine layouts have Torsen or Crown Gear differential systems. The main difference between the two is, the Haldex system uses a electronic inputs to create hydraulic pressure, which engages a clutch to send power to the rear differential. While the Torsen or Crown Gear based systems use a central differential which can sense if one of the wheels has lost traction, and then it then splits torque between the front and rear differential, capable of sending almost 85 percent to the rear and 70 percent to the front. While Haldex based systems are capable enough, the torque vectoring Crown Gear based system were just a little bit faster to react when one of the wheels had lost traction.

It would be quite an injustice if a mention isn’t made of Aditya Patel, our mentor for the course and one among India’s best motorsport talents. Aditya was the one who guided us through the course and instructing how to get out of sticky situations.

At the end of the day all the cars were more than capable enough enough to handle what was thrown at them at the course. Although modern day luxury SUVs are seldom used to drive along a thirty degree dirt bank, if they were, any of the quattro equipped SUV’s would surely be up for the challenge.