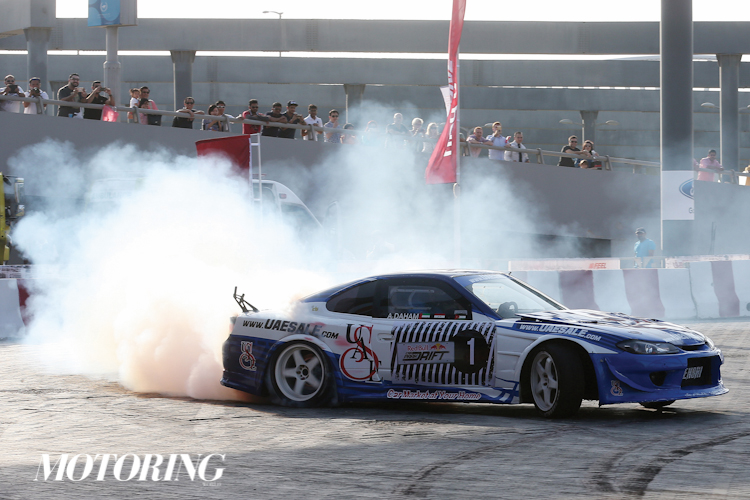 Dubai doesn’t really need a motor festival. In a city that’s so crammed with the most exotic cars and where a litre of petrol is cheaper than an equivalent volume of water, every commute is a motor festival in its own way.You could toss a coin in the air, sure of the fact that it will land on the roof of some sort of very fast, very powerful car. A V12 Mercedes? Common. A Ford Mustang? Yawn! A Ferrari? Yeah, my neighbour’s got two. Then again, this is Dubai, and this lot sure knows a thing or two about  one-upmanship.

So, in a turn of very unexpected events and a phone call with the sweet chaps at Dubai Tourism’s Indian office later, I found myself strapped into a Boeing 777 and flown into a very agreeable part of the world I very briefly called home. The Dubai Motor Festival, I learned, was like an after party to the Dubai International Motor Show which meant it was to be more of an engaging, involving series of events rather than merely a showcase. This seemed like a good idea to me, especially since I thought I heard someone say ‘Ken Block’ over that well-timed phone call.

What didn’t seem like a good idea at all, however, was the prospect of being strapped into the passenger seat of a Ford Mustang-based supercharged drift car, to be ‘shown around’ by one of the UAE’s drifting champions. It was an offer I couldn’t refuse, though. I wish I had, because I embarrassed myself by the bucketload as I struggled to make my way into the car, what with that roll cage and a ridiculously small racing seat. And that was the easy bit. Having introduced myself to the person I had entrusted my life to, Muath Al Essa, he tossed me a lid, asked me to hold on tight and fired up what, at the time, felt like a nuclear power station.

A 5.0-litre V8 produces quite an admirable sound, as I’m sure you’ll agree, but a supercharged, unrestricted one that produces in excess of 750 bhp? It’s so loud, it’s in violation of human rights — I’m serious. Before I can say this, however, we’ve pretty much cannonballed out of the garage and into the parking lot where I realise, perhaps a bit too late, that Al Essa can’t drive — in a straight line, that is. We’re going properly sideways, extremely fast and precariously close to pillars, cones and spectators. The tyres produce so much smoke, Greenpeace would deem it apt for us to be nuked. Thankfully, I’m not afraid by any of this as I’m too occupied attending to the pain from my freshly shattered eardrums. That I walked away from it is proof of why Al Essa is so popular on YouTube.

The next morning feels much tamer in comparison, as I stroll past an amazing assortment of raid-ready Jeeps and towards the Aston Martin stand, to check out their new Vulcan and a one-off car apparently used in the latest James Bond flick. This soon changes as my phone beeps with a text message asking me to join in for breakfast — with Ken Block! I run to the best of my ability, ignoring an impeccable Ferrari 355 and Lamborghini Diablo parked in the sun, only to find myself seated across the table, moments later, from one of the world’s most legendary gymkhana drivers.

He’s impossibly calm, even as he fields questions from motoring scribes from around the world while posing for ‘selfies’ and signing autographs at the same time. I guess that explains the ease with which he drives the way he does.
I run into even better luck later on in the day, as I walk into a chance encounter with a man who has been a childhood hero of sorts — rally legend Mohammed Bin Sulayem. With enthusiasm and clarity typical of the Arabs, he tells me all about his love for cars, rallying, rolling over, Jeremy Clarkson and, of course, his very impressive private collection. So engrossed is he in his unmistakeable passion for motoring that he even delays the impending supercar parade, just so we can wrap up our conversation with perfection. The lump in my throat is bigger than the nose cone on an Airbus A380, at this point.

Bin Sulayem does flag off the aforementioned parade, of course, and to say it was a ‘treat’ would be a huge understatement. Well, if you spot a Diablo, a Veyron, a LaFerrari, a P1, an AC Cobra and a G63 6×6, all within a minute, you’d think so too, right? Even this wasn’t the end of the festivities (because Dubai, that’s why!) since next up was simply the most fantastic automotive performance of the entire event — Ken Block doing a gymkhana run in his menacing Mustang-based drift car, the Hoonigan. Thankfully, this was less painful to watch since my eardrums had already shattered from the morning before.

While a lot more happened (a classic car show won by a Cadillac Coupe deVille, a Red Bull drift challenge and even a desert safari for a lucky few), it all began to make sense. Dubai doesn’t need a motor festival, it just chooses to have one because, like everything else, it can. The Dubai Motor Festival is just another reason for the people of this glitzy emirate to celebrate their passion for everything automotive and if the 2015 edition was anything to go by, I’m certainly going back next year. Come along next time, okay?