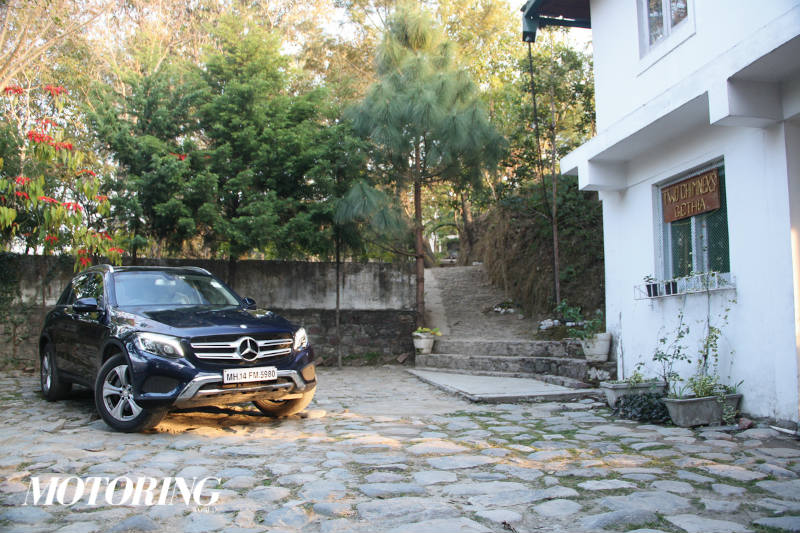 Evolution is inevitable, yet it is not always in your face. Well, in hindsight it always appears so but very few can spot it in action. SUVs have been around for years now but not everyone imagined that a big, bulky vehicle will become so important or even come in different sizes such as compact, mid-size, full-size, and so on and so forth. The people who did, like the smart people at Mercedes-Benz, are reaping the benefits and courtesy them, so are the buyers. The GLC is one such benefit — an SUV with car-like comfort and driving dynamics, and the presence and practicality of an SUV.

Just like the SUVs in the automotive space, homestays have been that part of evolution in the travel industry which missed many. Not the Tejpals, though, who now successfully own and manage three wonderful properties. Two Chimneys at Gethia, where I drove to recently, was bought for personal use in 1999 like most homestays in India. Soon, it was a popular weekend getaway amongst their friends, and their friends’ friends and it didn’t take them long to realise what was happening here. A website was up shortly and Two Chimneys was in business.

Like most houses in the hills, Two Chimneys has its fair share of stories. Urban legends for some guests, absolute truth for the locals and fun stories for people like us. The main house is over 100 years old and was the pride of a proud English lady, Madam Durell. Wife of a British Army officer, Madam Durell was the real deal. She wore breeches, rode horses and was never seen in public without her double-barelled gun. She was enchanted with Gethia and voila, an entire hill side was hers. Naturally, she chose the best spot to build her house. Madam Durell was so much in love with the house, she apparently refused to leave it much after she left this world. Rumour has it that until a plaque bearing her name was not put up in the house, the renovation of the house could not be completed. Other stories are not as exciting, like Mahatma Gandhi’s stop for a tea or Jim Corbett visiting regularly, though they may impress some.

Two Chimneys is about 25 minutes from Nainital, but the solitude would make you believe it is a galaxy away. There are 11 rooms, all very tastefully done and very welcoming. Apart from interesting names such as First Things, Goat Shed, The Nest, and Grotto, they all offer lovely views of the valley. No snowy peaks here, but I am not complaining. There is a new wing, too, which is more modern but only in construction. The warmth and charm of the old house are not missing at all.

The drive to Gethia can be a tiring one, if you leave late from Gurgaon like I did. By late, I mean 6.30 am. Since I drove the GLC in Coorg last year, the petrol one has been my pick and I was finally on my way, in one, to the hills. Well, almost on my way till I hit Ghaziabad. An hour and a lot of under-the-breath muttering later, I was literally on my way.

With the car in Comfort mode, the plains were a breeze. Triple digit speeds were effortless and the steering felt nice and responsive. The seats are comfortable and the Ghaziabad traffic was long forgotten. The soft suspension is perfect for long drives, especially highways where you just want to zoom. The hills were not far away, though, and I was itching to select Sport+. Yup, the mode which takes everything a couple of notches higher. The exhaust note can be heard, every gear change can be felt and you can feel the stiffer springs. It’s like turning your La-Z Boy into a dining chair. Not literally, of course, but you get the drift, right? The change is noticeable and impressive, as I start climbing towards Nainital. The 4Matic and the 18-inch wheels offer commendable grip and give you a lot of confidence. At higher speeds, there is a hint of body roll but you forget that when you realise this is actually an SUV and not the C-Class. Apart from that, the GLC is a hoot to drive. Nothing about the car ever lets you down; it is comfortable on the highways and spirited in the hills. Just remember to choose the right mode.

Much like Two Chimneys, I would say. Nothing at the 3-acre property is a disappointment — the staff is courteous and helpful, the views are beautiful, the food is delicious, there is a library, a pool and two really cute dogs. The staff told me that there are enough and more things to do/see around Gethia. Kind of engaging the Sport+ mode for guests, who don’t like sitting at one place and seeing what’s around. I had chosen my mode already, though. Sport+ to get to Gethia and only Comfort after that. Clearly, I have not evolved much and that is more than obvious.