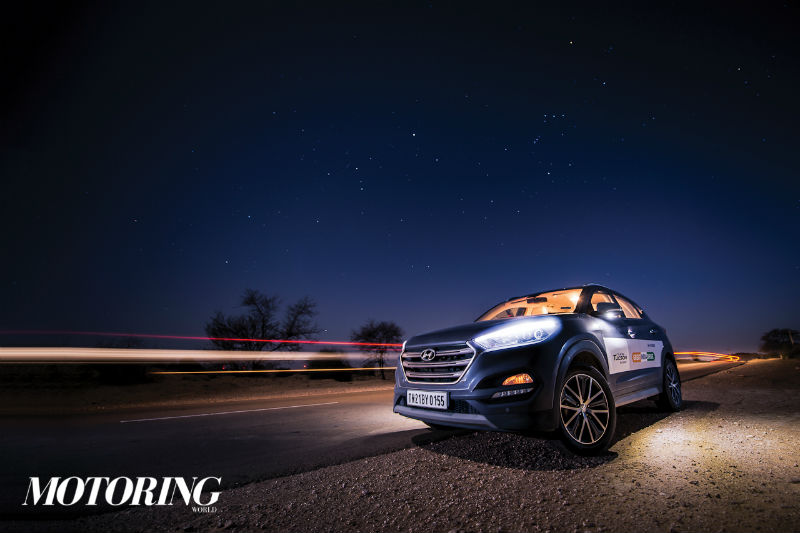 The sight of snow evokes a certain childlike innocence. The intimidatingly beautiful desert terrain brings out the somber side, whereas the sea breeze has its own unique way of putting the mind at ease.  Driving across three contrasting terrains on one road trip seemed like an exciting but daunting prospect. However, when you have an impressive and solid car like the Hyundai Tucson for company, the story of the journey is certainly worth recounting. Over the course of 12 days, we drove more than 3,300 kilometres across six states, two Union Territories, and came across the beauty and might of the Himalayas, the dry and scorched terrain of the Thar Desert and some lovely beaches along the Arabian Sea.

The diversity of India is truly astonishing and you come across striking vistas driving across the countryside. Meander a few hundred kilometres and things change dramatically — people, dialects, cuisine, culture, and even the traffic sense! We started off from the tranquil abode of the Dalai Lama in Dharamshala but being the onset of summer it was a challenge to find snow. We decided to take the Tucson up to Manali in the hope of finding some. On the map, Himachal Pradesh doesn’t appear to occupy too much space; in reality it’s a big state to drive across.

Driving from Dharamshala to Manali, you cross the lovely Kangra Valley – where tea estates are lined along the road and people offer you a taste of ‘Kangra tea’. Temporary kiosks are set up on the roads and eager signboards ask you to stop for a cuppa. The tea is delightful but we can’t stop for long as the Tucson is just getting warmed up.

The Tucson is an impressive-looking car from the outside but it really turns on the style once you’re behind the wheel. There are certain bad patches that you come across while driving to Manali but the sturdy suspension of the Tucson seamlessly glides over them. You feel extremely comfortable driving through the curvy and winding roads, of which there are plenty as you get closer to Manali.

It was late evening when we reached Manali and were told that finding snow will be difficult at this time of the year. A few enquiries later we were told that if we drive towards Keylong we would certainly find some. We headed towards Keylong the next morning but halfway through our drive we were told to get necessary permissions from the authorities. Hurriedly, we came back to Manali and were told under no circumstances that we could drive towards Keylong as it was not a safe route. For a crushing moment, it felt like the idea of exploring snow, sand and sea on one trip was nipped in the bud before it actually germinated. A kind and gentle government official, however, directed us towards Hamta pass – about 40 kilometres ahead of Manali.

The next morning with the Tucson shining in all its glory under the Himalayan sun we trotted towards Hamta. The terrain started to get treacherous as we continued our journey uphill. Clear skies soon gave way to grey and overcast conditions and as we inched closer to Hamta there was a heavy downpour. The rain didn’t dampen our spirits as we started to spot patches of snow. One rare and wide turn later we were surrounded by snow all around us with a lovely waterfall giving it company. The allurement of any journey is unexpected situations and intangible experiences – it’s not about the destination as such and more so about getting there.

In getting to snow, the Tucson was an able accomplice. It makes 183 bhp at 4000 rpm and 40.7 kgm – it hits the three-figure mark pretty quickly. The ride quality in the hilly terrain is top notch as is the handling of the car. The cabin is spacious and the grey and beige two-tone dashboard gives a plush look. The Tucson comes with an electronic handbrake and our automatic variant had a ‘hill hold’ assist button as well. The large touchscreen and infotainment system is a breeze to use and comes with both Android Auto and Apple CarPlay.

Leaving the Himalayas and snow behind we headed towards the second leg of our journey – to take the Tucson into the formidable Thar Desert. From Himachal Pradesh we cut across Punjab and rather than taking the national highway route, we chose to drive through the back roads of Punjab. Driving in Punjab is real fun as you get to eat scrumptious food at almost every dhaba. And what’s a road trip without getting to eat some delectable high-on-calories food?  The state highways in Punjab are impressive even though the temperature was hitting 40 degree Celsius.

After halting a night in Hanumangarh in Rajasthan – about 70 km from the Punjab border – we continued our quest to reach the desert. A handy tip for driving in Rajasthan: never drive with your windows rolled down because there’s dust on the roads and then there’s the dust of Rajasthan!

We encountered several dust storms as we continued to drive towards Jaisalmer via the city of Bikaner. You won’t find good places to eat, as it’s a state big on area  but sparse on population – at least along  the highways.

It was a long drive – about 600 km – in the dusty terrain of Rajasthan but the wide roads were a welcome change and that’s where the Tucson showed its true might. As you apply the throttle, the Tucson’s engine responds brilliantly at high speed as well. Perhaps it was a coincidence that the song ‘A Horse with No Name’ by the band America was playing when we were edging towards Jaisalmer. The words were apt: ‘On the first part of the journey I was looking at all the life. There were plants and birds and rocks and things. There was sand and hills and rings… And the sky with no clouds. The heat was hot and the ground was dry. But the air was full of sound.’

Luckily, we weren’t on a horse with no name but the heat was hot and the ground was really dry. The desert can be really intimidating and even as you drive towards it there is a sense of being in a no-man’s land. Since we went in the off-season, there weren’t buses full of tourists to ruin the fun. Camels trod across roads routinely, windmills scattered along the highway look extremely formidable and you wonder how after covering just over 1000 kms you’ve transcended terrain.

Twenty-four hours earlier we were shivering, staring at snow in the Himalayas and here we were squinting our eyes and feeling the wrath of the sun in the Thar. From snow to sand – about 20 hours of driving time in the Tucson that we were getting really comfortable with. We gorged on the butter and ghee-laden paranthas in Punjab, sipped on the delightful Kangra tea in Himachal and feasted on traditional Rajasthani food in Jaisalmer.

This, however, isn’t where it ends. Catch the next part of our journey in the June issue of Motoring World.

(This report was published in the May 2017 issue)