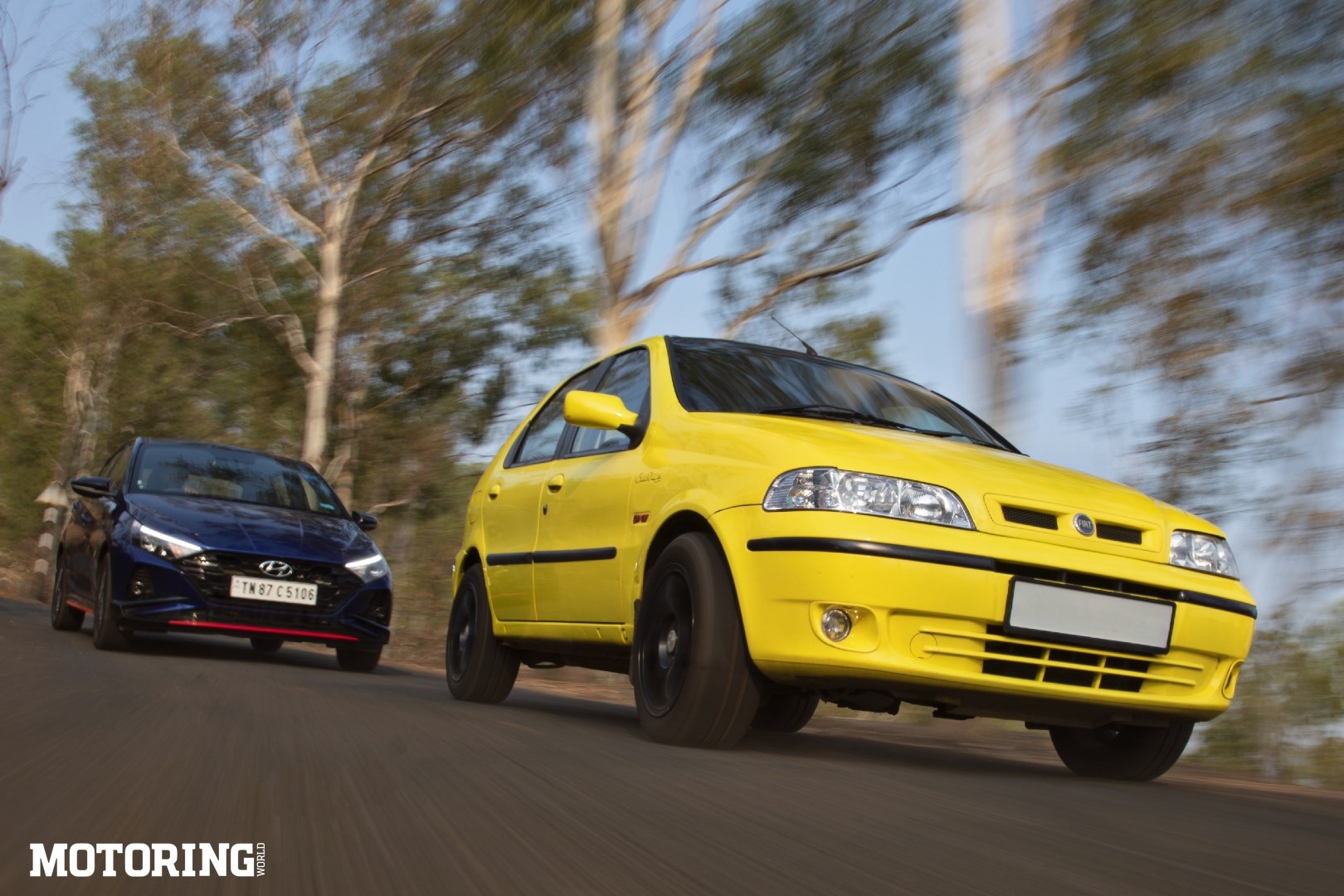 Nostalgia can blur the past, painting hardship and strife in a new light. Flaws become endearing character traits, and the good times shine through brightly. Even 20 years after it arrived in India, the Fiat Palio 1.6 — particularly the S10, which was limited to 500 units — is still a highly regarded hot hatch for the masses, but how true is that? For its time, it had on equal, and despite the heavily publicised reliability issues, there are buyers on the used car market looking for a well-preserved version. In a bid to find out if the venerable Palio S10 is entertaining even in light of its modern competition, I’ve brought the current default choice for budding boy racers, the Hyundai i20 N Line. 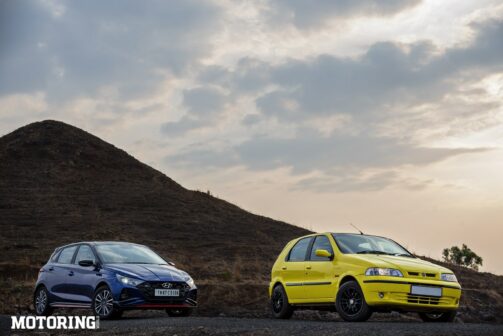 In hindsight, it was somewhat of a masterstroke and a mistake that Fiat chose to offer a performance version of its small car as it did kick-start the segment, but it was too soon for the budding Indian market. ‘Kitna deti hai’ was the ruling mantra, and the Italian brand’s lack of after-sales service didn’t help either. Twenty years on, and with the end of production of the Volkswagen Polo TSI (the goodbye was fun, yet a little sorrowful), it’s only Hyundai that offers a fun-to-drive hatchback on a relative budget.

Seeing as I had owned the Palio 1.6 GTX back in 2011-2013— and committed blasphemy by installing a CNG kit — I was almost certain I had an unjustly favourable opinion of the car. So much so that I was convinced it could be a match for a more modern machine. The nostalgia blanketed me as I stepped in. That chunky steering, those white dials, the aluminium pedals, and those well-contoured seats — all of it brings back fond memories of road trips with friends, weekend escapes with the family, and fun on the ghats.

And then all the flaws came flooding back. The driving position involved a compromise where either your arms were stretched out, or your knees were too bent. The stylish-for-its-time dash has aged poorly, and the ergonomics are still off. But none of that matters as you turn the ignition and start up the 1.6-litre engine. Even today, there’s a race-ready vibe from the engine — not intrusive, but more eager. The gearbox, again, for its time was pretty smooth, and the clutch light, but in the modern context, you can see the level of refinement 20 years of development brings.

What remains untouched by time or memories is the fact that the Palio’s front wheels chirp when accelerating hard, even in the second gear! This four-cylinder naturally aspirated unit making 99 bhp and 13.97 kgm of torque is still a rev-happy, beautiful-sounding piece of machinery, but it is happiest in the middle of its rev range. Use the slightly notchy gearbox to keep the engine on the boil, and it’ll reward you by plastering a smile on your face. Remember to use it in the same way for corners, cause that’s where the fun is.

Speaking of corners, the taut body (even for a 20-year-old car) and the supremely balanced suspension make blasting into and out of a set of twisties so enjoyable that I just didn’t want to stop. Tackling mid-corner bumps is no hassle either. The excellent hydraulic steering has its role to play as well, because it always lets you know exactly where you’re headed, and what the ground feels like under you. Not that there’s a vibration coming off the steering, but the amount of feedback is something you simply don’t get in cars any more, which is a shame.

The Palio is just so much fun, in every sense of the word, that it feels almost blasphemous to say a word against it. But there are some things that need to be said. Speaking to the owner, Kiran Kadaba, reminded me of how much money I spent to keep the Palio fighting fit. In my rather short ownership stint — just under two years — my 1.6 GTX had consumed over a lakh and a half of my hard-earned salary. But that’s nothing compared to what Kiran has gone through. ‘I’ve spent just about Rs 5 lakh getting it back into running condition, and 95 per cent of the parts are original,’ he said, with a sort of shy pride. 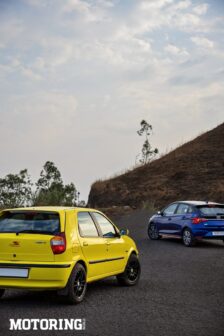 And then there’s the abysmal fuel economy — a 100-km drive to the shoot location and back had drained nearly half the Palio S10’s 47-litre tank — which was why I had installed the CNG kit in my 1.6 model back in the day. It doesn’t excuse my despoiling an icon, but it was logical, and I have no regrets. There’s also the overheating issues, the consumption of oil, and 20 years later, the sourcing of spare parts. I mean none of this is cheap, and it will take a serious bit of financial backing to maintain one. On the other hand, buying a Palio 1.6 or an S10 isn’t all that out of reach — good options can be found for about Rs 1 lakh on the used car market. 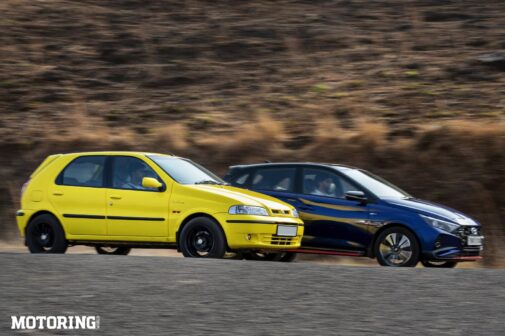 The Hyundai i20 N line sure does have a lot to live up to, but then it’s got a lot of things sorted right off the bat. Unlike the Fiat, the Hyundai is reliable, not nearly as expensive to maintain (even in the Palio’s heyday), and there’s the brand’s robust after-sales service in case something does go wrong. After all, the base car for the N Line is that well-selling and dependable i20 turbo-petrol. You get all the modern amenities — from the in-car connectivity tech and massive infotainment screen, to the eight-speaker Bose sound system to cruise control.

What you also get is a spacious, well-put-together interior, and finding the right driving position for you is also a cinch. In terms of outright speed, the i20 N LIne, with its 118-bhp 1.0-litre turbo-petrol engine that makes 17.54 kgm of torque, has the advantage. It does feel quicker off the line, and does accelerate harder in gear, but (like I’ve said before) Hyundai doesn’t have its dual-clutch tech quite right yet. Instead of bringing a dose of sportiness to the package, it feels like the gearbox saps the engine of its power.

Anyone who has driven the Venue turbo with the manual gearbox, or the Nios and Aura turbo-petrols will know just how much this engine is capable of, and it’s disappointing that the purportedly performance version of the i20 doesn’t get that option. It would even bring the price down, thereby drawing in more potential buyers. The saving grace is the way the i20 N Line handles. The i20’s chassis has always been stiff, and with the stiffer suspension setup and the revised geometry for the steering, it finally gets its chance to shine.

Long flowing corners are the i20 N Line’s forte, and this is where it feels most adept. Tighter sections, particularly uphill ones, would have felt more rewarding, if not for the gearbox. You barely need to use the feelsome and strong brakes on an upslope. However, hit a set of downhill twisties, and the Hyundai is nearly as proficient as the Palio in delivering the fun factor. You don’t get the same amount of feel from the steering, but you always know in which direction the wheels are headed, which is confidence-inspiring in the bends.

A word needs to be said about the N Line’s much-touted exhaust, which is a bit of a toot from idle to about 2500 rpm. After that, it sounds like any other car from the Hyundai stables with the 1.0-litre turbo-petrol engine. Not that the three-cylinder thrum isn’t pleasing at higher revs, it’s just disappointing that the gruffer, more exciting tones don’t continue till the redline. Still, there’s so much that the i20 N Line gets right, and that’s because the Hyundai i20, at its base, is a decent car.

And that’s quite unlike the Palio. Even in its base form, the flaws are apparent and there’s nothing that can change that. The Palio 1.6 GTX, and the special S10 version that was adorned with Sachin Tendulkar’s signature, weren’t logical choices, but the one you made with your heart. It was meant to thrill, not be a basic point A to point B machine. Meanwhile, the i20 N line does everything you’d need a point A to B machine to do, and then adds a modest dose of excitement to the package. 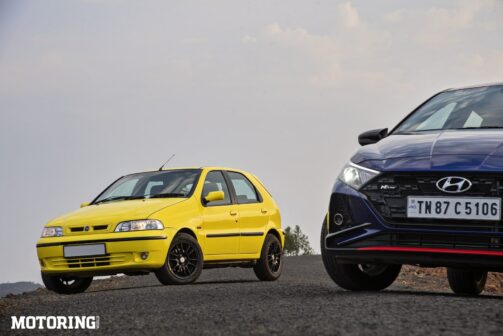 For now, I guess boy racers will have to make do with the sportier i20, and they won’t be complaining about anything other than the relative lack of performance. But to answer the question of whether the i20 N Line can take over for the Palio S10, well, I think not all the way. Yes, the Hyundai is a fun, sporty thing, but the Fiat had more character to it, and that’s what made the difference. The Palio was an utterly imperfect car trying its best to thrill, while the i20 N Line is a competent one that’s trying to do the same. It endears me more to the Palio, and that’s despite me owning and sinking a lot of money into one.