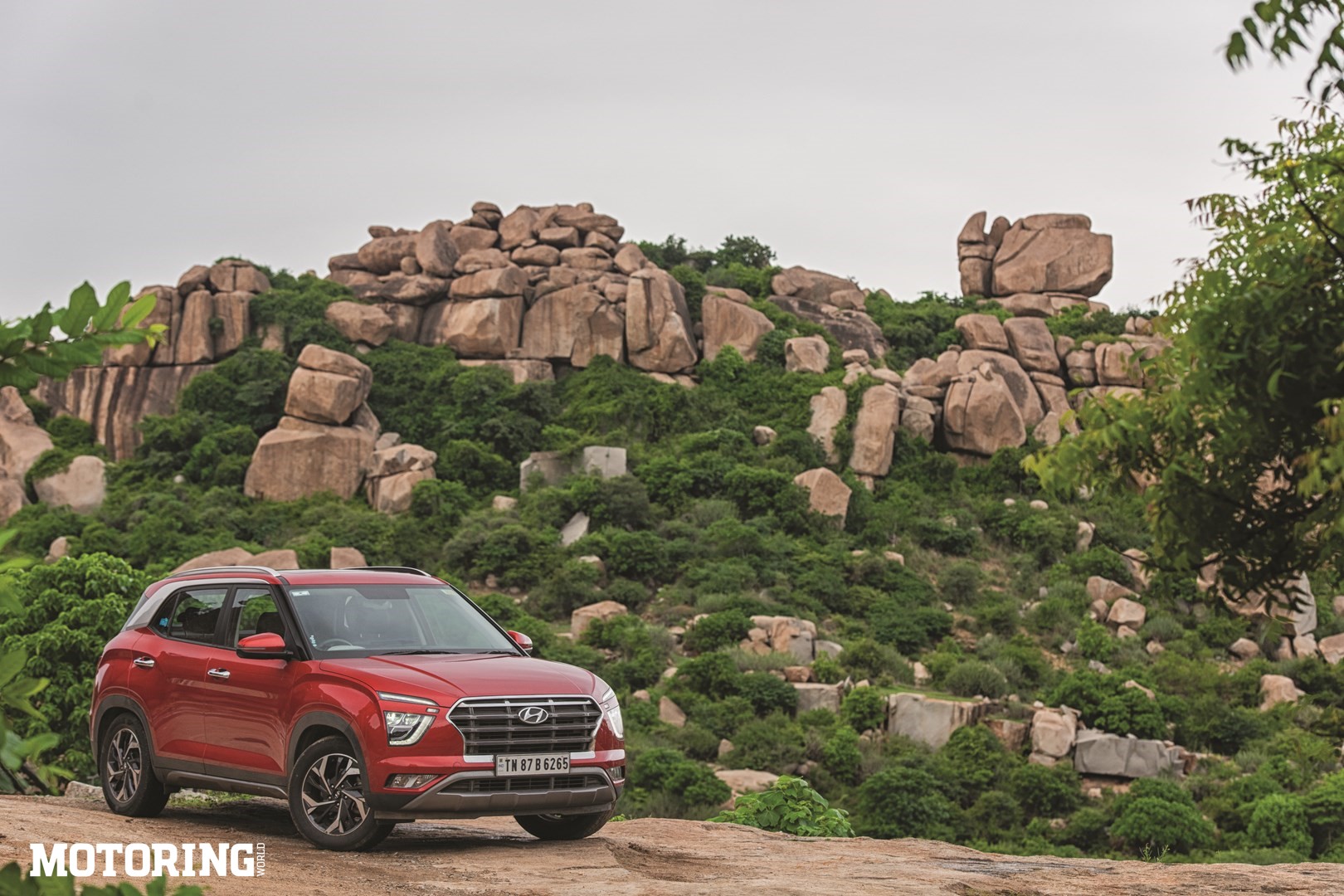 History plays a major role in how a country, kingdom, or even a carmaker is perceived. Not just legacy and good memories, it also defines, especially in the informed and aware world of today, what the future holds. Take the Group of Monuments at Hampi, a UNESCO World Heritage site, for example. The historically important collection of sites shows how a once-glorious city was turned into near ruins. Its stories, the scale of some of these monuments, and the eventual devastation caused by annexing kingdoms all form the history of this. Similarly, a few hundred kilometres southwards, the Great Living Chola Temples, has its own story, too — of how they survived various rulers and how it continues to flourish. It’s like two sides of the same coin, these two UNESCO sites; one shows how a wealthy city was brought down while the other shows the propagation of arts and culture through various kingdoms. To experience the two, we drive down from Hampi to Thanjavur in a car that’s not just historically relevant in the Indian car market, but is also multi-faceted, like the two sides; it is the Hyundai Creta. 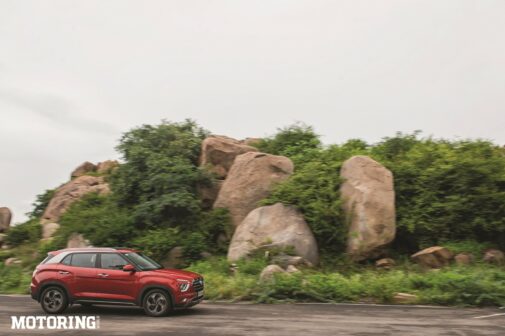 At under 6 hours from Bengaluru, Hampi is a must-visit for those who love history. This was the capital city of the wealthy Vijayanagar kingdom, the last Hindu ruler of the area. And it’s easy to see the wealth the moment you step into any of the monuments included on the World Heritage List by UNESCO. There’s a lot to see and appreciate in Hampi: from the remains of the building from the Vijayanagara era (essentially everything that’s included in the UNESCO list) to Kishkindha — said to be where Lord Rama met Hanuman in the Hindu epic Ramayana. According to UNESCO, there are 1600 remains from the Vijayanagara era: complexes, forts, temples, gateways, mandapas, etc.

While covering Hampi in its entirety would take much more than a day, with whatever little time we had, we began exploring the area. The Krishna Temple complex, with scaffolding on the facade, might seem like a structure under renovation from the outside. But step inside, and its scale is bound to amaze you. The sculptures are intricate, and while damaged in the past, it’s hard to look past them without spending at least a handful of seconds embracing the beauty of it all — and appreciating the craftsmanship, too. The overzealous security guards wouldn’t let you take a tripod out for a long-exposure shot, but a glimpse of the temple is good enough to give an idea of what lies ahead. Similarly, the grand statues of Narasimha and Ganesa are equally mesmerising, and so is the nearly nine-foot-tall Badavilinga shrine.

The great bit about Hampi, especially for travellers, is that all these are connected by road, so you can park and visit the monument, and drive to the next one. The distance between some of these requires a motorised means of transport — and the 1.5-litre, diesel-engined one that we had seemed to be perfect. We’ll come to that in a bit, but first, let’s reminisce about the next monument. And let’s not forget that the chance to drive through the gateways like Talarigatta makes the experience even more fun.

The Lotus Mahal, which is said to have got its name due to its lotus-like appearance, was made for the queens of the Vijayanagara kingdom. The palace itself has a mix of elements from Indo and Islamic styles of architecture, there are wall carvings inside, and it’s been designed in a way to facilitate the flow of air to keep the temperature low. Not too far from the Zanana complex are the pretty spectacular elephant stables. The area was guarded by watch towers around it; three of these are still around the complex. We head to the Hazara Rama temple from here, which as the name says, is the temple of a thousand Ramas. It’s said that the whole of Ramayana is depicted here using wall art. The same theme continues inside with detailed wall inscriptions on the black stone pillars. Right opposite the temple is the paan-supari bazar, similar to the Krishna temple, which also had a market in front of it.

A quick drive takes us to the Royal Enclosure, which has the Mahanavami Dibba, an elevated platform, now devoid of a structure on the top, which gives you a great view of the surroundings — and the ruins. There’s also a stepped tank within the Royal Enclosure, along with what’s called the Octagonal bath and the Queen’s bath. The latter is located not too far from here, but it’s rather intriguing. On the outside, it’s just a rectangular building that could be anything from an office complex to an ongoing restoration project. But it reveals its architectural features inside. It’s an open-air bath inside, surrounded by wall work, arches, windows, and a moat on the outside.

Our short escapade in this remarkable city comes to an end with the popular Vithala Temple. An electric cart takes us to the main temple complex, and we’re greeted by the excellent Stone Chariot. The Vithala temple is said to be one of the finest examples of architecture from the Vijayanagara kingdom. In just over a decade of being built, it was ransacked by the invading king’s forces. When you can make it past selfie-stick-toting tourists, you’d find the various mandapas have decorated columns with exquisite artwork, equally beautiful ceilings, raised platforms, etc. Every gopuram we saw, every mandapa we crossed, it just served as a reminder of how glorious Hampi would’ve been.

We got in the car, and drove past the large Kamalapura Lake (which is easy to miss if you’re coming to Hampi from Hospet as it’s right after the entry to Hampi takes you on a separate path) and prepared for a 12-hour journey the following day. And by preparing, I mean getting some well-earned sleep. Because the Hyundai Creta makes long drives so effortless that one tends to forget to take a break. That’s not down to the ventilated seats, easy controls, or even the spectacular Bose audio system, but rather how well-rounded it is, mechanically. Of course the aforementioned help, but a large part of the credit goes to the brilliant 1.5-litre diesel engine and the smooth 6-speed manual gearbox. The latter gives you the ability to extract great mileage on long drives, often making the most of the turbo-driven power, and without needing to downshift for overtakes. The panoramic sunroof helped us enjoy the incessant rain without letting even the tiniest of raindrops into the cabin. And when the skies cleared up for the sun to shine brighter than we anticipated, all it took was a press of a button to lower the cabin’s brightness. Nothing, and I mean nothing, hampered our progress. The Creta is a wonderful road-trip companion and if you ever question that, a long drive will clear all your doubts.

Like it did, in our case. The 13 hours or so it takes from Hampi to cross Bengaluru and onwards to Thanjavur went by unnoticed. What didn’t go unnoticed was how ready The Great Living Chola Temples are for tourists and travellers — because there are a lot of us. The Great Living Chola Temples is a collection of three temples: one in Thanjavur, one in Gangaikondacholisvaram, and one in Darasuram. These depict the architectural supremacy that the Chola rulers had, Maratha influences, and of course, top-class preservation, and most importantly, no destruction by invaders.

The Brihadisvara temple (or Big Temple, as it’s called) at Thanjavur is said to be the peak of architecture during the Chola period. It’s a live temple, which means people don’t come here just for its historic relevance, but also to pray. It’s quite a massive temple, but even looked up close, you’d see the carvings are highly detailed. On the periphery of the main complex, there are sub-shrines. The main temple is not short on reasons why it must be on your bucket list, and with people queuing up for darshan and no photography allowed inside, you’ll need to visit yourself to see it. But that’s going to be worth it!

The Brihadisvara temple at Gangaikondacholisvaram shows the Chola supremacy when it comes to metal work. The sculptures are something else there, and since it’s not as crowded as the Thanjavur temple, it can be covered on the same day. One just needs to be mindful of the temple timings, though. The third temple, the one at Darasuram — called Airavatesvara — might be the last one on the list, but it’s no less important. The Airavatesvara temple is home to some great Chola sculptures and unsurprisingly the amount of sculptures is off the scale, especially considering it’s smaller than both the other temples. Its front mandapa is visualised as a chariot. And if you liked the Stone Chariot in Hampi, you’d appreciate this, too. 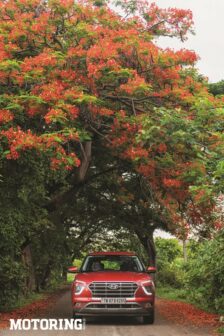 There’s a neat parallel between the Group of Monuments at Hampi and the Great Living Chola Temples. One witnessed devastation under different rulers while the other flourished. Both represented the pinnacle of architecture during their respective times, and both have an equally important place in history. What joins these two is a car that has shaped the Indian market, shown many carmakers that they ought to have a midsize-SUV in their lineup, and has been the customers’ product of choice for years. Since the Creta’s arrival seven years ago, it has offered buyers the best powertrain choices, features, comfort, and the ability to eat miles without breaking a sweat. The second-generation car took it all a level above and set another precedent. As an everyday car, it shines when handling the tightest of urban spaces, keeping driving comfort over fun, making commuting hassle-free. But show it your favourite winding road or endless highways on a cross-country trip, and it’ll be equally at home negotiating all that. Like two sides of the same coin…