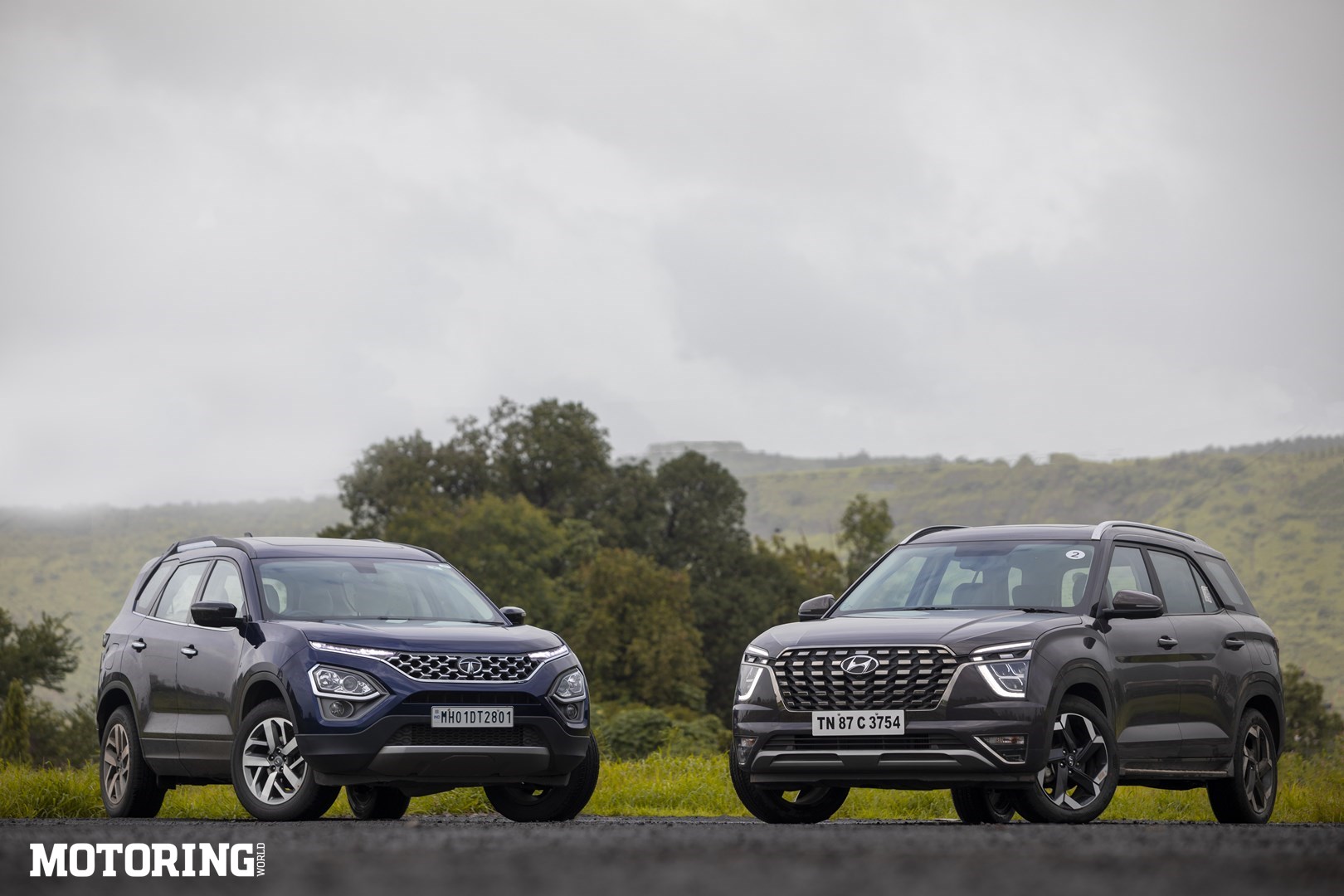 Six-seat monocoque SUVs seem to be gaining popularity. While some would attribute Maruti Suzuki with pioneering the space with its Ertiga-based XL6 in August 2019, MG Motor’s Hector Plus, which launched in July 2020, renewed interest in the segment. In the span of a year, Tata and Hyundai have thrown their respective hats in the ring — with the Safari and the Alcazar — and Mahindra’s upcoming XUV700 will join them later this year.

These SUVs are aimed at the more compact family units; those who are living without an extended family, are looking to start one and have the option of being chauffeur-driven. To that end, there’s an extra amount of effort made to make the second row as comfortable as the first. I’m on a mission to find out how true that is, with the two newest entrants, the Hyundai Alcazar and the Tata Safari.

At the outset, let me say I prefer the driver’s seat to any of the passenger ones and it’s difficult to convince me otherwise (the Maybach GLS got close though). Both these SUV’s driver’s seats are well-bolstered, comfortable and six-way power adjustable, though the Alcazar’s come with ventilation, which is an absolute boon on hot days. You sit higher up in the Safari though the rather thick A-pillars and long bonnet hamper overall visibility and it takes a while to compensate for just how big the SUV is in tight spaces. On the other hand, the smaller Alcazar is much easier to manoeuvre in the city with the 360-degree camera and blind spot monitors helping out tremendously. Overall, the Hyundai’s driver’s seat is a nicer place to be in compared to the Safari, and the experience is enhanced by the easy-to-view digital instrument cluster; it’s a bit easier to read in bright sunlight and far cheerier than the Tata’s part-digital unit. I’m not a fan of Alcazar’s flat-bottom steering though.

Interestingly, both have a Hyundai-sourced 6-speed automatic transmission sending power to the front wheels, though the diesel engines they are mated to are quite different. The Alcazar’s 113-bhp 1.5-litre turbocharged engine is punchy enough and delivers power quite linearly, but you can tell there’s a diesel unit under the bonnet. It’s no surprise the Safari’s 168-bhp 2.0-litre diesel engine (borrowed from Jeep) feels stronger. It’s got a 10.19 kgm advantage too, and it shows — if you’re going to accelerate hard in city and sport modes, keep the steering dead straight as a slight tilt can make the car pull hard in that direction. Driving the Safari in an enthusiastic manner feels like it’s a barely restrained beast with the tyres and electronics managing to just rein it in. In my book, that makes it a bit lairy and fun, but it’s not for everyone.

The Alcazar feels considerably more manageable when pushed, making it not as exciting, but it’s all-wheel disc brake set-up also sheds speed more confidently than the portly Safari’s four discs. Neither SUV is a corner carver, but it is the Alcazar that strikes a better balance between ride and handling, albeit by a small margin. While nothing seems to phase the Safari’s Land Rover-derived monocoque chassis and bump absorption is excellent, there’s too much roll, pitch and yaw and the hydraulic steering weighs up inconsistently too. Although both cars also get terrain modes that do alter the drive slightly, neither is meant to really go off-road. The Safari could take on a light trail route but it’s a far cry from the previous Safari’s capabilities; remember, it had a ladder-frame chassis and a 4×4 system too. 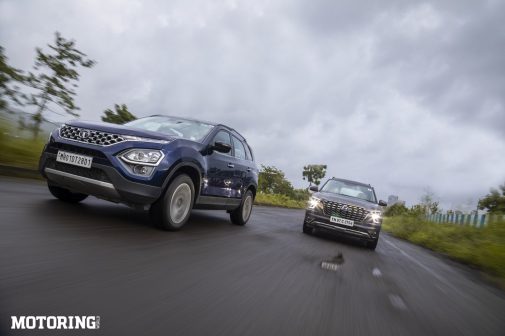 Coming to what makes these six-seat SUVs unique, the second rows get four-way adjustable captains chairs instead of a bench and in both cases, those with rounder rumps may feel a bit cramped. Still there’s ample breathing room in both cars that’s accentuated by the panoramic sunroofs though the Alcazar surprises with its roominess, which is, in part, thanks to the 19 mm in the wheelbase it has over the Safari. It seems like Hyundai has tried harder to enhance the second row experience by adding tray tables to the front seat backs and wireless charging and it works. Tata isn’t too far behind though as in the Safari, the left side second row passenger can adjust the front passenger seat to their liking with the aptly named ‘Boss mode’ function.

Access to the third row in the Safari is between the second row seats. While the captain seats do fold away, the function is only to liberate cargo space and not for access. The Hyundai’s one-touch foldaway function makes it easy to access the third row. However, full-size adults will definitely be more comfortable in the Tata than in the Hyundai, when it comes to third row space, although the AC blower controls and USB ports are both only on the left side. Still, over long distances, the third row is best for children. Naturally, boot space is at a premium in both SUVs with all the seats up and it is advisable to fold the third row in to make room.

Another aspect these SUVs share is that they both have a five-seat sibling that looks similar from the front, which may hamper their appeal to some. It is from the sides and the rear that the Safari and Alcazar stand out when compared to the Harrier and Creta, respectively. There’s no doubt the Safari looks the part of an SUV — it’s big, rugged and stands fairly high above the ground. The Alcazar shares its polarising front-end design with the Creta, but with subtle changes, However, the rear of the bigger Hyundai is definitely more eye-catching than its five-seat sibling and that really helps the Alcazar’s case. While looks are subjective, between the two, the Safari looks the part of a big SUV. 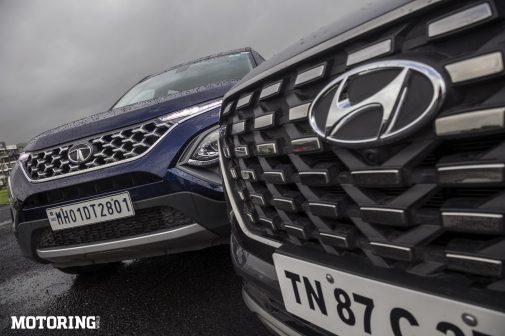 On most metrics, it is the Alcazar that nudges ahead of the Tata Safari, and its price tag is another area where the Hyundai SUV manages the same. This range-topping Alcazar Signature (O) variant with the dual-tone paint scheme costs Rs 20.15 lakh, ex-showroom, Delhi, and comes with far more equipment than the near-top-spec Safari XZA+ we drove, which is priced at Rs 21.64 lakh. So, if you’re looking for a six-seat SUV that is good to drive and be driven in, the Hyundai Alcazar is your best bet. 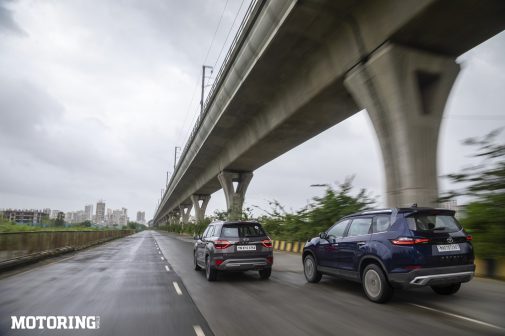