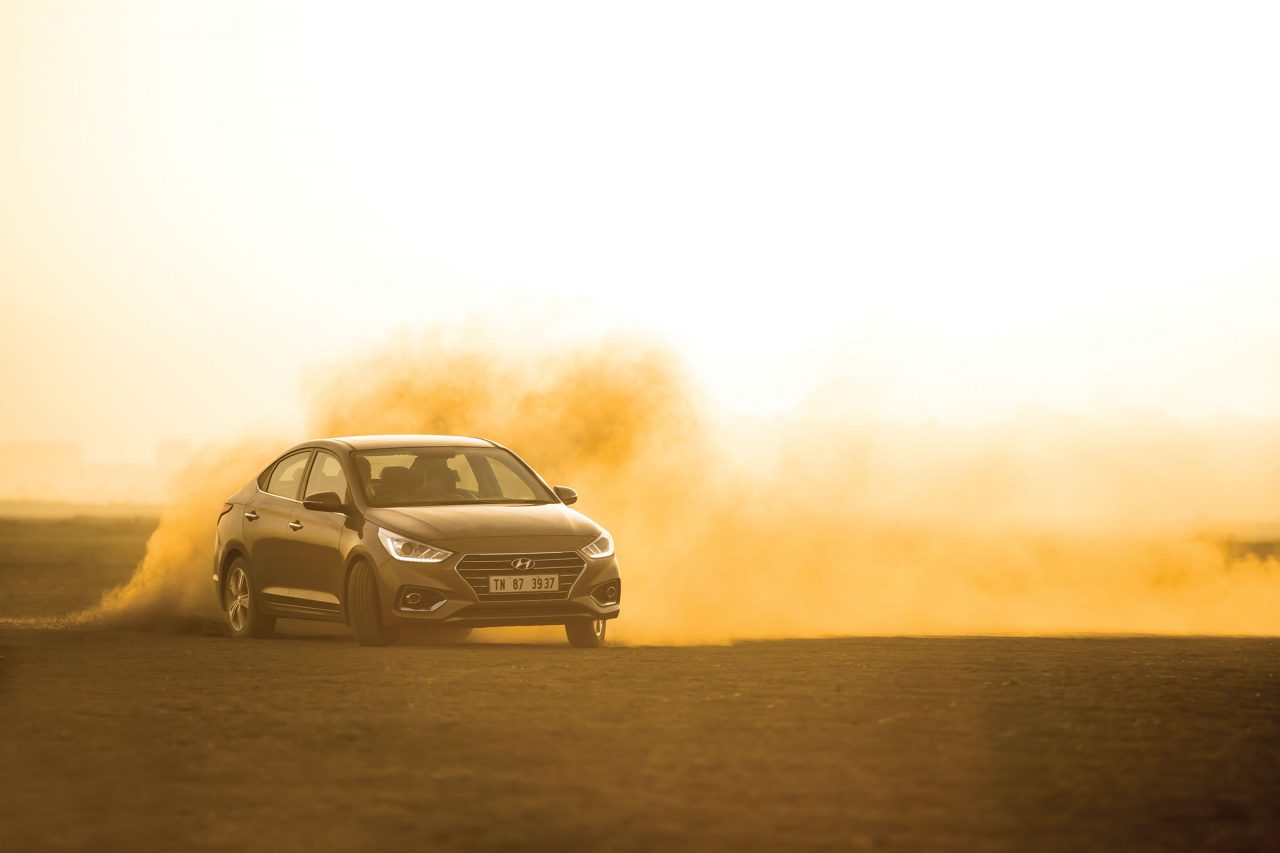 I’ve tried explaining it before, but it’s not really something I’ve done justice to. This is the first time I’ll be putting, well, keyboard click to computer screen about the experience, so I’ll try to make this more lucid. Here goes nothing.

I like it when it hangs out. I’m not bothered by the fact that, for the purpose of this story, there’s a cameraman holding on to my every change in direction, or the fact that this will be published and (hopefully) read by thousands. I will also corroborate this fact: I’m hardly an authority of any kind when it comes to this particular, well, let’s just call it an unnatural phenomenon for now, but heck it feels good. It’s the disillusioned feeling of control I’m afforded when things are at their awry worst from the outside, that’s what’s mind-boggling about getting your car’s tail to hang out and holding on to it for what seems like eternity.

Then again, it’s not that unusual, is it? Just last month, in fact, Sherman went and experienced a Flat Track event, and that’s all about precision and control in the most unlikeliest of times — when you’re hanging your behind out to dry. I suppose it’s the same with cars for me. And what I love most is doing it in cars that aren’t strictly designed for the purpose.

What I’m going to try to do here, in the space that’s very graciously been allotted to me on this website, is pen down the things you should and shouldn’t do when you’re attempting to break traction on purpose. 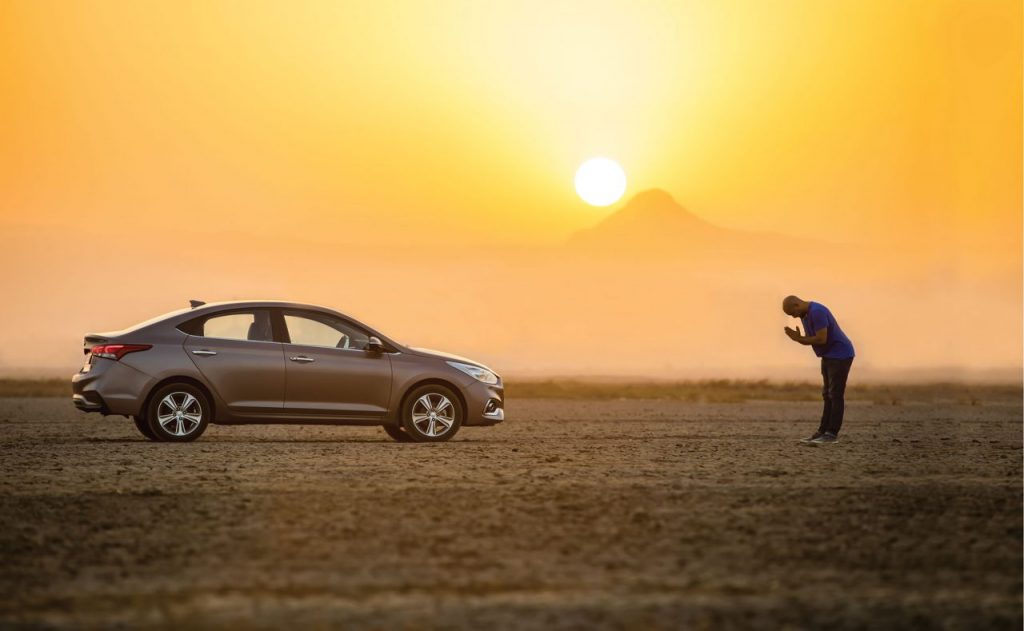 Check Yourself
And by that, I mean check what you’ve got to play with. Don’t, like the pages of this article show me doing, blindly believe in the powers-that-be and bow down and pray to your car like it’s an animate, breathing life-form. You need to listen to what your car’s doing and saying, sure, but you also need to remember a thing or two about mechanical empathy.

Cars like the Hyundai Verna we have here aren’t meant to be slid around for your pleasure. They’re comfortable, relatively luxurious ways to get to point B. That said, it doesn’t hurt when the car, especially in this case, is as fun to drive and thoroughly chuckable as the Verna is. So here we are.

Ensure that your car is healthy. Check its vitals, tyre pressures are key, and don’t, for god’s sake, leave things lying around in the car. Things can come flying at you while you’re mid-drift faster than you can imagine. I’d know. I learned the hard way.

You’re also going to want to ensure that the place you choose to do this is absolutely devoid of any human life, animal life… basically any life form. While we’re at it, make sure there isn’t anything large to bang into, either, like a railing, or a house. You really don’t want to be practising this stuff when you can get it so very wrong so easily. Which is why, for exactly this reason, we’d located a rather large, deserted area with nothing to bang into for miles, and absolutely no vegetation or animals for as far as the eyes can see. No houses, either.

Don’t Be A Tw*t
And by that, I mean don’t bring the wrong car. Now, what you ideally want for this kind of exercise is a naturally aspirated vehicle with rear-wheel drive and a physical handbrake. What I’ve got, however, is a turbodiesel with the front wheels driven and a physical handbrake. Not a deal-breaker, but it helps to start out with something tough so that you can gradually build up to the good stuff. This exercise is all about handbrake-induced slides, so don’t get cars with electric handbrakes — that defeats the whole purpose. I’m not saying it’s not possible with them, because it is, but there’s a different technique  to follow, and this is way more  gratifying anyway. So that’s that. Now all you have to do is buckle up, and start driving.

As Far As The ‘I Can See’
One of the earliest things people teach when you start to ride or drive seriously is to always look where you want to go. It’s a principle that’s best used everyday. Going into a corner? Always look at where you want to be eventually, and just like magic, you’ll be there. Of course, you do need to focus on the road right ahead of you as well, so a bit of peripheral vision doesn’t hurt, but the point remains. And it’s applicable while pulling slides, too.

On the ground we’re on, we didn’t have the luxuries of road markings and a course of sorts, but I’d done a bit of planning and mapped out an imaginary course that I stuck to all through. This helped avoid irregularities on the ground that could hit the car, like small rocks and ruts.

Now, if you’re even slightly acquainted with the basics of a racing line, this bit will be pretty easy to understand. The general line taken when you’re on a track is wide-apex-wide, and that applies here as well. You enter wide, turn into the corner, hit the apex, and exit wide again. At this point, I should explain a few things. There’s a subtle difference between a drift and a powerslide. A drift is when you try to take the tightest line around a corner, but you’re already sliding into the corner, well before the apex, and sliding out wide. That isn’t what we’re going for here. What we’re aiming at is a powerslide. It doesn’t last as long, and is pretty much the most of what you can expect from a front-wheel drive car, but it’s highly satisfactory, nonetheless. The difference here is that you start the slide at the apex instead of before it, and power your way out wide to the next bit of the track, all the while trying to maintain the slide for as long as possible.

How do you do it? Well, for starters, make sure you’re seated as low as possible and have a decent distance to the steering wheel. It’s critical to stick to a gear that you know will give you the greatest flexibility in a speed range you’re comfortable taking the corner at. In this instance, it was always second gear at about 45-50 kph. Now, enter the corner at a comfortable speed (remember to keep at least a few thousand revs in reserve for when you’re powering out), yank the handbrake with the steering in the direction of the apex, and once you feel the rear breaking traction, quickly begin to turn the steering in the opposite direction of the turn you’re going into.

Here’s the tricky bit: While you’re doing the last part, the car is going to decelerate rapidly, so it’s key to modulate the accelerator and power out. And I really mean modulate. Slamming the throttle down fully won’t cut it, and neither will a feather touch. You will need to listen to what the car’s doing and keep the momentum going by playing with your accelerator and handbrake input. This is a multi-tasking nightmare, I understand, because you’ll be using your right leg for the accelerator, your left hand for the handbrake and your right hand for the steering. Don’t lose heart, though, because it comes with a bit of practice, as does everything worth learning.

Just remember that the key to getting this down pat is making mistakes over and over again. If you find yourself in a situation where you’ve just done a full 360-degree spin instead of catching the slide after the apex, well, that’s normal. It happens loads of times. It just makes the first time you nail it all the  more sweeter.

I can’t stress how important it is to do this on a deserted stretch of land. Doing it on public roads is highly irresponsible and it can very easily go wrong and hurt others in the process. That’s why a controlled environment is the order of the day and you simply can’t get a better environment than that to practice in. I have to add, though: the satisfaction of nailing a perfect drift or powerslide? It’s unparalleled. Just remember: no humans or cows or other animals should be nearby. Or even a house for that matter.