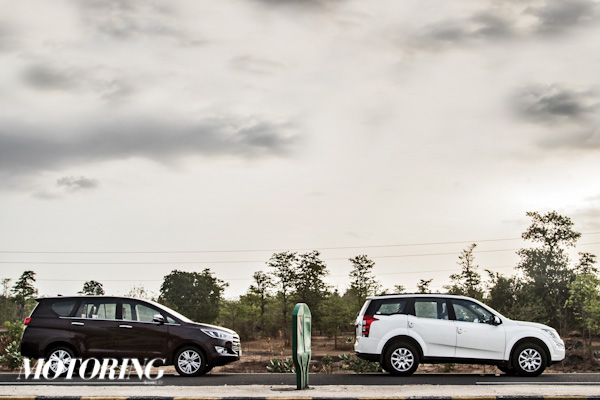 You’ve arrived in life and can afford the best of the automotive industry, but you’re of a practical bent of mind. You need the boot space or the third row of seats. You also like driving once in a while. What do you do? Until recently, you’d have to spring for a Mercedes GL, but now you can get everything you want for a lot less, thanks to the Mahindra XUV 5OO AT AWD and the Toyota Innova Crysta AT.

… and you’ll find that there’s two distinct schools of thought here. The Mahindra looks like a butch SUV and it leads from the front with its high, bluff nose. The grille has lovely chrome ‘cats’ claws’ touches on the top-spec variants, and the post-facelift bumper is a cleaner design. The LED light guides take the design even more upmarket and the headlamps offer a premium touch. More SUV cues are available in the faux skid plate at the bottom, the large wheel/tyre combination and the bulging wheel arches that bulge so much, the rear one seems to intrude on the window line! At the back, there’s some more chrome above the number plate and the twin exhaust tips, and the squat wide stance all keep it true to its SUV heritage.

The Innova, on the other hand, takes another approach to design. It makes no bones about being an MPV, because an SUV based on identical underpinnings already exists. It’s called the Fortuner. Toyota seems to be giving its vehicles across the range  similar styling cues and we can see hints of the Corolla Altis and Camry in the Crysta’s front end. It’s an aggressive nose, led by the two-slat chrome grille that connects the headlamps. The headlamp units match the XUV’s feature for feature, offering a projector low beam, separate bulb-and-reflector element for high beam and an (inner) LED running lamp. The turn signals are placed strangely low down next to the foglamp housings and the grille can look awkward in low-angle images because it emphasises its width at the bottom. From the side, it is unashamedly an MPV, but relief is present in the form of smartly-designed alloy wheels and chrome on the door handles and mirror housings. The rear is where things fall apart. The rear wheel arches bulge from the rear door onwards, but never fall away, instead carrying on to the end of the car parallel to the ground in a 21st century parody of the ‘pontoon’ design that Mercedes once had. Then there are the tail-lamps; the outgoing generation has triangular tail-lamps that emphasise their verticality, but the Crysta has a horizontal array — except for the turn signal indicators, which are downward sharktooth extensions. Combined with the strangely not-quite-triangular-or-trapezoid rear quarter glass and those wheel arch flares, it makes for a very confused design.

The Innova is mostly sharp edges with some rounded corners, while the XUV is as rounded as a river pebble with a few sharp lines thrown in. We’re going  to give this to the XUV  because it is a cleaner,  more complete design.

The name of the game here is features. There’s a mile-long list for both of them, so let’s start right at the front. The Innova outscores the XUV in the headlamp low beam — the light source is LEDs. Where the XUV gets back is with static cornering lamps. In the driver’s seat, there’s a host of similarities: there’s a wealth of information available at your fingertips and on the screen in front of you, but the Innova inches ahead with more features like the ‘Eco’ indicator and voice command functions.

There’s also a much higher quality capacitive touchscreen in the Toyota, but it misses a few essential tricks like the XUV’s auto-folding mirrors. It adds to the party keyless entry and go, and a rear middle headrest, but the XUV offers AWD. This back and forth goes on for the entire duration that you spend in the cars. However, the Innova is undoubtedly the more comfortable place to be in. The MPV body style frees up a whole lot more space to play with and as a result, there is more leg-room cumulatively over three rows.

The brown leather isn’t exactly to our liking, but we do so like the suede elbow-rests on the doors. There’s adjustable reclining for the second row of seats, while the driver’s seat gets electric adjustment. Toyota missed a trick by not including lumbar adjustment for the driver, but adults will be comfortable for a much longer time in the third row of the Innova. Not just that, the second row of the Innova feels special to be in, and it isn’t just the captain’s seats or that it is extremely simple to move the front passenger seat ahead while you’re in the back. It’s the diffused blue lighting and the swoopy design in the Crysta’s roof. It looks inspired by a first-class airline seat, or a luxury yacht. We love the fact that you can’t experience anything like it near its price bracket.

The XUV isn’t half bad, mind — it’s just that it’s things like the separate digital climate control that make the backseat occupant in the Crysta feel like they’re the boss… and they usually are, so this is important. Curiously, it’s the ladder frame chassis here that has the driver sitting low down, like a car, and the monocoque construction that offers the eagle’s nest view of the road. Which is better depends on your point of view (see what we did there?), but we prefer the Crysta’s driving position because it is more comfortable over long jaunts.

There’s a long list of safety features, with the Innova getting ahead because of standard ABS and two airbags across the range, and the top-spec variant has a knee airbag over the XUV, for a  total of seven. ESP is standard on both top-spec cars. There are ‘Eco’ buttons in both cars, but the XUV’s only optimises the climate control, while the Innova’s changes the throttle map as well as the climate control.

The XUV makes a real effort here, with the cooled storage and the blue lighting and the logos projected by the puddle lamps, but the Innova’s ambience, especially at night, coupled with the sheer space and comfort blows it out the water.

There’s a fundamental difference of concepts here — the XUV offers a front-engine, primarily front-drive architecture out of a transverse  engine that serves up all-wheel drive when necessary. The 2179cc four-pot generates 140 bhp and 33.65 kgm from 1600-2800 rpm. The Innova offers a 2.8-litre four-cylinder engine that generates 170 bhp and 35 kgm from an even wider 1400-2800 rpm band and feeds the rear wheels.

The gearboxes are similar in philosophy, but while the XUV has a torque lock-up converter, the Toyota goes with a gearbox that doesn’t lock up and it coasts every chance it gets in ‘D’ mode. It’s an acquired taste, this, and certainly quite scary when you’re going around a corner and get off the gas. The XUV exhibits some of the same characteristics,  but it thankfully refuses to disengage in the top two gears, which offers more control at speed.

Both offer six speeds and manual control, the Toyota through a traditional sequential shift and the Mahindra through the strange buttons on the gear knob. The  Toyota also offers an ‘S’ mode for spirited driving or for driving with load, as it doesn’t freewheel.

WHICH WOULD YOU RATHER DRIVE?

Would you rather have the monocoque chassis that feels like an old-school SUV or would you rather have the ladder frame with a more car-like feel? The XUV floats above the road, bobbing around like a ‘true’ SUV. Sure, Cayman Dynamics have made it better than before, but it isn’t a true driver’s car. That said, that AWD system offers a lot of security especially on loose surfaces.

The Innova, when it originally launched, was a revelation — it was an MPV that was great to drive as well. The new one carries that forward. Combine that with the lack of weight over the rear wheels, the stiff rear suspension and the efficiency-oriented tyres, and you have a car that’s quite willing to go sideways. No, really. Turn the ESP off, turn in, mash the throttle and once the gearbox wakes up, the Crysta will leave you grinning.

At cruising speeds, the Innova is better. The XUV is a little more raucous and  hardworking at similar speeds. There’s no question that we’d prefer the Innova on tarmac, but on the loose stuff the XUV with its connected gearbox, more compliant suspension and AWD will be the car to choose.

The XUV doesn’t have as much space, comfort or a truly usable third row. The Innova doesn’t look desirable — and you’re going to look the same as a million commercial vehicles eventually. The Innova isn’t going to be as efficient as the XUV despite the higher ARAI rating, because of the lack of a lock-up feature of the  auto ‘box.

The Innova offers a truly special interior for the second row, but you could have an XUV and change instead. Rs 20.8 lakh, ex-showroom, Delhi, is how much Toyota will ask you for the Innova  Crysta. Mahindra, on the other hand, will ask for Rs 18 lakh. You certainly get what you pay for with the Innova and if you’re of the philosophy that you need to pay more to get more, then by all means, your choice is ‘Crysta’ clear. However, if you value, well, value over brand image and residual values don’t bother you much, it’s the XUV for you. We know we’d pick the latter, because it offers so much more at the price.