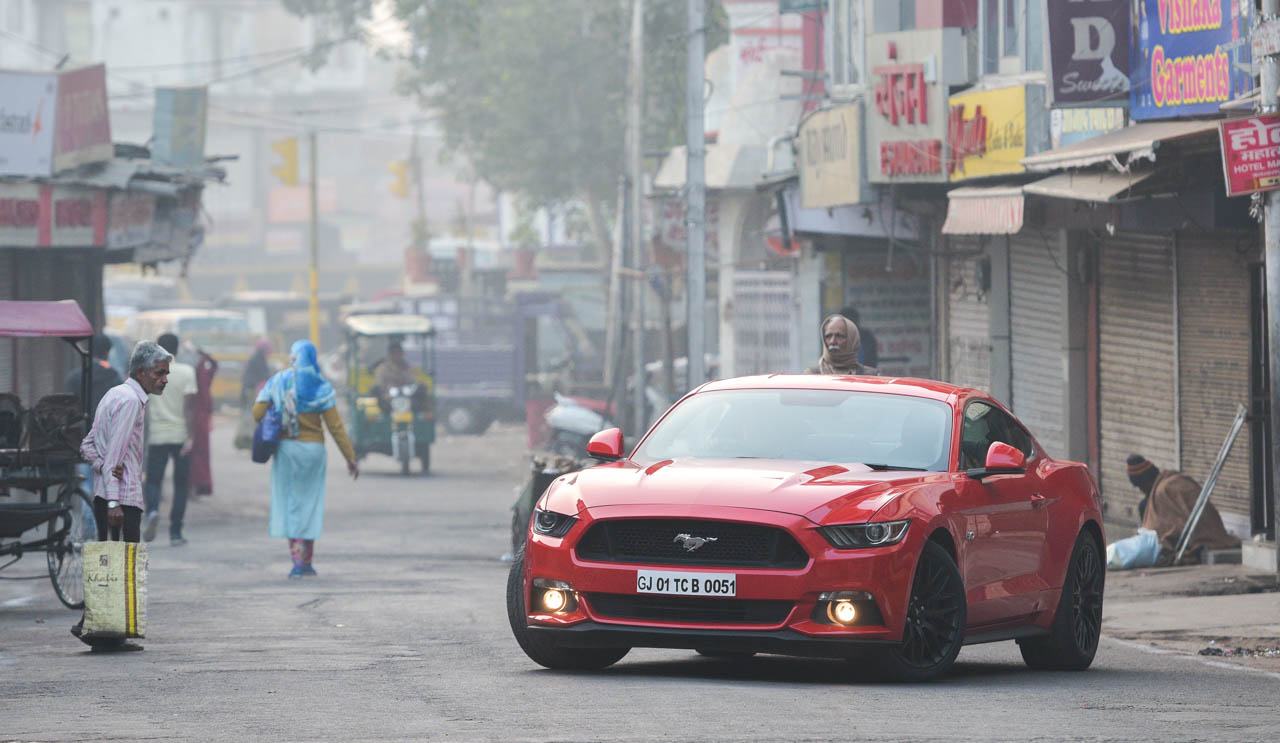 It might need no introduction, but the Ford Mustang has this wonderful ability to make you feel special about yourself, without necessarily turning you into a snob. Most similarly priced cars do that, but that’s generally accompaied by the sense that you’ve made it big in life. Which is no bad thing, but then it turns into all about accomplishing one’s goals, rather than the journey itself. No matter how clichéd it sounds, the Mustang is all making it big but without forgetting about the journey. Here’s what we learnt on a 400 km journey in what’s essentially the Full English of sports cars, the Mustang:

Contrary to how earlier iterations were reported to drive, the new one (sixth generation, and the brand’s 50 years old already) is almost docile, well-behaved, and friendly. And although it makes its weight apparent once you turn in, the Mustang is quite a charmer, especially for on-, public-road use. It had no troubles steering away from the city traffic, getting onto the smooth and straight highways of Rajasthan, and didn’t break a sweat even in the twisty sections.

You must keep in mind that it’s a heavy car, so as long as you give it respect, it is unlikely to bite back. It is stable beyond words, and as long as you’re not provoking it too much, it will have no issues staying in its neutral line.

Can it be your everyday grocery-getter, you may ask. Yes, once you’ve invested about Rs 70 lakhs on a car, you would want to use it the way you want. And just like how it handles the exciting bits of driving, the Mustang has you covered for the mundane everyday tasks as well.

Keep the steering in ‘Normal’ and you won’t mind driving for as long as you can find roads. Talking of which, bad roads aren’t an issue for the car, either. The suspension copes up with most bumps a half decent road can throw at you, and since it sits at about 137 mm off the ground, speed bumps aren’t exactly a problem. Of course the illegally-made ones still need you to attack them sideways (erm, not with full power and at lock stops, though).

Also, it’s spacious inside. The two-door layout isn’t favourable enough to take your mother-in-law out for shopping, but with the huge boot and good space (for a coupe) at the back, your partner won’t be dissatisfied with its everyday practicality — or leaving their mom back home.

It can also run on regular petrol, so there’s no hunting 97-octane fuel, which can become a tiring affair, since that’s not widely available across the country yet.

It’s always the centre of attraction

Like other two-door sports cars, the Mustang never fails to make heads turn. But while a lot of other coupes might go unrecognised, the Mustang is iconic enough, even to the untrained eye. And once the more interested bystanders come close to the car to know more about it, you engage in conversations telling them how it’s more of a people’s sports car. An almost 400 bhp-producing 5-litre V8 engine for the price of something that would take you to a boardroom meeting and back?

If that’s not a bargain…

It pulls off being cool, despite the added bulk, so effectively that it almost feels unreal.

It’s not perfect; actually far from it

Of course, at Rs 65 lakhs, ex-showroom (Delhi), the Mustang is a lot of car for that money. You can pretty much do just about everything with it, as long as you have access to good roads, and maybe a racetrack.

Talking of negatives, we, in India, don’t get the manual gearbox equipped version. And the V8 makes fewer horses than other right-hand drive equivalent, say, the Mustang in the UK. There are of course track-only features like Line Lock, which might not make up for the loss, but are still a good consolation.

Also, since it’s made to cater to a wide audience and not just one kind, you’ll have to invest to make it more focussed. For instance, if you fancy using every bit of the 5-litre V8 on a racetrack, you would want to get a better exhaust, more supportive seats (the current ones aren’t great) and some weight loss (for the car).

Should you buy one?

That’s an easy one; yes. If you’re looking for a grand tourer, then the Mustang is quite the car for you. And sky is very much the limit for modifications, so if you want an expensive track tool without having to go the usual ‘Euro’ route, the Mustang can fit that requirement, too.

You also don’t need to be a historian to understand the car’s relevance. And since it’s been confined to LHD markets until now, the Mustang’s arrival is more special than ever. Buying one wouldn’t just mean being the owner of another Mustang, it’s also sort of a wildcard entry to the Mustang fraternity. Having driven one, it’s easy to understand what they’ve been crazy about. Since 1964.

You can read more about the journey in the January 2017 issue of Motoring World.