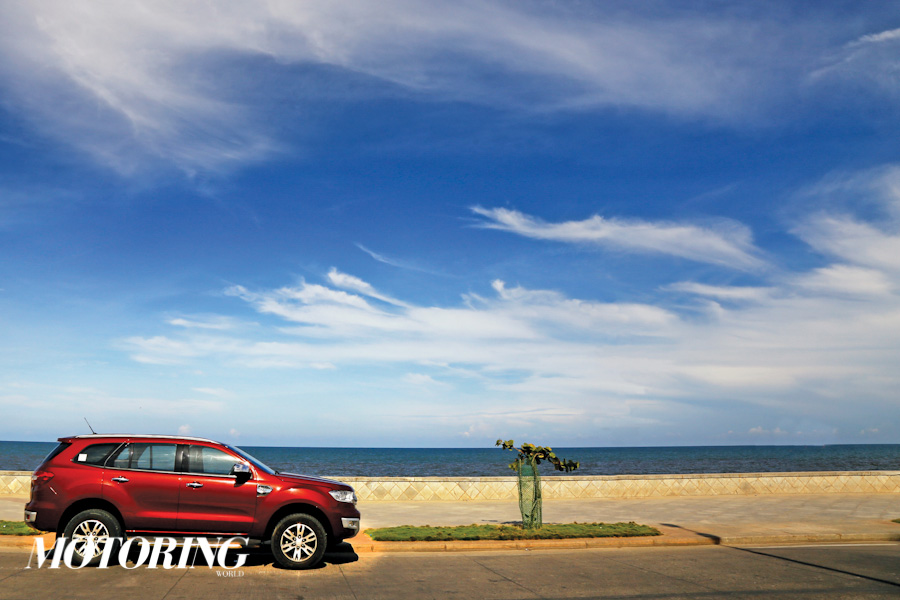 Dark clouds stretched over for as far as the eye could see, enveloping us in a sort of protection that, ironically, felt a bit threatening. It was as if nature was looking to smother us as we made our way down the road. The waves crashed heavily to our left, approaching in anger but retreating in awe as it hit the shoreline. To our right were fields that stretched on for kilometres on end. Stretching calmly in the middle was a ribbon of tarmac that seemed unperturbed by the happenings on either side, only to be disturbed by the occasional patch here and there that  needed revisiting by shovel-wielding men in hi-vis jackets and hard hats.

It seemed a little too idyllic, a little too hard to believe just how calming the overall drive to Puducherry was shaping up to be. Aditya, my photographer, and I had started from Chennai just a while ago, happy in the knowledge that a calming weekend awaited us. It’s amazing what even the prospect of a peaceful time away from home can do for your mindset and, selfish though it may sound, it seemed as though the rest of Tamil Nadu’s inhabitants were more than keen on allowing us just that luxury. Ford had loaned us an Endeavour for just this exercise and, so far, everything seemed to be clicking. The rather big and beautiful Endy obliged us with a relaxed pace all the way through to Puducherry via the undeniably scenic East Coast Road (or State Highway 49).

Puducherry itself struck me as a place where contrast and harmony exist simultaneously. There’s no denying it its beauty, wherein the French influence is obvious to see, but it’s the Indian flavour that the people have brought that makes it all worthwhile, if I’m honest. A quick look online will tell you that the city is divided into two parts: the French part (or, quite disturbingly, ‘White Town’) and the Indian part (or, quite disturbingly again, ‘Black Town’). It’s a distinction that’s hard to see, though, and rather unnecessary in my opinion, because while the physical demarcation is there to see, everything is run and upheld by some of the nicest people you’ll find. I can say this with a sense of assuredness because not once did anyone complain as we went about our business of getting in some shots of the Endeavour, a car that grabs attention wherever it goes. Similar photographic attempts in a place like Mumbai would have the police all over you in a heartbeat, not to mention the incessant honking that we’d have to endure.

On those lines, our stay for the weekend – the lovely Dune Eco Village – was a revelation of sorts. The lovely resort is located a few kilometres shy of Puducherry itself, and makes for an absolutely divine place to stay in if what you’re looking for is a place that’ll help you forget about the world in general and simply unwind. The villa we were allotted – the Beach House – had waves crashing not 50 feet from our doorstep, and really made the entire experience rather surreal.

That’s the problem, though, isn’t it? It’s hard to call time on a place like this. Everything came together so well. The road trip was perfect thanks to the Endeavour’s mega touring abilities, the stay was beyond picturesque, if that’s possible, Puducherry stunned us with its food and culture, and the friendly locals made it hard to swallow the fact that it would all be over sooner rather than later. I suppose the charm a place holds can only be appreciated once there’s been a deprivation of what you’re looking for. On that note, it must be said that Puducherry is one of a kind. It’s got a way about it that’s very hard to describe. My best shot at it would be that the people there are one with the city and with themselves. The place has a balance to it, one that makes it easy to soak in the fact that a fast pace or a bustling economy doesn’t always equate to a worthy life. We could all learn a thing or two from the place. Me? All I’ve learnt is that I haven’t been charmed enough, so I’m hoping to return sooner rather than later.