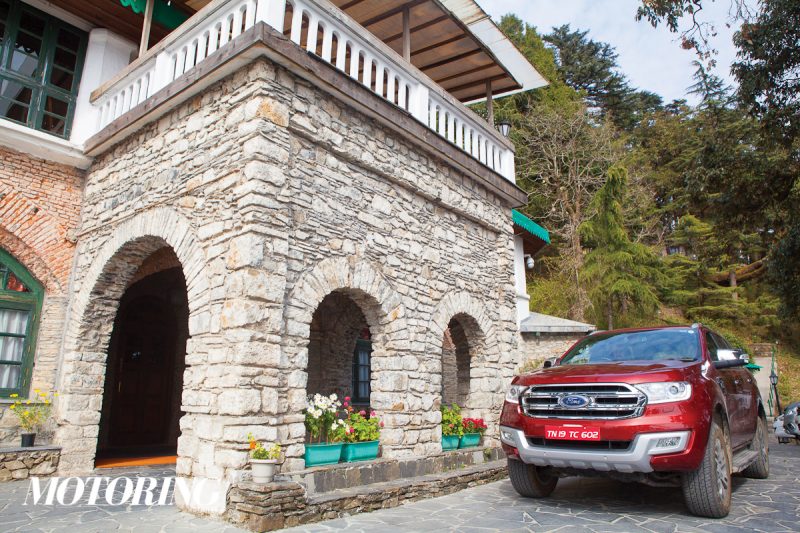 The dust cloud in the Ford Endeavour’s mirrors hasn’t even settled as silence descends upon its bodywork, like a light film of dew. Its muscular haunches bask in the glow of the setting sun, its edges cutting through the crisp Himalayan air even at rest. Only a moment ago, the Endeavour had barged onto what was once a spectacular colonial-era carriage-way like an avalanche, kicking up the most photogenic dust storm that lingered around longer than one would expect. That’s the thing about being up in the hills – there’s purity and wholesomeness even in things as hateful as dust.

While enthusiastic driving may not have been accounted for by the East India Company’s noble men as they set up warm, resplendent abodes in the upper reaches of Mussoorie, the Endeavour finds it fairly easy to make its way through. It has a presence that instantly commands respect amongst other road users, but on the inside, it’s as comfortable and effortless as being at home. In a bygone era, Sir George Everest may have found its presence immensely disturbing but were immortality one amongst his many talents, he’d probably have chosen to conduct his rather adventurous commute in an Endeavour, too. ‘Horses stink!’ he would say after executing a perfect powerslide up his kilometre-long driveway, the fine dust blinding the missus waiting by the porch, by now extremely wary of the juvenile manner of his ways.

Alright, while you are implored to pardon the ridiculousness of that thought, it is true that the Endeavour dominates just about any environment it’s driven into. A day earlier, it ferried a bunch of indulgent motorheads in complete isolation, largely owing to its quiet cabin and exceptional suspension, from the chaos that lines the national highway from Delhi to Mussoorie and now, here it was, giving unassuming tourists a demonstration of the World Rally Championship. Now, that isn’t exactly what we set out to achieve with the Endeavour, but let’s just say it brings out the enthusiast in you even when you’re not trying. The driving antics were, thankfully, limited by the sky having turned a deep shade of crimson and at this point, we were to head in the direction of the Rokeby Manor, our home for the next few days to come.

Mussoorie’s roads are narrow and tight but the Endeavour’s articulate handling characteristics make light work of what is otherwise every driver’s nightmare. While you never really get the chance to speed up, the serpentine nature of the roads work as a calming effect, slowing you down gradually until you hit complete standstill and the sack. By the time darkness sets in completely, we find our way to the hotel, set above (and away from) the bustle of the town. A paved incline leads us to the warmly-lit Victorian-era porch and a small army surrounds us, eager to attend to the finest details of our welcome. The cool instrumentation lights on the Endeavour’s dash turn to stealth and the push of a button releases the boot lid. The Rokeby Manor is spectacularly different to the typical league of luxury hotels in the country. No intimidating façade, no glossy new-age furnishings. It’s like a cozy English countryside estate, which is, in a sense, what it once used to be.

Built in 1840, the Rokeby Manor changed a few hands in its nearly two-century old existence, prominent among those being veterans of the British regime and also the missionaries assigned with important tasks in the region. It was only very recently, relatively speaking of course, that its current owners restored the Rokeby to its original glory, creating what is the most inviting luxury abode without taking away from the charm and warmth of the original structure. The Mars Hospitality Group, helmed by Rachna and Sanjay Narang, both tremendously articulate and well-versed with the world of luxury and leisure, took on the challenge and after much meticulous restoration and insightful design inputs, the gates to the Rokeby were finally opened to those seeking a date with tranquility.

A cackling fireplace takes up a discreet wall in the lobby, while lamps from a bygone era cast their warm glow over photographic remainders of Mussoorie’s history. We sink into the elaborate couches spread across the heavy pinewood flooring layered with soft but not ostentatious carpeting and soak in the silence. The Rokeby Manor is luxurious by all means but it feels, ultimately, like home – quite like the Endeavour, then. The hostility you so easily run into across 5-star properties is kept away and this means you can take up any nook and corridor of the Rokeby, book in your lap, and sip on the finest teas it has to offer all day long. You’ll want a lot of that tea, too, not just because it’s delicious but because Mussoorie, even towards the tail end of the winter, is pretty cold. After what felt like an eternity of sleep, the crisp mountain air ensured we were up by daybreak. The sun’s rays, diffused by a layer of condensation on the windowpanes, lit up an art installation within our room. Walk up to the window and what you see and experience is peace in its most stereotypical forms. Birds chirping, trees littered with leaves the colour of a flame and, of course, a disarming silence. No alarm clocks, no car horns, and even the chatty tribe of rosy-cheeked school kids were comfortably distant. Stroll up the magnificent stairway to the Wilson’s Chamber, pick a book of your liking from amongst the hundreds on offer and find yourself the best outdoor breakfast table at Emily’s, the hotel’s in-house restaurant. It’s an experience (hey, when was the last time you called breakfast that?) that will single-handedly ensure your return, year after year. A delectable assortment of teas and an indulgent English breakfast later, we groaned off our chairs to wander around the charmingly old-school property. From the cliff-side Tea Garden to the gravel paths adjoining the hotel’s 2-acre expanse, the Rokeby is straight out of one of those Enid Blyton books. You’d imagine big, furry canines basking in the afternoon light and sunburnt children scrunching into apples and you’ll very well see all of it (and more) only a few paces away. It’s a walk back in time, really, and it’s certainly a life you’d lust after if you spend an unreasonable amount of time behind a computer screen in your cubicle. As for us, we certainly made the most of the time we had at hand to while away, all along digging into
the resident chef’s most exquisitely prepared fare.

For those of you who like some form of activity, Mussoorie will disappoint since it isn’t big on adventure sports. Fortunately, we’d brought along our own in the form of Endeavour, so we set out onto one of its many off-shoots, which led us to the spectacular Sir George Everest House, spread over a cliff overlooking the Doon valley. While the house has long suffered from a state of utter neglect and the contributions, in writing, of the romantically inclined, it has finally caught the fancy of the powers that be and, in the years to come, should be restored to its former glory. Meanwhile, it was the Endeavour’s turn to entertain and it did, by doing all sorts of unruly things while keeping us absolutely snug over the vast expanse of land that lines the former home of the man who discovered Mount Everest – much to the delight of the locals, we should mention. While there is a lot more you can do in Mussoorie, such as bump into all of your fellow Greater Noida neighbours down the Mall Road, for instance, its real beauty lies in whatever little is left of the peace and quiet. The magic of the mountains may have faded, but it is certainly a long way from over. Fortunately, we had another night’s rest at the Rokeby to look forward to – away from the noise and in the lap of an era that will establish itself as an eternal chapter of Indian folklore. As the last of our teacups clinked into their saucers, this journey back in time came to a standstill. Sunrise would see us traverse through time, metaphorically more than literally, but with the Endeavour to lead us on, we knew the next extraordinary journey was only a weekend away.