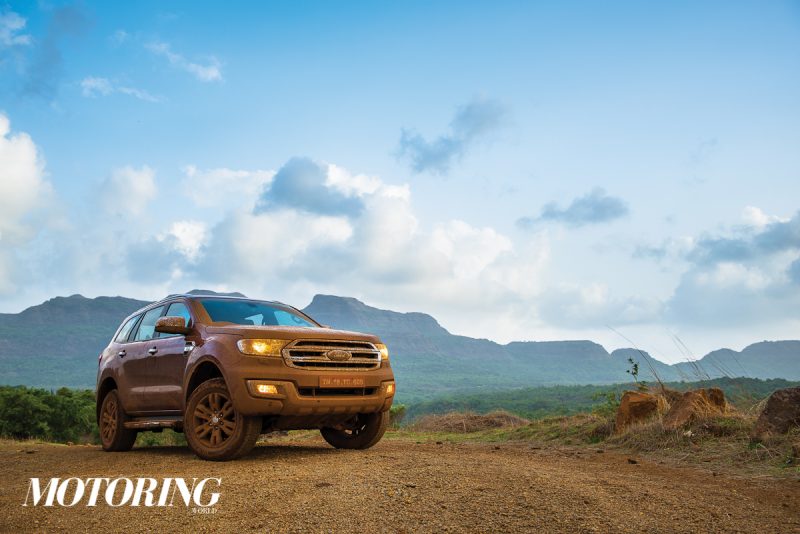 Success, survival, hope and despair – that’s what life in Mumbai is all about. It’s the city of dreams and of dreamers, winners and losers. It’s a city that can’t do without the very people who burden it – a tragic comedy, in a way. To its many inhabitants, survival itself is a form of success and then there are those for whom success is an endless conquest. It’s for extraordinary people like the latter that success isn’t a peak, but a speck in the horizon. It’s like a chase that keeps them pushing the limits – their own, most of the time. And that, coincidentally, is exactly what the Ford Endeavour is like. It’s this insatiable hunger for pushing the boundaries that has brought us here, to 19 Degree North. Set within one of the many spectacular valleys of the monsoon-haven that Lonavala is, 19 Degree North is the wild side of Aamby Valley City, a self-sufficient luxury township for the nation’s affluent. In essence, 19 Degree North is a scenic retreat for those with an adventurous bent of mind, and tucked away in its backyard is an extremely unforgiving forest trail, which is what the Endeavour is raring to venture into. So be it.

That the Endeavour is mighty powerful is old news – with that massive 3.2-litre turbo-diesel motor, it’s kind of obvious, right? What we haven’t experimented with yet, though, is its ability to hold its own in the wild. Is it too much car for the rough stuff? Is it too plush and road-biased? Or is there another side to it that we haven’t discovered yet? It’s the last bit that seems to be the case, because, as we say this, it has already eaten half the trail for breakfast. We definitely thought it would dominate proceedings in the wild, but what we didn’t know is that the Endeavour is wild itself.

Without a care in the world, the Endeavour kicks up mud and gravel as it lurches forward with the might of its motor. We’re almost feeling sorry for the abundant topography because the Endeavour is only interested in flattening everything in sight. What looks like a mountain from a distance is nothing more than a speed breaker for the Endeavour, and we could really do with getting used to this kind of off-road authority. Its height, ground clearance and sheer power works so fascinatingly as a package, you start getting very silly ideas minutes into driving it. Like scaling Mt Everest with it, for instance. All of this, by the way, is what the Endeavour does purely on the basis of its muscle – we haven’t even gotten to its toys yet. You see, placed alongside the automatic gearshift selector is an array of buttons and a very intuitive Terrain Management System dial that houses a selection of tailor-made off-road functions. From the basic surface selector to getting into the details – low-ratio 4WD and a differential lock – these buttons will excite even the most hardcore of off-roaders amongst you. With the driving mode of choice selected, the Endeavour is basically unstoppable. Except when we want it to stop, that is.

About halfway into the day, the Endeavour is caked in mud and it’s looking even more imposing than when we started out. Its muscular wheels make light work of stomping over any form of terrain and with coil sprung suspension at either end (independent at the front), it also keeps its occupants (us!) in absolute comfort, free to bathe in the glory of the fantastic infotainment unit and the hugely comfortable leather-wrapped seats. Here’s a car that’s large because it has that much to offer and not because marketing terms demand it, something the Endeavour has always been, come to think of it.

Menacing rain clouds are above us now but that does nothing to dampen our spirits. Rain, so far, is only a light drizzle although it has made the so far dusty tracks a bit slushy – challenging, on road-spec tyres. Or so we thought until the Endeavour proved us wrong. By far the most important thing in a good off-road vehicle – more than power, torque and toys – is putting the driver in control and that the Endeavour does with admirable conviction. The steering, brake modulation, driver assists and outward visibility are all so thoughtfully setup, you’d find it hard to believe the Endeavour is still a 7-seater family car you can drive on an everyday basis rather than a serious rally-prepped machine.

It’s well past noon now and what finally did get to us is – you guessed it – hunger! So we’ve trekked back up to the more civilised parts of 19 Degree North and plonked ourselves into welcoming couches at the pleasantly airy restaurant. Being here is particularly enjoyable during the monsoon and the view will make you never want to leave. Well, we’re getting similar ideas as well, but the Endeavour is hungry for more. Our tummies filled with elegant European delicacies downed with rather appetising smoothies, we’re ready to oblige the Endeavour again.

This time, we’re even more comfortable with the way the Endeavour handles the wilderness and so, from the photographer’s point of view, we’re more or less flying through it all. Mercilessly enthusiastic driving results in powerslides you’ve usually only seen in Hollywood action flicks and it won’t hurt to mention that the Endeavour loves getting big air (and landing on all fours, we should add quickly). The best part is, despite the relentless abuse, not an inch of this gigantic Ford is showing signs of wear and that surely is relaxing for those of you who want a car like this so you can go off the beaten path. Another feather in its cap is that because it is so luxurious, even an entire day of off-roading (you can leave your kids to play paintball or indulge in some Zorbing, by the way) didn’t tire us in any way. ‘Impressive’ is a good word to describe it, right?

The sun has finally set and it’s time for us to drive back to the city of dreams. The drive back is a relaxed one, our adrenaline rush being soothed by the plush interior as we make our way through fog and rain into the night. You know, it’s no surprise the Endeavour is so versatile. So far, we’ve driven it up in the hills, amidst golden fields, alongside backwaters and now, right here amidst the wild, and it never once failed to impress. And it definitely has got something to do with the Endeavour’s character. It’s luxurious and comfy, without a doubt, but the reason for its success is down to its willingness to work so hard. Success, for the Endeavour, isn’t about numbers – it’s about venturing into the unknown, overcoming fears and emerging a winner. That’s what it takes to be extraordinary, isn’t it?