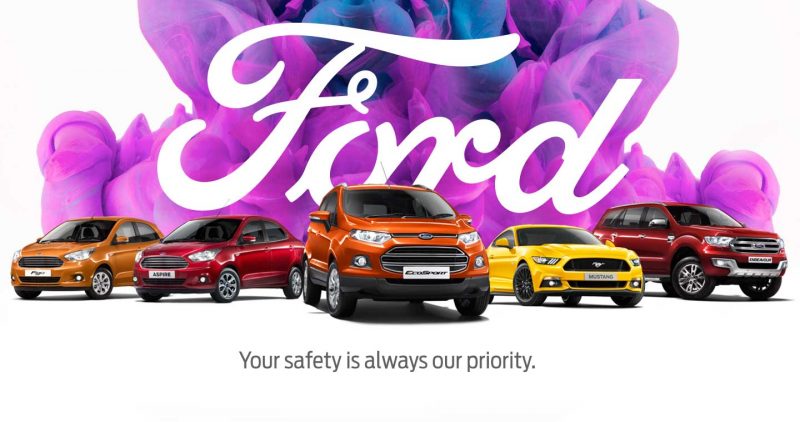 Apart from having a wider range of likeable products, Ford has begun to distinguish itself by timely campaigns regarding them. With aspects like ease of ownership, transparency in servicing and parts’ costs covered already, the carmaker’s latest focusses on safety. The TV advert which premiered last month showcases the same, with a six-airbag-equipped Ford EcoSport and the company’s stance on safety.

And that’s completely understandable considering Ford Inda is one of the very few carmakers to offer up to six airbags in three of their budget offerings: a hatchback (Ford Figo), a compact/sub-four-metre saloon (Figo Aspire), and a compact SUV (EcoSport). Choose the top-spec trim on any of these and you’ll get six airbags, along with standard ABS and EBD. The base versions are more in line with the rest of the market with standard offerings (driver airbag on Figo, dual airbags on the Aspire and EcoSport). Certain variants get Hill Launch Assist, Traction Control, and ESP, too. In addition there’s the customisable MyKey, which lets the owner operate functions like speed limiter, seat-belt reminder, and even cap the audio system’s volume, if they know the car is likely to be driven by someone who might forget about one of these.

The Endeavour continues with the tradition, and offers up to seven airbags, alongside other driver aids. The flagship Mustang, although faltered in the NCAP test, is available in one fully-loaded trim, and thus offers eight airbags (two for driver and passenger knees, as well), among the electronic nannies to ensure that the powerful 5-litre V8 is enjoyed responsibly.

A lot of manufacturers have started to up their safety game, ahead of the BNVSAP, and it won’t be a surprise if Ford turns out to be one of the top performers in the upcoming safety programme. On the other hand, it’s time customers also started to give importance to safety. Because the survey findings (conducted by Ford India, with 22,000 participants) suggest that more than 70 per cent of the customers didn’t consider safety as a vital parameter while choosing their new car. Which is appalling.

So the next time you start looking for a new car, keep safety on top of your priority list.

For now, enjoy the advert: