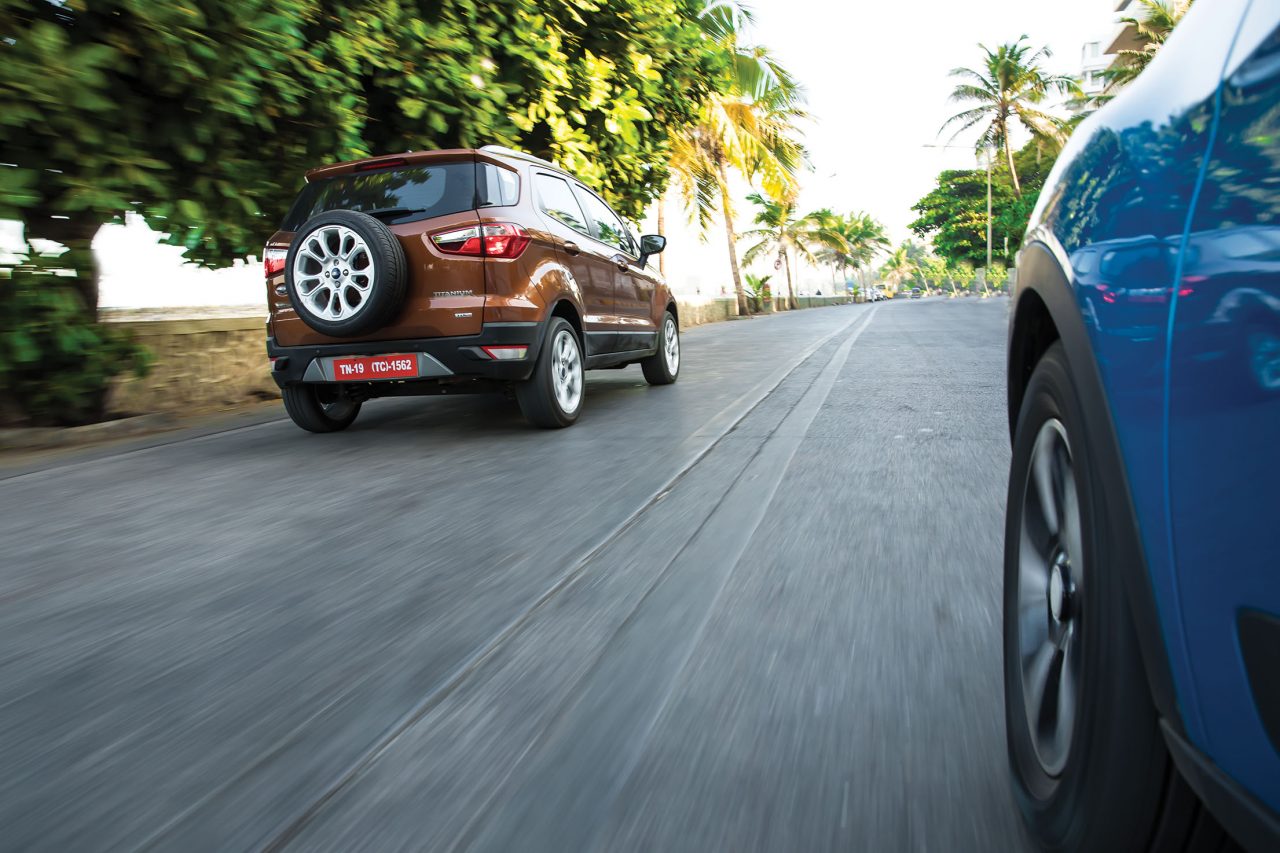 There’s a reason I keep coming back to the Tata Nexon. It’s a simple one: I think it’s one of the best Tatas to come around in a long while, and that’s heartening, to say the least. To see a local coming up with genuinely interesting approaches to the existing norms and giving powerhouses like Ford and Maruti a genuinely tough time is laudable. A few issues ago, I pointed out how the Nexon is, like it or not, something worth looking at when you have the Vitara Brazza parked next to it. It’s not as clear-cut as people make it out to be, really. There’s some honest thought and intent that’s gone into  the Nexon.

And now, the Nexon needs to face another compact SUV in the form of the Ford EcoSport. To say that it needs little introduction would be understating things, but it still has a story to be told, especially after the refresh it’s had. It’s been wrestling with its existence for a while now, but Ford’s given it a decent do-over, so it’s worth seeing how it stacks up next to the Nexon. So without any further delay…

What They Do
If this were a one-on-one with the old EcoSport and the Nexon, there’s no way I’d say that the Nexon’s the better of the two to look at. Now, with the refresh that Ford’s given the EcoSport, well, things are a little different. It’s definitely not as clear-cut as the scenario I mentioned earlier in this paragraph, because they’re both great lookers — for the most part. See, now, I know it’s subjective when it comes to the looks aspect of things, but I’m going to take the liberty of stating what I feel anyway since I have my name on the credit line for this story. 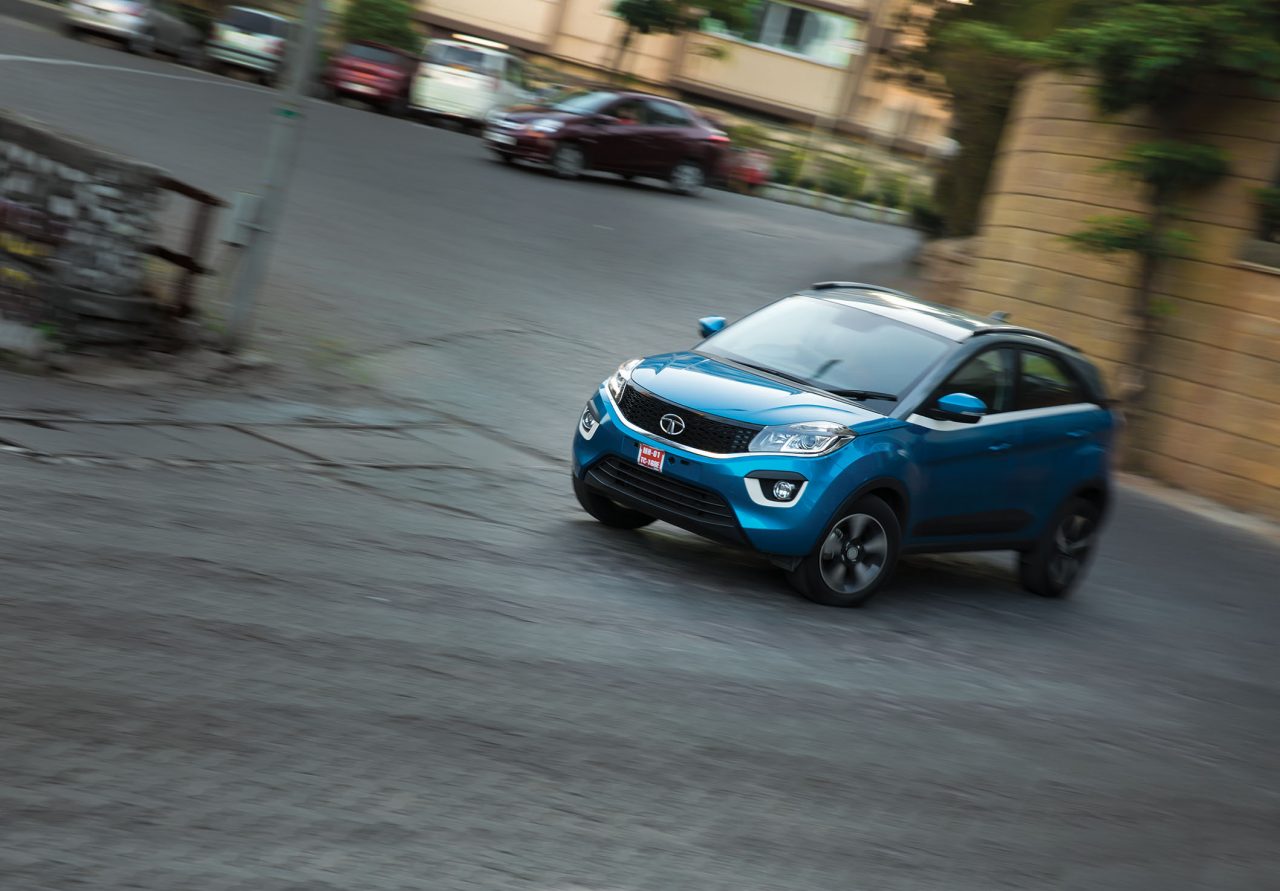 The Nexon is striking, to say the least. Very little out there looks like it, and that’s a good thing. Cars in most segments rely on their ability to stand out to draw in customers. Would I deem it good looking, though? Not quite. The off-white band that runs around the car at the window line looks like an afterthought to me; almost as though Tata was trying to cover something up at the last minute before the car was revealed to the masses. I’m also not a big fan of the way the car looks at you. The front could have been a little more appealing. All the other design cues, however, work. The chunky wheels, the high stance, the neatly enclosed tail-lamps; just the way the car looks like a dramatised version of what a kid in the ‘90s would think SUVs would look like in the future, really. It’s all very neat.

The EcoSport, too, has its fair share of pluses and minuses. The front’s slightly off, in my opinion. The fogs are too prominent, and the fascia just begs for more purpose. Other than that, though, it’s a very well-rounded design. I love the way the wheels look like they’re two sizes too large for the rubber that’s running round them, and little touches like being able to access the hatch from the tail-lamp makes it well worth it. The insides have been through a considerable improvement in terms of kit. 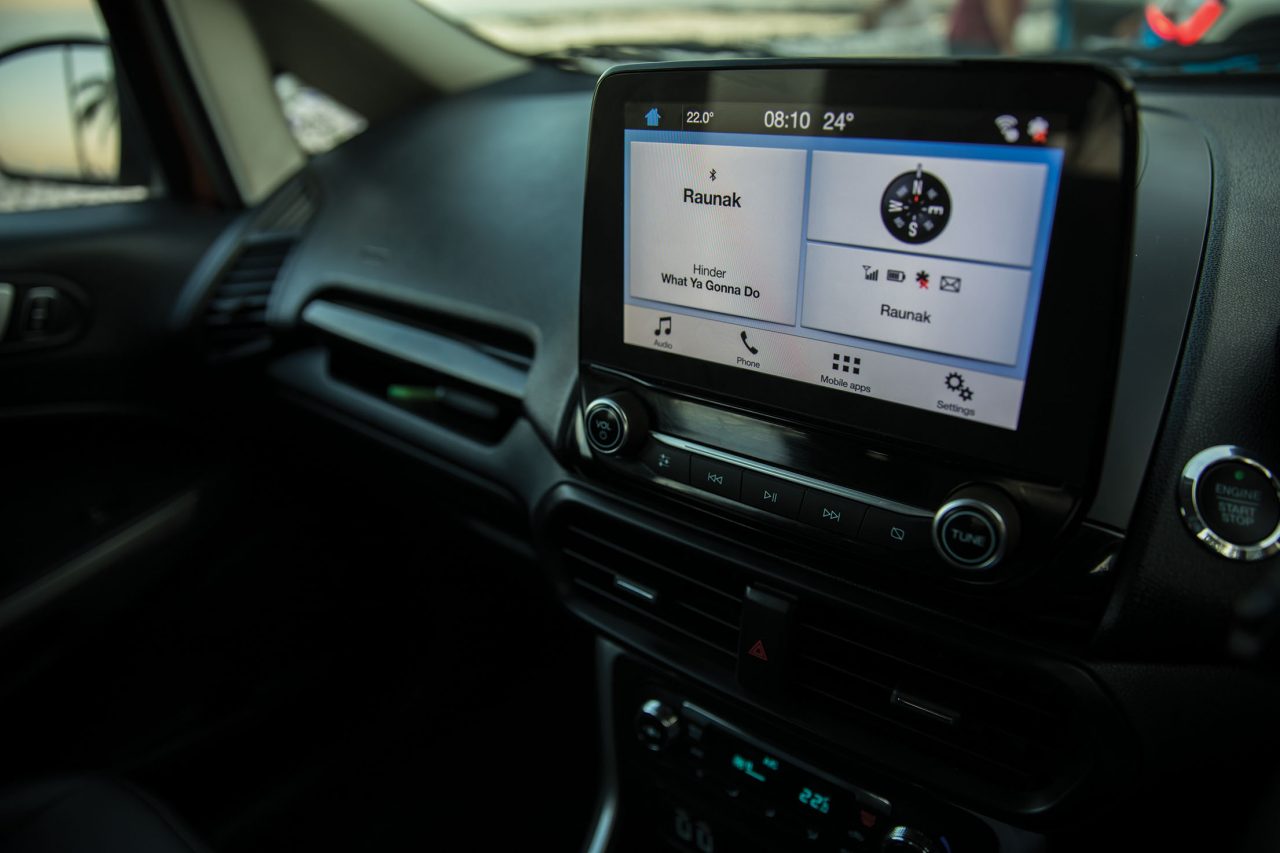 There’s a giant touchscreen that takes up most of the place, front and centre. I like that. You can access all the infotainment from there and the rest of the clocks and buttons all look like they’re proper quality stuff. The seats are comfortable for long distances and have enough bolstering as long as you’re not doing anything rough or trying to corner the heck out of it. Even the boot’s quite sizeable. You can squeeze in a good afternoon’s worth of shopping in there and make sure that there’s plenty of space left over for a travel bag or two. 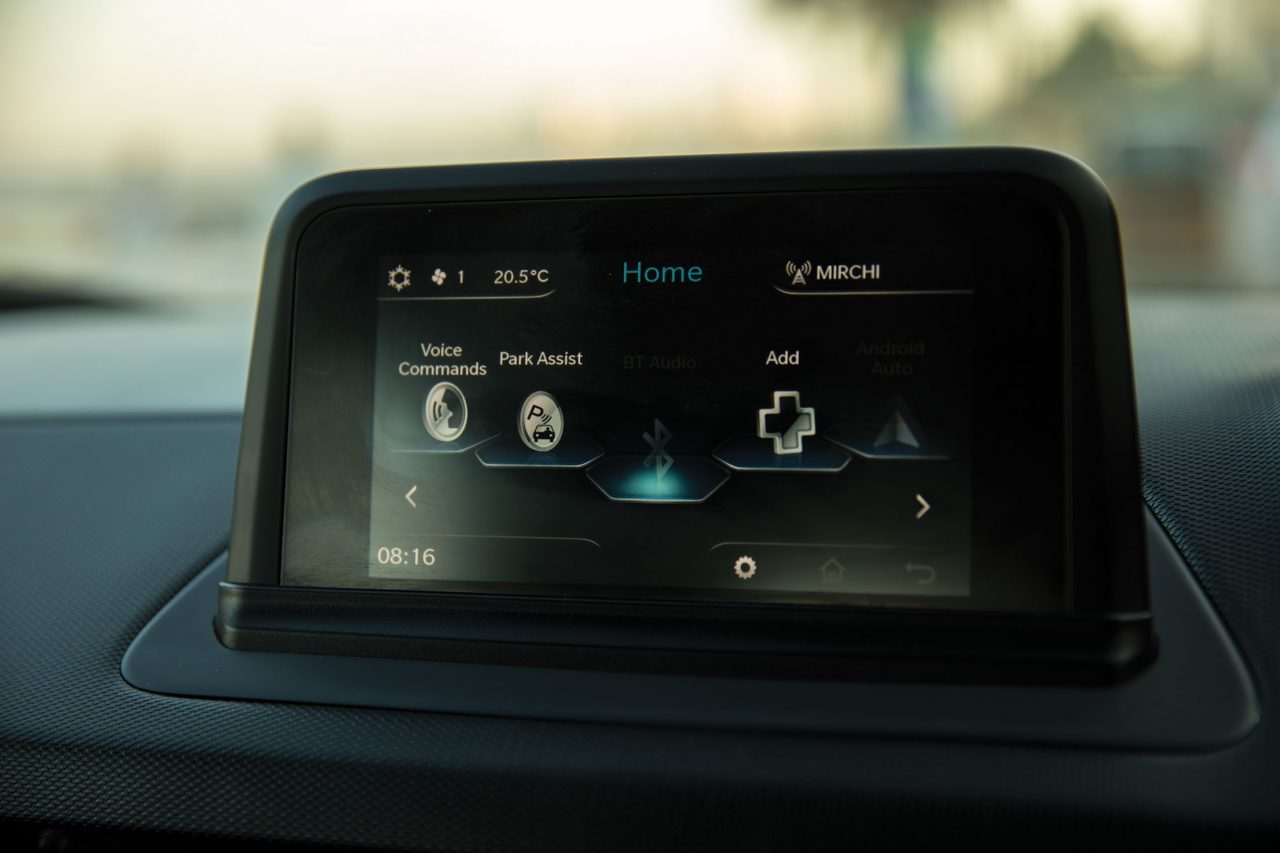 The Nexon’s insides, too, are a very nice place to be in. There’s no giant touchscreen here, though. Just a regular-sized one, but it gets the job done, too. Everything’s been made rather well, so there’s no complaints on quality. The seats are well-cushioned, the boot’s large enough, and you could easily do a long-ish distance without your occupants and you constantly requiring breaks. That’s a big one right there. Overall, then, I’d say the score’s pretty even between the two when it comes to the cabins.

How They Do It
The Nexon and the EcoSport in this story are both powered by diesels, they both have manual transmissions and they both have engines that are smaller than 1500cc. That’s about where the similarities end, though, thankfully, because that just gives me more to talk about. I’ll start with the Nexon. Its 1497cc engine with four cylinders manages to crank out 108 bhp and a none-too-shabby 26.5 kgm, which comes in very handy when you’re in traffic. There’s a certain ease with which you know you can get the best out of it as long as you’re at the right point in the rev range. It’s not like it’s useless below; far from it, in fact. It’s just that you need to pile in a few revs before it really does what you need. Understandably, this makes it a lot better on the highway, where there’s an ample spread of torque in case you ever want to make an overtake in a huff.

The EcoSport, however, does an even better job of it. Its 1498cc inline-four makes 99 bhp and 20.9 kgm, which may be less than the Nexon, but it sure doesn’t feel like it. The numbers might not support it, but the EcoSport feels a lot more sprightly than the Nexon. It’s always on its feet, ready to give you a leg up when you need it the most. The 1.5-litre TDCi diesel makes city and highway commutes an absolute peach. It may not be the fastest, but in this kind of car, that’s not actually what matters. What does is its tractability and its refinement, and the Ford has that in spades. There’s a 5-speed manual to help put all that power down to the front wheels, which is one cog shy of the Nexon’s six, but that doesn’t really stop the EcoSport from being the better long distance cruiser. Put it down to the way the engine’s been tuned or the right ratios for the gears, the EcoSport just manages the drivetrain aspect of it better than the Nexon. 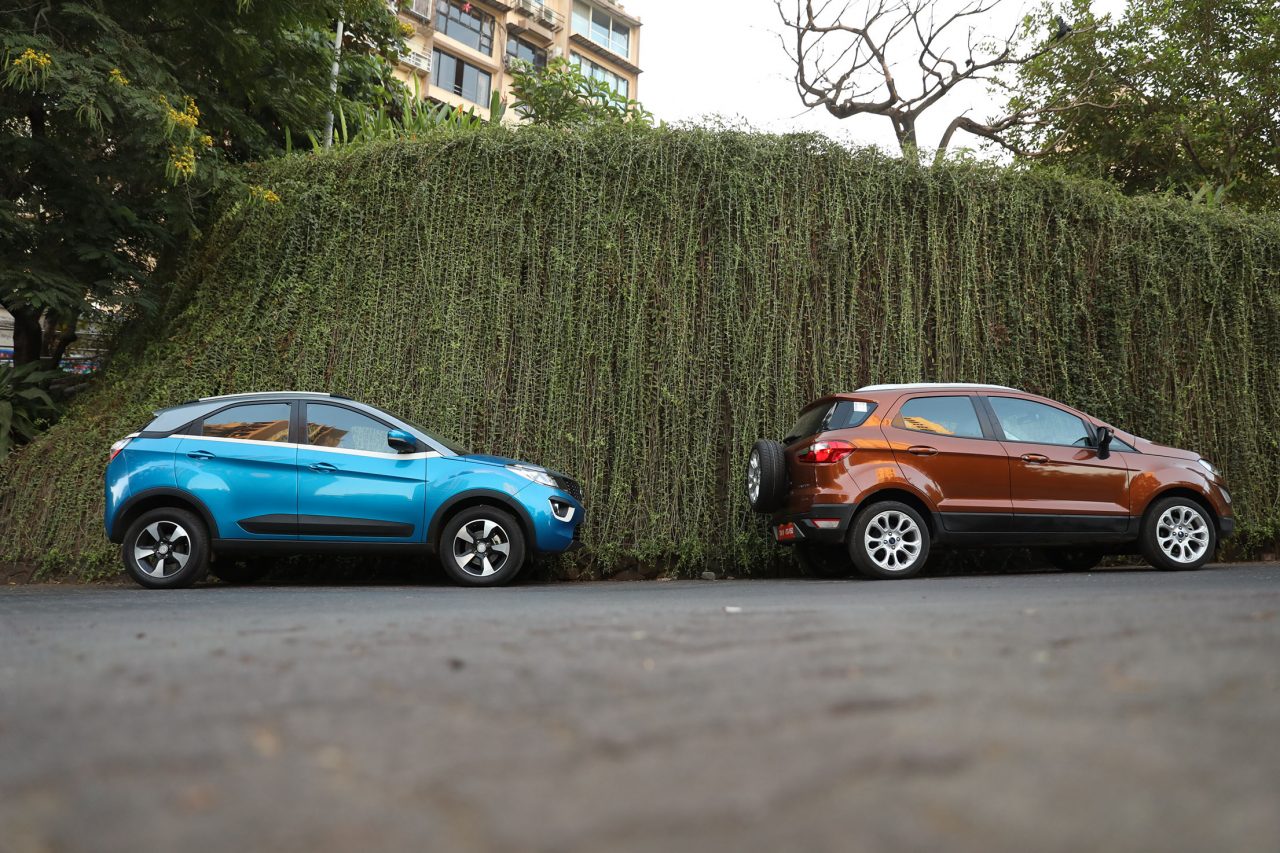 As far as ride and handling go, the Nexon and the EcoSport are both quite able. Low speeds and high speeds are both easy to manage, although if I were to pick one, the EcoSport does manage to eke out a bit of a lead thanks to the fact that it’s slightly more fun to drive overall than the Nexon.

What You Should
(Probably) Do
So what’s it going to be, then? A simple decider based on the price? Not really. Sure, if you have a cursory look at the prices, it’ll show you that the Nexon is a fair bit cheaper, trim to trim. If you think about it, though, what you’re getting with the Ford is just a more complete car. It’s more fun to drive and just as comfortable to be driven in, it has everything the Nexon has and does whatever is asked of it. It’s the kind of car you could be in the long haul for, and that’s a pretty rare thing to say nowadays, going by the rate at which people consume their products. So there you have it. The Nexon’s  good, but the EcoSport’s just that bit better. Now, can someone bring in rally-spec versions of these two? That, I’d watch.