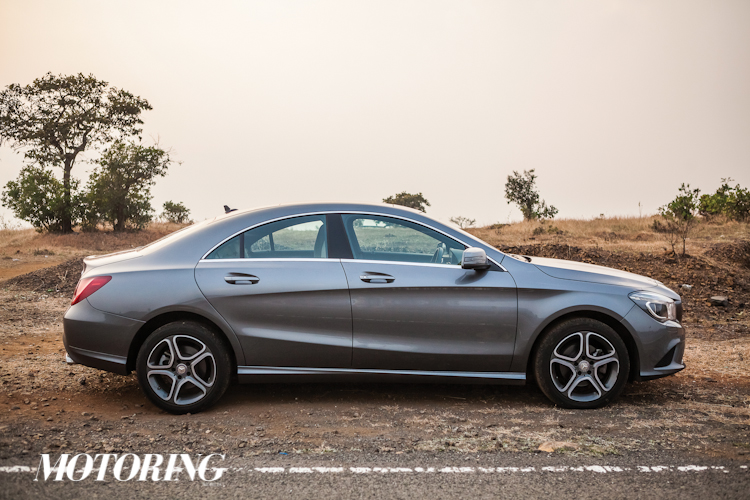 Not too long ago, I’d dragged my photographer along for a music festival that took place in Rajasthan. ‘Are you sure about this? Jodhpur hardly seems like the kind of place that would entertain the kind of music we listen to,’ he suggested. Initially, I was of the same opinion, struggling to imagine the Rajasthan International Folk Festival to be anything but a snooze-fest. I was wrong, of course, as my write-up showed.

Another month down and Mercedes gave us the keys to a CLA to cover a festival once again, but this time around it was for a festival that I’d been to previously; one that I’d absolutely enjoyed myself at. It wouldn’t be a stretch, then, to imagine that it’d be a similar experience to the one we’d had in Jodhpur a few months ago. Once again, I was wrong.

For one, although the car we’d brought along for the journey was a CLA, the cherry red had been swapped out for a grey and the rev-happy petrol made way for a diesel. The way the two drive is worlds apart. Like I said earlier, the petrol loves it when you stretch it to the limiter, and there’s a delightful soundtrack each time you do. The diesel, on the other hand, feels most comfortable when you keep it in the middle of the rev range. This makes it so easy to drive on the highway because cruising is its forte. That’s not to say that it gets unsettled when you speed up a bit, because the 7-speed dual clutch auto more than makes up for any inadequacies in terms of power, but it’s just inherently happier when you’re not in a tearing hurry.

The other bit that was different was the experience of the festival itself. The Enchanted Valley Carnival festival is only in its third year, but it’s accumulated a massive following in that time thanks to a stellar lineup each year, and I also have a feeling that the fact that it allows fest goers the chance to buy tents and camp out at the site itself is a major draw for everyone. This year, for instance, there was around half an acre dedicated to the camp site! And it was pretty easy to see why: headlining the festival were artists like Tiesto, Fatboy Slim and Ferry Corsten, which drew in a massive amount of people from pretty much everywhere.

Our first day there was a bit confusing, if I’m honest. The tickets instructed us to be there by 4 pm, after which entry wouldn’t be entertained, but when we reached there was hardly a soul around except for the management crew. What’s more, the EVC festival takes place on a flat expanse of land set high up in the mountains, so we weren’t too successful in finding a place that would allow us to show-off the car a bit more for these pages, so pardon that. Aside from that, there was still a lot about the festival that seemed to not be ready yet. The hot air balloon rides, for one, and the wildlife exploration safari that was set up by Polaris for another. We decided to give them the benefit of the doubt, though, and figured it’s only a matter of time. I wasn’t wrong this time.

In a few hours, the place was more tightly packed than the blocks in a game of Jenga. As the sun set, it got harder to differentiate the people in front of you because the entire arena was set in darkness, except for the five stages, of course. The way these stages had been set up was incredible. Three of them were side by side with a few hundred feet between them, while two others were set at the far end of the festival ground. What I liked about the festival was that the crowd wasn’t unruly and out of control; the music wasn’t overtly annoying and repetitive as it tends to be at these kind of festivals, and the management had absolutely nailed it in terms of spacing everything out just right and making everything accessible.

For reasons that shall remain undisclosed, we were unable to get a tent for ourselves and camp out for the night with the rest of the 1000-odd people. If you’re wondering, one of the reasons the organisers give ticket holders the option of camping out is because the festival is held in Amby Valley. More specifically, it’s held on a sort of mountain edge and finding affordable accommodation around that area isn’t the easiest thing to do. A big plus is that you get a gorgeous view of hills all around and you, and there’s also the temptation of some pristine air (this one’s aimed at the folks from Delhi mainly). Alternatively, you’d have to hike back for around half an hour (by car, mind you) and get into Lonavala to find a decent place to stay at.

That, incidentally, is exactly what my photographer and I did after the day was over, and we didn’t mind all that much, to be honest. I mean, sure, we’d be missing out on a lot of random conversations with strangers, but on the flipside we had a nice set of twisties, smooth tarmac and empty roads to look forward to on our way to the hotel. This is another area the CLA really comes into its own. I’m not saying it was born to set the road alight but there’s a certain confidence it displays when you’re certain of where you’re placing the car. Mind you, the car doesn’t get Mercedes’ 4MATIC all-wheel drive system – all the power is sent to the front wheels. Even then, there’s rarely a point when you feel like understeer will be the cause of your timely demise. What also helps is that you have a very well-weighted steering wheel to rely on, one that’s as communicative when you’re navigating the aforementioned twisties as it is when you’re pelting down the expressway trying to make up for lost time.

The second (and final) day we attended was more of the same. The acts both of us were really keen on were Marco V, Snow Flakes, GMS, and RAM. The variation in genres between said artists was extreme, but somehow we managed to find an equal amount of people, more or less, at whichever stage we stumbled on to. The day’s acts seemed a lot better than the previous day’s, but that could also be because we were just that bit more familiar with the entire scene.

At the end of the day, when the sun began to set, two things became abundantly clear to me. When it comes to international artists, there’s no dearth of fans here in India, regardless of how obscure the location is. And festivals like EVC, and even the Rajasthan International Folk Festival I went to a few months ago, are doing such a stellar job when it comes to organising and bringing down artists we could only dream of watching only a few years ago. The other bit was that no matter where you are, no matter the kind of people there and their profile, if you’re in a CLA, you can forget about getting by without being noticed. On at least five occasions along the way, I was asked some of the most random and inane questions about the car. From its swooping lines to the gorgeous alloys, and right up to the way the tail-lights light up in the night and grab attention like little else on the road, the CLA screams its presence in case anyone is foolish enough to not notice it. At one point, we even had a policeman pull us over, and when I proceeded to whip out my license, he held up his hand and only asked me how much the car costs. And just like that, we were on our way. It’s funny what a car can do for your image…