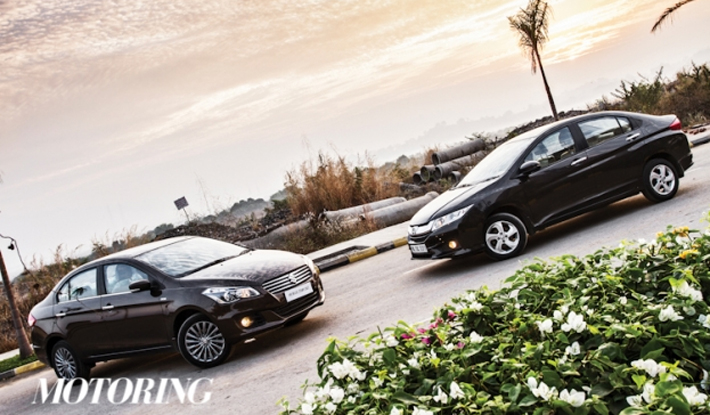 The City has always ruled its segment, except for the one blip where Honda didn’t have a diesel engine to cope with the sudden deregulation of petrol prices. It also won our last comparison in the November 2014 issue. The Ciaz is what Maruti has brought into the fray, in the hopes of hitting the high notes cleanly and dethroning the City. Will it be up to the task?

Skin deep
Both sedans subscribe to Japanese schools of design, but they couldn’t be more different. The City looks like it was designed by a ninja and his katana, whereas the Ciaz looks more inspired by nihon teien, the art of Japanese garden design — but it also has a few sharp elements, which make it look a little confused. There’s chrome on both grilles, but that’s where the similarities end. Maruti has opted for subtlety with three chrome strips, while Honda has all but covered the City’s grille with a bar of chrome.

The Ciaz offers a more premium outlook with projector headlamps, but the City gets back with sharp double-barrel conventional units. It’s the same on the rest of the cars — you can have either the Ciaz’s blade-like multispoke wheels or the City’s directional five-spoke design… until you get to the rear. Both cars’ rears look like they were designed by the same man on the same day. Badging at the top, chrome strip that connects tail-lamps that BMW would be proud of, number plate recess in the middle of the boot lid, and bumpers with reflectors low down. The only real difference here is the positioning of the turn signal lamps. Overall, the City still remains the most cohesive design in the segment, and edges out the Ciaz because of it.

Inside out
The City has a reputation for possessing the most futuristic interior among its peers, and this generation is no exception. The steering wheel is reminiscent of the Civic’s wheel and has buttons on it for the audio system, telephone and cruise control. The instrument cluster has cool blue backlighting and green lights that turn on when you’re driving efficiently, in addition to a host of other information available on the digital readout. It also has a colour screen for the audio that also doubles up as a feed for the reverse camera that is an integrated part of the centre console. Below this is the section for the climate control, which is a capacitive touchscreen — a first in the segment. This has neat tricks up its sleeve, like swipe to turn the blower to full speed or minimum temperature.

The Ciaz opts for a more traditional layout — two big dials with a central, digital multi-function display. It isn’t exciting like the City’s cluster, but there is a certain elegance to it that cannot be ignored. The steering wheel has the same controls as the City but misses out on cruise control. The centre console gets a white-text-on-black-background font and traditional button-and-dial operated climate control controls. The backlighting also feels a little last-gen, with a combination of amber and white lighting.

In a twist of fate, it’s the premium-branded Honda that doesn’t feel as well put-together on the inside. The plastics are harder, shinier and are more prone to rattles.

The Suzuki may feel very last-gen, but it feels more upmarket because of the quality of all the surfaces that one touches — the steering wheel, the knobs and buttons for the air-con and stereo system, everything. The one thing that doesn’t sound premium is the noise the indicator stalk makes when you switch from high beam to low. Other than that, it’s the Ciaz that feels the better car. The Honda gets back with rear leg-room that is the best in the segment, but the higher refinement levels of the Ciaz’s interior ensure that that’s the cabin we want to be in all the time. Both cars offer ABS and two airbags on the top-spec versions, although since the Ciaz is a new car it has yet to go through the ASEAN NCAP crash test program like the City already has. The Honda acquired a four-star rating primarily because of the absence of ESP.

The heart of the matter
Both marques use a single respective diesel engine across their Indian range of vehicles, and here is where they are expected to deliver the most. The City has Honda’s 1498cc i-DTEC diesel that generates 99 bhp and 20.4 kgm mated to a 6-speed manual gearbox. This engine is a very flexible unit, pulling strongly from low revs across the rev range. Unlike the Honda petrol engines we’ve encountered so far, there is no top-end zing to it, and the best way of extracting performance from it is to ride the torque curve. The sixth speed helps to boost economy on the highway — if you use a light foot, the car indicates you’re driving efficiently even at speeds like 120 kph, which is astounding.
The Ciaz uses the familiar 1248cc MultiJet that has been doing duty in Maruti Suzukis for years. In the Ciaz, it puts out 89 bhp and an identical 20.4 kgm of torque. It is also rated slightly higher than the City’s ARAI fuel efficiency figure of 25.1 kpl, at 26.2 kpl. All this despite the mere 5-speed gearbox. The Ciaz doesn’t have much of a weight advantage, at 60 kg less than the City, but pull away from rest and it certainly feels more than that. Despite the lack of a sixth speed and a deficit of 200cc, the Ciaz leaps forth with minimal throttle input, where the City takes a more mature approach to the instructions from your right foot. There is minimal lag in both cars; again, this is pleasantly surprising in the Ciaz because the SX4 had quite a lot of it. Gearshifts on both cars are short and positive, and both motors are willing to rev, but the Suzuki has a willingness to play that is sadly absent from the City.

Driving them around the bend Like the engine, the Ciaz exhibits an enthusiasm for corners that is pleasantly surprising. It helps that the steering wheel is great to hold, and offers good feedback, and the brakes have good bite, progression and feel. If you’re buying your mid-size sedan to drive, look no further than the Ciaz. Up until the previous generation, the City used to be one of the default picks for the driving enthusiast, but the current generation focuses squarely on the rear seat, and the ride is tuned for the commute rather than haring around a corner. As a result, the City wallows at high speed and gets out of shape fairly easily when presented with a mid-corner bump, but the Ciaz holds its line well, telling you what is happening all the way through.

Which C shall it be? The City has a ton of features and greater rear seat space. It also has the most cohesive looks and the brand value that only Honda enjoys in India. That said, it costs approximately ` 1 lakh more than the equivalent Ciaz, which doesn’t have as many toys, but what it does have is quality where it matters — in the places that occupants will touch, and in the much better NVH. There’s also the small matter of it being such fun to drive — the head might have to take time to decide which C is higher, but the heart knows that the Ciaz is the one.