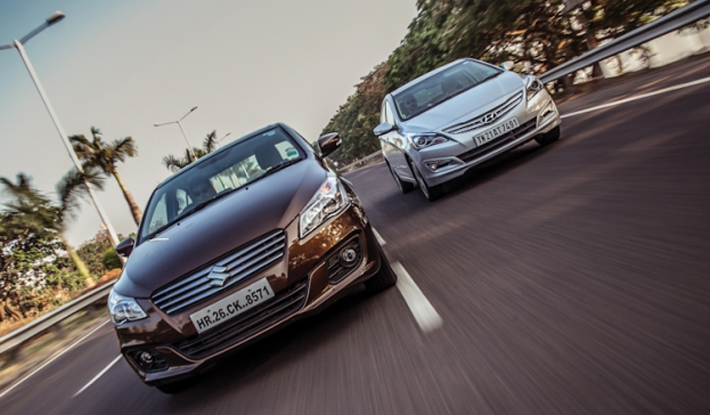 The last time we got mid-size sedans together, the Ciaz showed us how much better it is in most ways over the competition, and it walked off with a victory. But Hyundai has been listening to its customers and they’ve been improving their products steadily. The Verna was the recipient of new suspension settings for the 2014 model year, and this year they’ve made it even stiffer — but is it better?

The City is the oldest design of the three here, but you wouldn’t know it. It still looks like someone from Honda time-travelled to the future and brought back the face of the City. And it still looks like someone travelled to Munich to bring back the rear of the car. But let me quickly state that Maruti went on vacation to the exact same place as Honda, and the rear of both the Ciaz and City look so similar that it looks like they drew inspiration from the same things. The front of the Ciaz looks so different from the City even though it still is Japanese. Just like the City draws inspiration from the FCX Clarity, the Ciaz also draws upon its elder brethren for its face: in this case, the Kizashi. The Ciaz brings that eloquence of design to its segment.

The Verna has gone under the knife yet again, and Hyundai has managed to take the Verna’s design to the next level. There’s projector headlamps, a twin-slat grille and two new longitudinal creases on the bonnet that give it a newfound aggression. At the back, Hyundai has updated the tail-lamps to resemble LED ones (at least, according to it) and in a move that will alienate all drainpipe-exhaust-tip lovers, it has concealed the exhaust tip completely. On the first drive, I didn’t like the new face very much, because it looked very busy, but the silver paint reduces the effect of all the lines, including the twin horizontal chrome strips that the grille has become, and as a result the ‘Sonata’ effect was quite enhanced. If you’re going to get a 4S Verna, get one in colours that will not emphasise the new lines, like silver.

The City was the first of the three to ape the Nissan Sunny and offer massive rear legroom. It retained the lessons of the previous-gen City, offering a flat floor at the rear as well. The dials are the most colourful of the lot, with deep blue LEDs competing with white fonts, red and amber warning lamps and green lights that switch on if you’re driving efficiently. It is a well laid out cluster, with the speedo and rev counter the only two analogue dials. The steering wheel has a number of buttons on it, and cruise control is offered as well. The seats are comfortable, but the rear could use a little more under-thigh support.

The City’s party trick remains the capacitive touchscreen for the climate-control system. It takes a little getting used to, but it works. The colour screen for the audio head unit isn’t a touchscreen, but is operated with the buttons and dials around it. The NVH levels inside the City’s cabin are just about acceptable, but in present company, it ranks dead last. No vibrations from the engine enter the cabin, but the constant gravelly drone of the diesel is something that is very un-Honda.

In the Ciaz, everything is well laid out and the interior is quite minimal. Suzuki seems to have gone for quality over quantity; a few years ago, we would have mistaken the Ciaz for a European product, what with its focus on tactility and feel rather than features. The instrument cluster has only white lighting, and symmetric analogue dials. The multi-function display sits at the top in the centre and has the same no-nonsense layout as the rest of the cluster. There is climate control and a rear blower, and the audio system is not a colour screen, although it has all the functions the Honda has. Maruti has since launched a ‘Plus’ variant with a touchscreen unit that includes SatNav, catapulting it into the lead as far as infotainment systems go among these three. The rear seat has a little less perceived place than the City, but that doesn’t make it any less comfortable. If anything, the rear seat of the Ciaz is slightly more comfortable than the City for tall people, thanks to the extra under-thigh support. The interior of the Ciaz will appeal to a more mature mindset — the uncluttered design focusses on quality over all else, and that reflects in the cabin NVH. The outside world is kept at bay, and we don’t mean just the engine noise and vibrations. Shut the door and you feel like you’re in car a class above.

The Verna has the newest exteriors of the lot, but it also has the oldest interiors. When launched it was a wondrous new swoopy design, and it hasn’t lost its charm, but we’ve gotten a little too used to seeing the Verna’s interiors now. Nevertheless, it remains one of the more practical interiors in the segment. The instrument cluster opts for cool blue backlighting with white fonts and needles. The rear seat, although sufficient for a regular-sized person, has the least legroom and headroom among the three. Hyundai has introduced an ‘ergo lever’ in the Verna, with which the rear passengers can adjust the backrest inclination of the front passenger for more knee room.

Here’s where there are the most differences: the smallest engine is in the Ciaz, which chooses the trusty 1.3-litre Fiat Multijet with a 5-speed manual gearbox. Predictably, it makes the least amount of power, at 89 bhp. Torque, though, is equivalent to the Honda’s 1.5-litre iDTEC engine, at 20.4 kgm. The Honda makes 99 bhp, but through a 6-speed manual gearbox, just like the Hyundai. The Hyundai, with its 1.6-litre displacement, offers 26.5 kgm, which isn’t a very big leap ahead of the other two, but the power figure stands at 126 bhp. In a drag race, the Hyundai will race ahead to 100 kph in 10.54 seconds and the Ciaz will follow, with a gearbox with one less speed, in 12.8 seconds. The City was the most fuel-efficient car in the market when it went on sale, and the tradeoff is the slowest time to 100 kph at 13.7 seconds.

The Honda is the only one without a variable geometry turbo, yet it has the best spread of torque among the three. That’s not to say the others are bad; the Ciaz has immense mid-range shove that belies its small displacement, and the Verna takes off like a scalded cat when on boost, but the turbo lag on these two is quite pronounced compared to the City. That said, there is no joy in giving the Honda motor the beans; it won’t complain, but the zing that a Honda petrol motor has is missing. The Suzuki and Hyundai, meanwhile, enjoy every last rev to the redline.

We come, finally, to the real reason for this review — the updated suspension of the Hyundai Verna. 2014 was a quantum leap in terms of suspension settings, while this time around it is an incremental change. It has gotten even stiffer than the 2014 year model, and yes, it is the better for it. The steering feel has also gotten better, which means that at the high speeds the Verna is capable of, there finally is confidence. Given the road, you can spend all day at triple-digit speeds with the 2015 Verna and not be bothered by a crosswind or even a bump in a high-speed corner. The ride at the rear still needs to be fine tuned, however, but that isn’t a deal breaker, because it is a very similar case with the City.

Besides the suspension, the low-friction, fuel-efficiency-focussed tyres shoulder a lot of the responsibility for the way the Honda feels on the limit — which is to say, not the best. In fact, the light weight of the Ciaz coupled with the just-so suspension makes it the best riding and handling car here, at anything but the lowest speeds. It is a car that any of us would gladly take for a long drive or a blast through a mountain road.

The City has long been the segment leader — still is, as a matter of fact, if you’re counting numbers, and with good reason. It is a very reliable car and will do everything it says on the label. It has the most toys on the inside as well. However, at Rs 11.84 lakh, ex-Delhi, it is the most expensive here. The Hyundai looks the freshest of the three, but the interior is showing its age, with the absence of a colour audio head unit screen and a rear AC blower. That said, it has the others licked in straight-line performance and refinement from the driveline. It costs Rs 11.39 lakh, which is less than the City — given the excise norms, that’s quite a bargain. However, at Rs 10.32 lakhs, the Ciaz still manages to steal our hearts with its looks, pseudo-Euro interior and eagerness to play on a twisty bit of tarmac. The fact that it is the least expensive of the lot is just the icing on the cake.