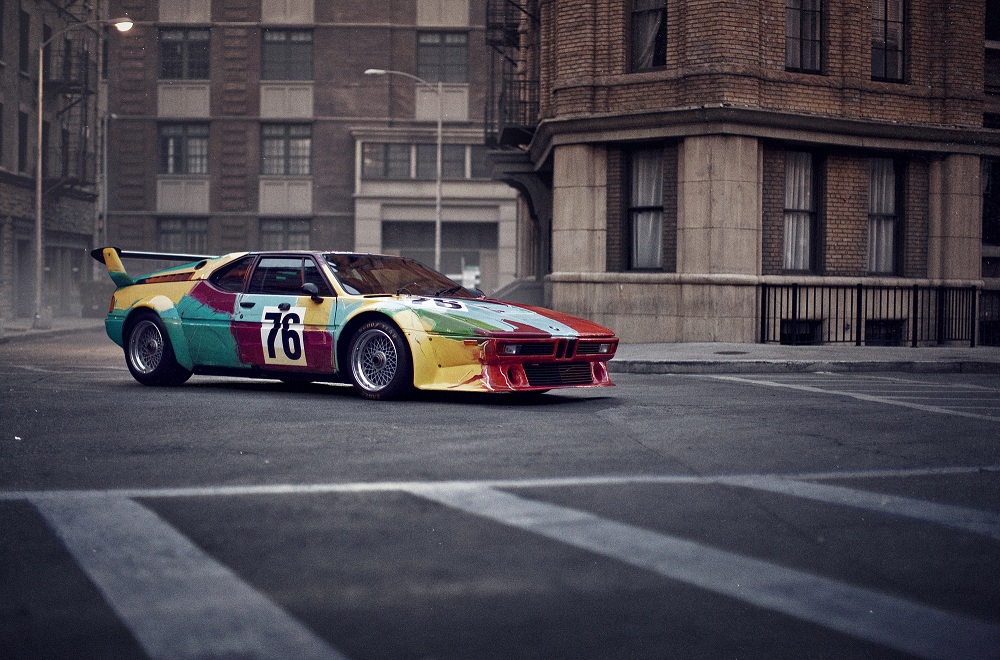 Here’s an interesting story: In 1979, BMW was looking to create some noise about their ‘Art Car Project’. They were looking for an artist, to paint over a BMW — like the three artists who had already done so, at that point — but they wanted to make sure that this time, it made news in the artistic circles. And as it turned out, they managed to rope in Andy Warhol to paint the fourth BMW Art Car.

Warhol’s BMW M1 is arguably the most famous of all those wildly painted BMWs. Which is not surprising, considering Warhol could paint rows of identical soup cans (something which he actually did!), and they would become objects of high praise, mystique, artistic benchmark and much debate. Don’t believe me? Do a spot of Google-ing on Andy Warhol’s 1962 ‘Campbell’s Soup Cans’, a painting worth tens of millions of dollars today.

His first movie, called ‘Sleep’, was a five hour long movie of his roommate sleeping. Which, although caused a lot of furrowed eye-brows and had befuddled critics back then, today, it is hailed as revolutionary.

Honestly, this makes Warhol sound a bit loopey, which he definitely wasn’t. Or maybe he was, but his creative output, in whichever form it was, is looked back upon in same way as say an automobile enthusiast would look back upon Marcello Gandini. Or Alejandro DeTomaso. Or John Britton.

But I digress, back to the story. When it was time for Warhol to paint the BMW, he, in his own inimitable way, wanted to do things a bit differently. Unlike the other artists before him, he rejected the offer of a smaller scale model for him to practice on, and pretty much laughed off the time-frame of a couple of weeks, which was given to him. In fact, what is not commonly known, is that most of the actual BMW Art Cars are not physically worked upon by the respective artists. Instead, they would create a very beautifully painted scale model (over a couple of weeks), and then other, regular painters, would replicate it on the actual car. That was definitely not going to fly with Mr Warhol.

Legend has it, that all he did, was take buckets of paint and throw them over his head, backwards, while being blindfolded. While others say that he requested that he be left undisturbed with the car in an empty studio, and then proceeded to stayed there for days. Officially, according to BMW though, he did nothing of that sort, but finished painting the M1 in just 23 minutes. The official account also did say that after he finished painting it, he ran his fingers through the paint, add a tinge of imperfection to it, which is easy to believe because that is a trait found in many of his other paintings. In his own words ‘I tried to portray speed pictorially. If a car is moving really quickly, all the lines and colors are blurred’

Although the famous Andy Warhol bought a lot of attention to the BMW Art Car Project with the M1, the origin of this entire initiative wasn’t a company-led one.

A couple of years back, a French private racing driver, by the name of Herve Poulain, wanted to compete in the Le Mans. The world was in the throes of a crippling oil-crisis in the early 70s, so Poulain wanted to bring a bit of levity to the starting grid, by coming up with the idea of letting an artist paint over a racing car. The first artist to paint a BMW Art Car was the American, Alexander Calder, who Poulain knew personally, and had already convinced him to do this project before he had even finalized on a race team and car. After conferring with his fellow racer Jean Todt (yes, that same one), he approached BMW with the idea, and managed to get it approved, with BMW offering him a 3.0 CSL ‘Batmobile’ to paint and race with. Alexander’s use of bright colours, and geometric shapes on that BMW 3.0 CSL is iconic today, but it actually didn’t do all that well in the race, with the car retiring with a broken prop-shaft.

Later, when Warhol’s M1 was ready, Herve Poulain returned to the Le Mans in 1979, driving that M1, and finished second-in-class, and sixth overall. Very conveniently, Warhol had painted some extra panels and bumpers when he was working on the car, which were used to replace the panels which were damaged during the race.

The BMW Art Car Project has now spanned three decades, with the latest, the 17th car, painted in 2010, by Jeff Koons. His canvas was a E92 M3 GT2 race-car, and, like the first one, was meant to compete in the Le Mans. His M3 GT2, with their stripes of bright colors portraying speed, would have definitely have been appreciated by Calder and Warhol.

But not all BMW Art Cars were destined racing, and some weren’t even production cars. Italian painter Sandro Chia worked upon a racing prototype of an E36 Coupe, while Olafur Eliasson did not even paint on the BMW H2R concept given to him, but instead replaced the exterior surface with sculpted metal, like an exoskeleton. Also, not all of them were fire-breathing race cars or sports cars, with Japanese artist Matazo Kayama working on a E28 535i, while Spanish artist Cesar Manrique came up with a psychedelically painted 730i.

It is also fascinating to see the variation of the art created, with not all of them coming up with swashbuckling colors portraying speed. Some are quite minimalist, like Jenny Holzer, who decided to just cover up the BMW V12 LMR racecar with words. Among them there is this one line which says, ‘Lack of charisma can be fatal’. While that makes sense when you read the rest of the text, charisma is something the V12 LMR hardly lacks. But I do agree that that the LMR can be quite fatal, in the wrong hands.

Some are a bit technically-bent, with David Hockney opting to paint his 850CSi in a way as if the body panels are transparent, with David painting the innards of the car, outside — drawing a person driving the car, with even a dog sitting in his backseat.

Like David, Frank Stella was also enamored by the technical progress that BMWs were associated with, so his 3.0 CSL is painted with grid-lines on the outside, mimicking a blueprint, or a technical drawing.

On the flip side, when A.R. Penck was asked to paint the Z1, the one in which the doors slid down; he decided the car already was a symbol of the future and so, satirically, he painted a caveman, in a cave. Together with a lion and crocodile on one side.

Among the more odder ones, was Ernst Fuchs’ work, which, although looked perfectly agreeable – that of a 635Si covered in flames – but his interpretation of it was the odd part. He said that the symbolism was of a hare running across a motorway at night and then jumping over a burning car. Speaking about animals, can you guess what happened when BMW handed over a E30 Group A racecar to Australian artist M.J Nelson? Yes, you are correct. They got back a car with kangaroos, and emus painted on it, with the inspiration of the art coming from the Australian outback and tribal art.

Outside the officially commissioned ones, there are few unofficial Art Cars, including a M1 which was painted by Frank Stella, who already had officially painted a BMW 3.0 CSL before.

From the eyes of an automobile enthusiast, the BMW Art Car Project is something ‘cool’, but if you think about it, it is so much more than rare BMWs with interesting paint jobs. I probably know as much about art as the chair I am sitting on, therefore, I do not know of any other privately commissioned art project which has bought together painters and artists from so many different countries, from different decades and from different schools of art. Even if there are or were other such projects, these BMW art cars will probably still be unique, because I would hazard a guess that they weren’t asked to paint cars often. And did that make the art on these cars, something unique too, even for that particular artist?

Which makes these cars truly invaluable, from a financial, artistic and cultural point.