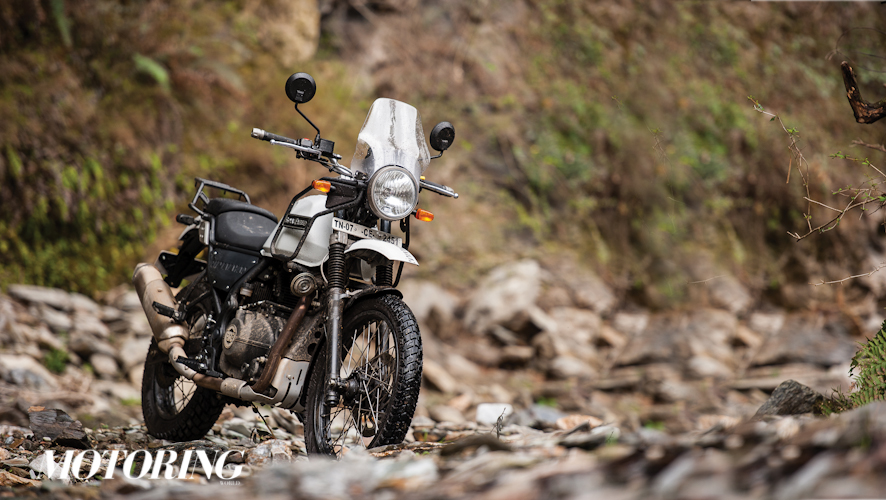 The essence of Tibetan chants is often misconstrued. The chants, essentially teachings through simplistic poetry, are simply a preparation for meditation, but not meditation itself. It’s the music, the celestial fluidity of the gyaling and the thunderous echo of the lag-na that takes you into a space commonly referred to as meditation. Tibetan music is powerful but unintrusive. It blends in and takes you on a journey into the calm, on the most sub-conscious level. It is a state of being rather than doing. It’s transcendental.

The Royal Enfield Himalayan is like that. It looks rugged, built on go-anywhere principles and bears the responsibility of a badge that has, over time, established itself on terrain the Himalayan is specifically designed for. Thus, it goes without saying that a lot is expected of the Himalayan. It has to retain every single aspect of Royal Enfield’s outdoorsy image and still offer something entirely novel. There is a lot riding on its raised fenders and above all, it needs to blend into the Indian motorcyclist’s psyche on a subconscious level. It needs to take you places. Wherever you want, whenever you want.

Roughly two years of research and development went into the making of the Himalayan, with a major chunk of it spent in testing the bike’s real-world performance. From the larger-than-life landscape of the Himalayas to the serpentine confines of the Bruntingthorpe proving ground in the UK, the Himalayan has been subjected to rigorous challenges — like penance, you could say — before it was deemed fit to capture the imagination of the third-world motorcyclist. Is it a perfectly timed call? Or is it too little too late? There is, fortunately, a way to find out. By riding it, that is.

Walk up to the Himalayan with your usual suspicions, mostly related to its lineage, in tow and you’ll have a hard time nitpicking. There just isn’t much to diss. In profile, the Himalayan looks like simply the most functional motorcycle ever built in and for this country and its individual elements echo this, too. The round headlight with its adjustable fly screen, the 21-inch front wheel, the exoskeletal auxiliary fuel tank brace, a two-step saddle, an aftermarket-looking exhaust end-can, the 17-inch rear wheel, the RE-first monoshock and a barren tail section — every imaginable necessity is here, firmly bolted on. Everything that isn’t one has been given a miss.

The idea behind the Himalayan is not that of a dominant adventurer tourer or a scaled-down version of one, either. It’s meant to be a simplistic, all-purpose motorcycle that has nothing do with extremes. This comes across in its specs as well. The all-new 411cc, to begin with, is simple in construction although it is, not to forget, a huge deviation from all other engines in the Royal Enfield lineup. Featuring an overhead camshaft (an RE first, again), a carburettor with a throttle-position sensor and a fairly niggle-free 5-speed gearbox, the Himalayan’s motor is contemporary, but in no way path-breaking. Tuned more for mid-range tractability, the motor produces a 24.1 bhp at 6500 rpm — an underwhelming figure on paper, as I’m sure you would agree. It does, however, offer 3.2 kgm of torque from 4000 to 4500 rpm, which is a more positive indicator of its real-world performance. The last of the spanner in the works is the 182-kg kerb weight which, technically, should be a huge bummer since there’s little you can hack off the bike in order to shed weight. Is it really a bummer, though?

No, not quite. While nearly all of the Himalayan’s specifications are conservative, very little of this translates to its actual performance. Fire up the motor and you get a sort of fast-paced single-cylinder thrum that’s not reminiscent of any other Royal Enfield powerplant. RE purists might find this engine note offensive, but it’s not like the UCE is garnering cult status either. A quick fix to this is the optional louder exhaust (yes, its sole function is to provide a more involving aural backdrop and not much more) which will be available as one of the many add-ons with the Himalayan. In motion, the Himalayan’s performance is mainstream — no compromises shielded by the RE umbrella and no associated limitations either.

First gear is tall, second can push it to about 55-60 kph and from third gear onwards, the Himalayan’s power delivery eases out, comfortably topping out at a shade under 130 kph as indicated on the analogue speedometer. This, as some of you will correctly point out, is not what is expected of a long-legged go-anywhere motorcycle, especially since it translates to a comfortable cruising speed of 90 kph at best. This is the sole debatable aspect of the Himalayan, something that will divide enthusiasts into camps, just like it did to us motoring scribes. Keeping in mind the confidence the Harris Performance-tuned chassis imparts with on the road (due credit to the surprisingly good Ceat on/off-road tyres as well!), you can tell that the Himalayan can easily handle a 50 per cent power bump, if not more. However, that would also bring about noticeable stress levels and a substantial drop in fuel efficiency, apart from taking away from the friendly responses most crucial to its character. I, for one, am willing to live with this deficit since what it offers leaving aside its restrictive highway performance is just spectacular. Simply enter the Himalayan’s home turf — dirt, or to be more specific, anywhere with no sign of tarmac, to understand what I’m saying.

This bike is simply phenomenal over the rough stuff. Within the first minute of taking it off tarmac, you can forget everything you read in the specification sheet and just focus on riding it like a lunatic. I’m not talking about a short burst of off-roading, mind you. How does 250 km of intense trail riding over broken tarmac, dirt, gravel, slush, rocks and a river sound to you? Not enough? How about you add rain and snow to the mix, then? It is, without a doubt, very evident that the Himalayan is not an extreme machine. It’s not a motocross-grade motorcycle nor an amalgamation of the richest resource pool of components, no. However, there is one elementary  function a good off-road-worthy motorcycle is supposed to do — placing both wheels exactly where you want them with no stress and very little input. That, in a brilliant feat for Royal Enfield, the Himalayan does with perfection.

Under relentless periods of being subjected to extreme duress, not a single squeak or rattle emerged from anywhere on the Himalayan. Not only is it robust, but it also isolates the rider from the stress and fatigue you would associate with riding over unforgiving terrain for a couple of hundred kilometers. Going downhill over a deceptive layer of the gooey stuff, you can slam down on the gears, let the tail kick out and get back on the throttle as early as you like — the Himalayan will not put a wheel out of place and probably throw in a slide or two on the exit for your entertainment as well. It is off the road that you appreciate the progression of the throttle and brakes, neither of which are razor sharp (something the tarmac-only riders amongst you might find slightly disappointing). What this friendly, approachable mannerism does is make you a part of the Himalayan’s momentum, rather than a lump of jelly hanging on for dear life.

So, why if the Himalayan is so thoughtfully set up does it not feature stuff like ABS and fuel-injection? Because it doesn’t really need it. Off the road, the Himalayan does everything it’s told and the execution is, more often than not, far more refined than the rider’s input. Thanks to the half-duplex split cradle frame and the 200/180 mm (front/rear) suspension travel, it absorbs, cushions and irons out everything in its stride and that’s worth a lot more than spec-sheet superiority. Fuel-injection would have added to its refinement but also, crucially, to its price tag — oh, and try finding someone up in Khardung La to help you fix a fuel-injection unit. On the flip side, however, RE has made the bold decision to not equip the Himalayan with a kick starter and I really hope the electric start unit doesn’t let me down, ever.

Wait, why did I say ‘me’? Well, I like motorcycles that can take me places other motorcycles can’t. But the Himalayan, I love. It’s not intimidating, not aggressive and not intensely involving, either. Instead, it’s like the motorcycle equivalent of your best friend — fun, trustworthy and, above all, a listener as good as it’s a teacher. The Himalayan is a motorcycle that will take you on a journey into the calm on the most subconscious level. It puts you, just like the music of Tibet, in a state of being rather than doing. It’s transcendental. It’s brilliant.