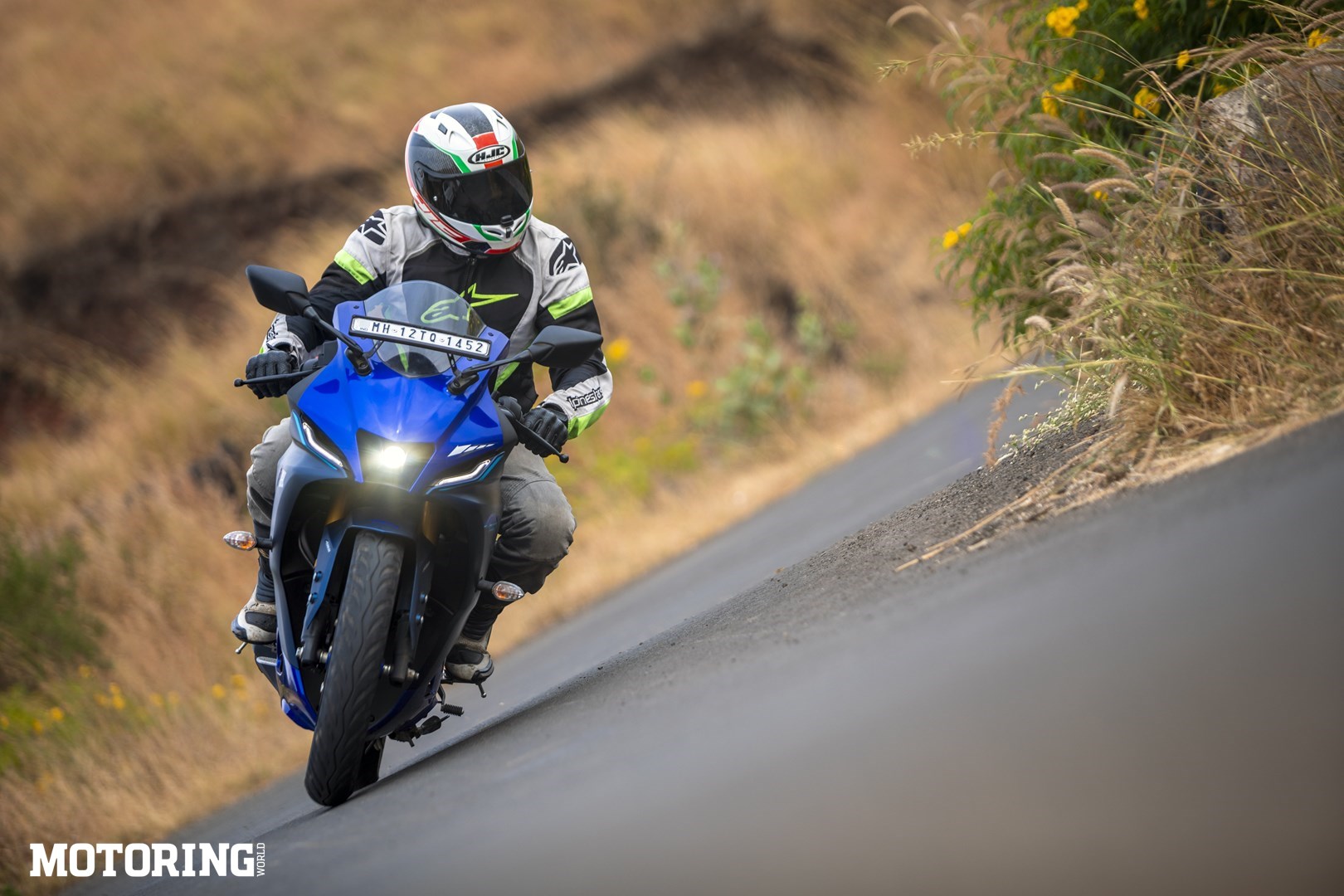 It was a day that took me down memory lane. This spanking new R15 V4 in Yamaha’s trademark Racing Blue is the latest iteration of this faired supersport motorcycle. For me, the R15 will always be special because it was my first motorcycle and I rode it for a good eight years. From the first generation to the fourth, there is a lot that has changed and also so little. The motorcycle’s appearance has matured drastically and it now looks like it has just returned from burning up a racetrack. But at the same time, the R15 has remained true to its original design and closely follows the same silhouette from when it was first introduced.

Whenever it came to appreciating the R15’s design, it would often be likened to the flagship YZF-R1, especially with the earlier models. That is a fantastic thing because it’s a clear sign of how popular the R15 is even today. And with the fourth generation that apes the YZF-R7, I can only see it growing further. While design is a subjective topic, I don’t think there is anyone who won’t like how the R15 V4 looks. Even someone who has never ridden a motorcycle in their life will appreciate how eye-catching the motorcycle is. 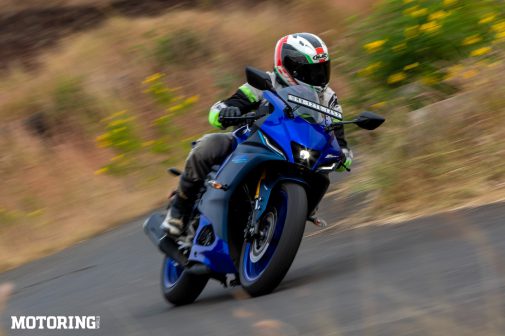 To be honest, I had my doubts about the single LED projector positioned in the faux air scoop at the front as I like the character of the split-headlamp layout. But when I saw the motorcycle in the flesh, it really wasn’t as bad as I thought. The LED projector flows rather well with the design, giving the R15 a more menacing look, and it’s also bright with a wide spread of light. The upswept LED position lamps on either side merge with the new floating side fairing, giving the motorcycle a clean and well-defined look. Speaking of which, Yamaha seems to have taken special care to maintain quality standards as the third generation scored poorly in this aspect. With V4, the fit and finish of the body panels are uniform, and the quality of the plastic materials and the switchgear is great.

Over the years, Yamaha has equipped the R15 with new features for buyers to brag about. This time around, the bike gets updated Bluetooth-enabled digital instrumentation, an upshift-only quickshifter, two riding modes, and traction control. I don’t quite understand the need for traction control for an 18-bhp motorcycle, but it’s probably a good safety net given our road conditions.

So, does the R15 V4 go as fast as it looks? The answer to that is a strong yes. Yamaha’s 155cc liquid-cooled four-valve motor is a gem and continues to undoubtedly be one of the best small-capacity engines in the market. There is a marginal drop in power output, but also a slight bump up in torque which is available 1000 rpm earlier, which should theoretically result in slightly better acceleration. In the real world, however, the difference is negligible. What continues to impress is the Variable Valve Actuation (VVA) which uses two different cam profiles on either side of 7400 rpm, offering strong low- and mid-range grunt, and high performance at the top end.

Also, the upshift-only quickshifter is slick and does add a good feel when you duck behind the fairing visor to chase top speed. The R15’s motor thoroughly lives up to the kind of character Yamaha is known for. Free-revving across the rev band, tractable, with the ability to accommodate different riding styles, and refinements that go a long way without causing any signs of fatigue.

However, what continues to prevail as the strongest attribute of the R15 is its handling. Right from the first generation to the V4 here, this motorcycle simply loves to corner. The forgiving nature of the motorcycle and its chassis constantly eggs you on to hit the apex of every corner that comes along. Falling into the supersport genre of motorcycles, the R15 doesn’t have the best riding triangles out there. The seat height stands at 815 mm, which is the same as V3, but is a little off for comfort. To go with it are the clip-ons that clamp the new USD fork under the top yoke. Thankfully, the height of the handlebars isn’t too low, but it is slightly more committed than on the V3. Meanwhile, the position of the footpegs remains unchanged. 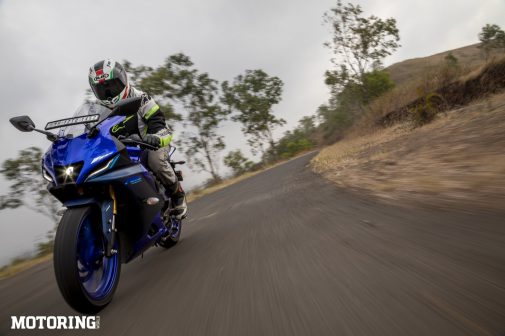 The R15 has finally received the USD fork setup offered overseas instead of the conventional telescopic one. Notably, the inner fork tubes on the USD suspension, at 37 mm, are smaller than the 41-mm tubes on the previous ones. While one of the drawbacks is addition of weight, the benefit of this setup is increased rigidity and stability under hard braking and cornering. Apart from that, the rear linked-type monoshock remains the same. No motorcycle is fun or safe to ride without good brakes, and on the R15 V4, I am happy to report that the brakes work flawlessly. Again, the setup is the same as before, and it offers adequate bite and progressive feel at the lever. 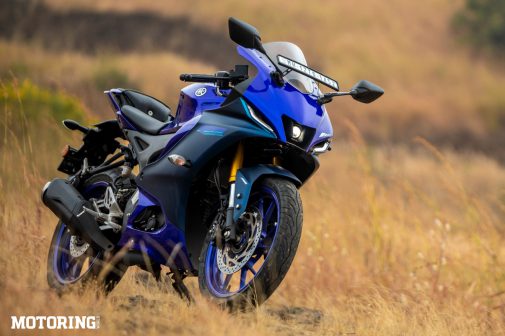 To sum up the new Yamaha YZF-R15 V4, there isn’t anything in particular that sticks out as a negative. If I had to, though, I would have liked the inclusion of adjustable levers and turn-by-turn navigation. Besides that, the R15 V4 looks fresh and up-to-date with Yamaha’s global design language and has premium cycle parts. Besides that, aspects like the high-revving motor and the dynamic handling continue to work in synergy, offering a fantastic combination of power and agility.

The price for the new updates adds about Rs 10,000 to Rs 15,000 over the outgoing V3, depending on the livery. For an on-road price that hovers around Rs 2 lakh, the R15 now costs nearly double of what it was first sold at. And yet, the R15 still comes through as the bike with the best-in-class riding experience that is difficult to match. The initial price of purchase might have gone up, but so have the capabilities of the motorcycle, which still make it the ideal machine to develop and perfect one’s riding skills. I think I need to pester the folks at Yamaha to provide an R15 long-termer soon. Hello, Yamaha?