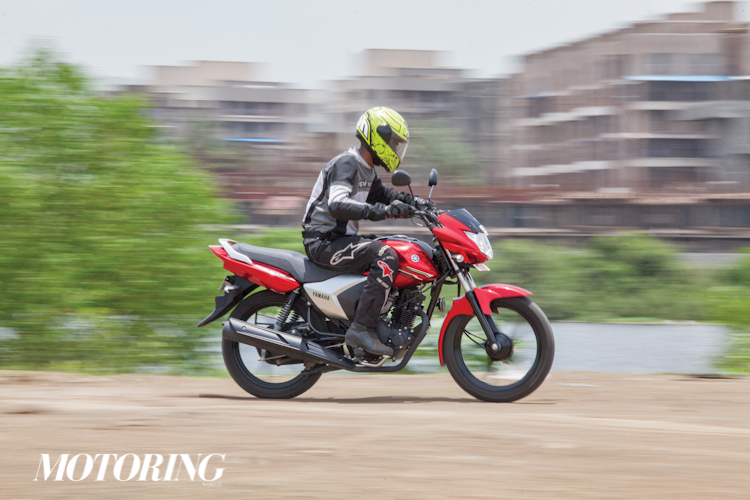 From the perspective of componentry, 125cc motorcycles seem fairly easy to put together. Just add a skinny set of tyres to a frail chassis, a motor that is largely a teetotaller and bodywork that will serve as little motivation to hapless copywriters who have the tedious job of making it sound ‘youthful and sporty’. In reality, however, it’s probably hardest to get a 125 right. Ask Hero, Honda, Bajaj, TVS and, of course, Yamaha that — they’ve been trying for decades and perfection is still elusive. The Saluto is Yamaha’s newest attempt at getting it just right. Has it succeeded, though? Let’s find out.

The Saluto is a sort of basic 125cc single-cylinder motorcycle with a name you’d have expected to see on a Mahindra (missed this one, you guys!). If you think it looks a bit similar to the SZ-R, you’re quite right, but that’s no bad thing, because like all other Yamahas, it’s quite big and spacious unlike many of its rivals. The 125cc motor produces  8.1 bhp and 1 kgm of torque and is mated to a 4-speed transmission. While those numbers aren’t as impressive as those of some others in this segment, it is in no way a slouch. More on that later, though. Yamaha would like to credit Blue Core for a lot of the Saluto’s virtues which, thankfully, are plenty in number.

The first thing you notice as you settle into riding position is the ergonomic setup. If you happen to be on the taller side of the Indian demographic, you will find the Saluto to be perhaps the comfiest, roomiest 125 around, more premium examples notwithstanding. It also looks rather good, if a bit conservative and the visually sporty stance does it a lot of favours. The seat is long and well-padded, and given how it merges with the slim fuel tank, aspiring motocross beginners amongst you might be interested in buying one as a thrasher.

What’s most to like about the Saluto, however, is the motor itself. It sounds soft and refined at idle, but if you feel like getting somewhere a bit quickly, the Saluto won’t disappoint. It accelerates without stress and is quick to clock  100 kph (don’t believe everything the over-optimistic speedo tells you, though). The gearing is well spaced out and the substantial low- to mid-range grunt is genuinely noticeable, especially since it doesn’t feel stressed nearly all the way to the top.

The brakes. For a chassis that is rather fun to push around whether on the road or off it, the brakes are, quite honestly, a disappointment. Drum brakes, however good, don’t belong on modern-day motorcycles and certainly not on a 125 with rather enjoyable performance. Under hard braking, I had to resort to using both, the front and rear brakes as opposed to only the front and despite my best efforts, coming to a halt was always a struggle. The 80/100 R18 Ceat rubber at either end is decent for moderate cornering although a disc brake at the front would have thrown light on the tyres’ performance a lot more. At the time of going to press, however, Yamaha announced the launch of the disc-brake-equipped variant of the Saluto — can’t wait to ride it!

Should You Buy It?

The Saluto is a rather likeable motorcycle, especially so because it’s quite fun to ride even at city speeds. It does the job it’s meant to — hurried commuting, primarily — with ease and at ` 54,000 (ex-showroom, Mumbai), it’s quite well-priced, too. While its rivals are more or less in the same price bracket, if what you want is a simple, comfortable commuter that perhaps stands out in a crowd a bit, the Saluto can be just the bike you’ve been waiting for.