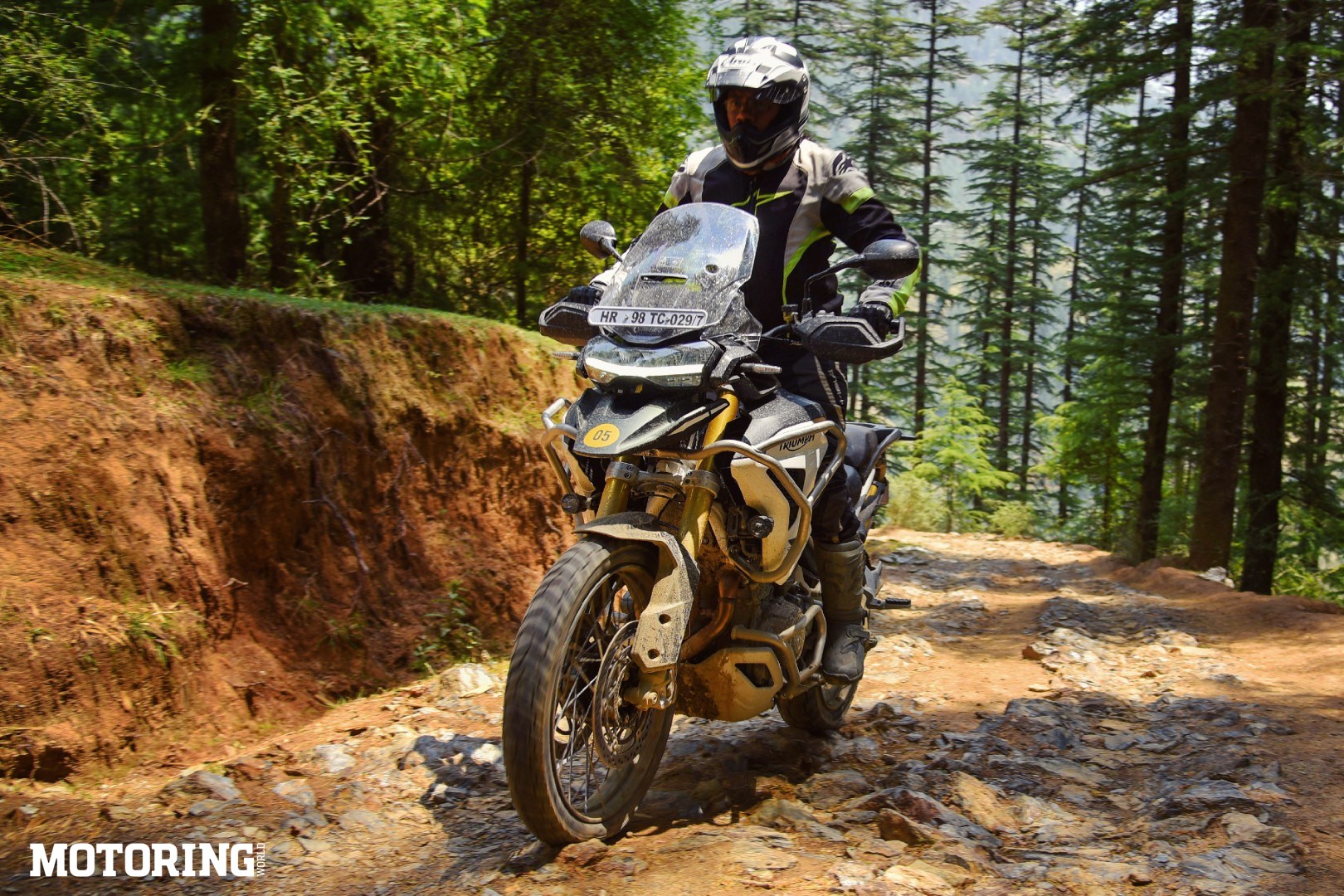 Built on the Seven Hills located on the southern-western range of the Himalayas, Shimla has been the preferred retreat to the mountains during summers for many years now, right from the time of British rule. It has scenic views in every direction and is one of the main contributors to making Himachal Pradesh the fruit bowl of India. But more than anything, the mountain state has some of the best roads, with loads of twisties and changes in elevation in a matter of a few kilometres. Thus when Triumph invited us for the first ride of the all-new Tiger 1200 to Shimla, it was the perfect opportunity to skip the summer heat and head for the mountains, and the ideal environment for the big daddy of Triumph’s Tiger portfolio. 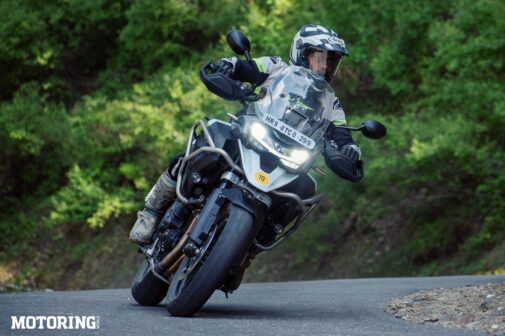 Out of the different classes of adventure touring motorcycles, the heavyweight ones are designed to rack up kilometres and plough through trails like tractors. It might be simple to put two completely different terrains in a sentence, but it’s quite the opposite to achieve it with one machine. And striking the correct balance becomes all the more of a challenging task, which can come at the cost of some limitations. To not let that happen, Triumph split the difference by coming up with GT and Rally variants for the Tiger 1200. 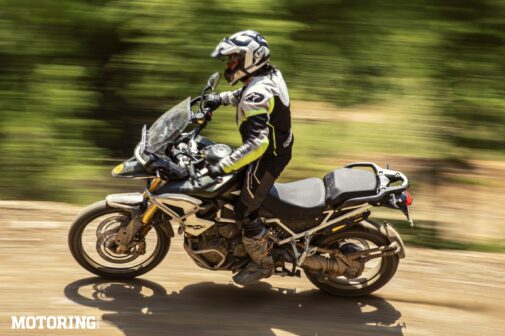 Both the Rally Pro and the GT Pro were present for the test ride, but before I get to how different the bikes are, let me first detail everything they share. Starting with the mill, the Tiger 1200 packs a repurposed powertrain, lifted from the Speed Triple 1200 RS. The 1160cc three-pot unit is tuned to pump out 148 bhp of max power and 13.25 kgm of peak torque. Besides that, the motorcycle is built around an all-new lightweight chassis, a cast aluminium Tri-link swingarm with shaft drive and an aluminium fuel tank, together contributing to making the cat shed about 25 kg in comparison to its predecessor. Triumph has also equipped the motorcycle with semi-active suspension, which lets the rider alter the damping and compressions to best suit the terrain and the luggage being hauled. In addition to the Pro variants, Triumph also has the Explorer variants of the Rally and GT models, which come with a larger fuel tank (30 litres) and a few additional features like heated seats, a tyre pressure monitoring system and a blind-spot radar as standard. 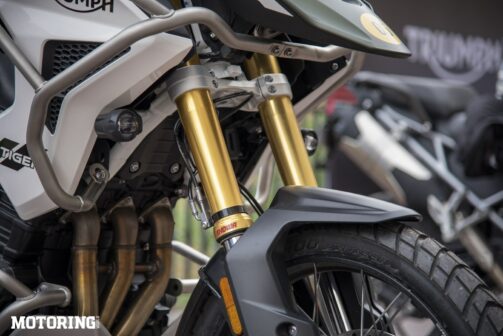 Previously, Triumph followed a firing order of 1-2-3 for the Tigers, which has now been changed to 1-3-2 along with a 270-degree crank, giving the motorcycle a personality of its own. The motor produces a steady torque curve, accompanied by a linear powerband that works out best for the kind of riding the Tiger 1200 is designed for. The configuration is not for producing big power figures but for flatter torque and linear power graphs. The change in firing order has also resulted in a change in how the bike sounds. Instead of the deep hum that was popular with the earlier Tigers, the motor now feels and sounds more like a parallel twin. To be honest, I prefer the older exhaust note, but if you were to leave that aside, the motor has a lot to offer when it comes to riding. 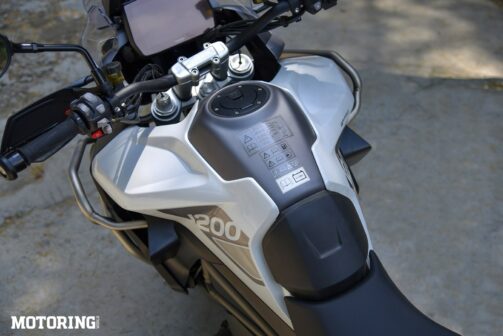 The first half of the day was spent with the Rally Pro. The Tiger 1200 comes with three standard riding modes — Road, Rain and Sport — while the Rally Pro comes with additional Off-Road and Off-Road Pro riding modes. Each mode alters the throttle response, damping setting, ABS and traction control, as per the preference of the rider. The Off-Road Pro switches off ABS and traction control completely, letting the rider take control of the motorcycle. The trail that was chalked out began with B-roads but soon graduated to more technical sections, with medium-sized rocks and rain-soaked ruts that added to the intensity of the course. It was pretty much a piece of cake for the Tiger 1200, as it managed to simply glide over the broken terrain. Once switched to Off-Road mode, the semi-active suspension gets on with the task of ironing out the undulations, leaving the rider disconnected from the bumps, but at the same time communicating all that is happening at the two wheels. 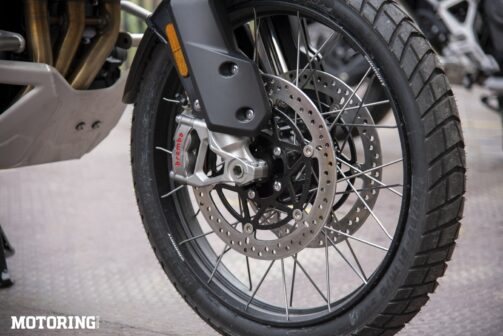 The 21-18 inch wheels setup with wired wheels is the universal standard for off-roading motorcycles, and it performs as expected on the Tiger 1200. While the front carves its way through ruts, gravel and mud, the rear creates a wide contact patch thanks to the 150-section tyre, propelling the bike ahead. Speaking of tyres, the Rally Pro comes shod with Metzeler Tourance tyres that dig into the unpaved road surface and offer lots of grip and traction. The latter bit of the trail consisted of steep uphill and downhill sections that required counter shifting one’s weight, especially around the tight U-turns. While most of us did manage to clear them, some found themselves in a bit of a tough spot while managing the bike’s weight — including myself. I’m 5 foot 7, and to ride a sub-250 kg motorcycle with a minimum seat height of 875 mm was quite a challenge. Yes, the seat is shaped in a way to allow maximum reach to the ground, but I could only manage to tiptoe for footing. 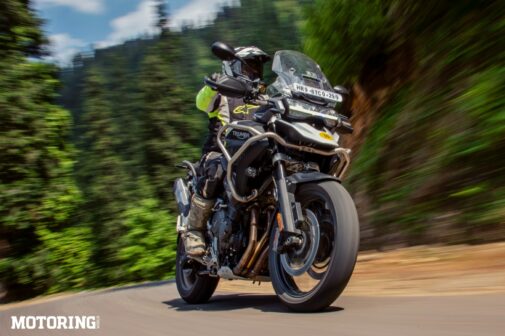 It takes some time to get accustomed to the bike’s weight and to work around it. The time when it was most daunting was during slow-speed manoeuvres or while taking U-turns on a trail. It requires a bit of technique and skill to keep the weight at the centre, as I had to put the bike down on three occasions due to the weight shift. But as the day progressed, and with more time spent in the saddle, I gained more confidence. 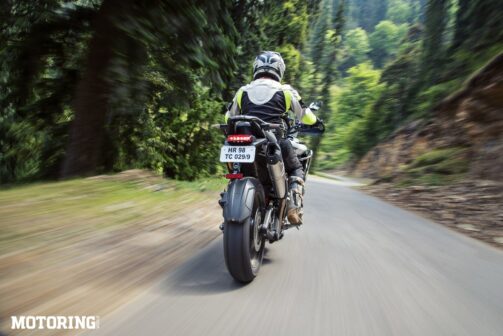 Done with the off-road course on the Rally Pro, it was time to switch over to the GT Pro. The route for the tarmac experience was full of twisties, and I rode the bike most of the time in the third gear while occasionally shifting up to fourth whenever an open stretch was available. I didn’t get to test how the bike behaves in the fifth and sixth cogs on highways, but what I can confirm is that even at speeds as slow as 25 kph, the motor has the torque to keep going while in third gear. The tractability of the powertrain is what made riding through the sequence of sharp bends enjoyable. Also, the two-way quickshifter on the Tiger 1200 is so good that I barely had to manually operate the clutch. 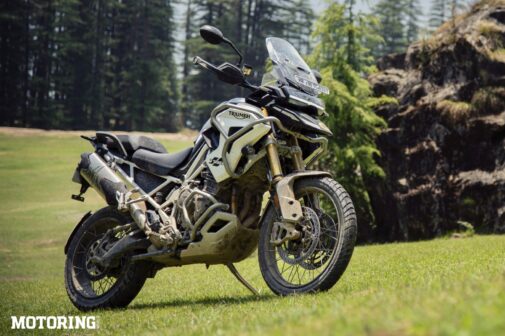 Apart from the ride mode selected, the damping can be tweaked on the fly. However, neither end of the nine settings made a significant difference in making the ride quality firm or soft. The GT Pro comes with 200 mm of suspension travel at both ends, 20 mm less than the Rally Pro. This indirectly brings the seat height down to 850 mm at the minimum setting, making it a lot easier to manage the bike. 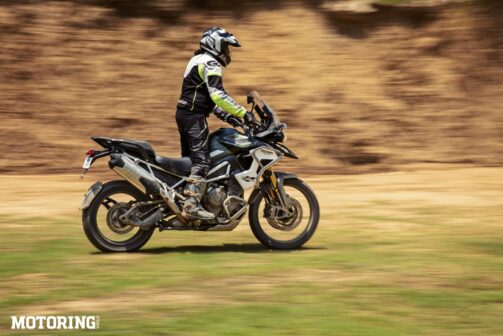 Once on tarmac, it is an immediate realisation as to how good the brakes are on the Tiger 1200. The bike is equipped with superbike-level Brembo Stylema callipers with a radial master cylinder for the front brakes, providing a precise feel and feedback at the lever. Whether it is modulating the brake pressure or the brake bite, there is ample bite to bring the bike to a halt in a jiffy. Also, like the combi-braking system on regular two-wheelers, the Tiger 1200 has a similar system, but here, on the application of the front brakes, a certain brake force gets applied at the rear as well. Not only does this help while off-roading, it also contributes to a safer experience, with a shortened stopping distance when riding on tarmac. 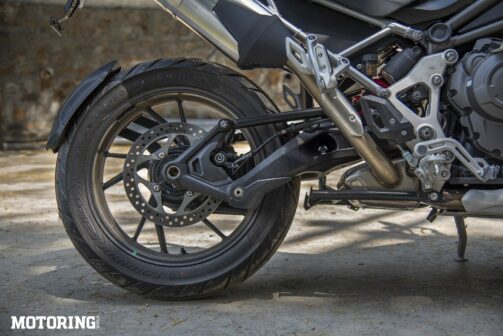 The Tiger 1200’s riding ergonomics put the rider in a commanding position once astride. There is a lot of room to move around, as taller riders will find the bike to be spacious and accommodating. The single-piece handlebar is wide, the seat well-cushioned and spacious, while the footpegs are neutrally positioned for long hours in the saddle. 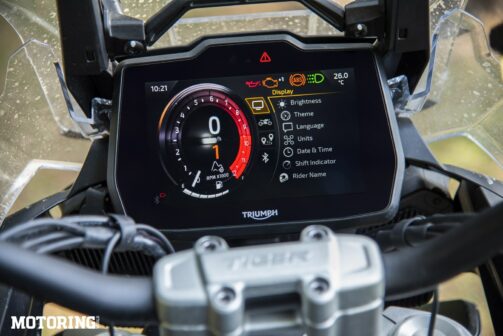 On the tech front, the Tiger 1200 sports a 7-inch colour TFT that packs all the information and access to the features. There’s a dedicated home button on the right to access the menu and a joystick on the left to toggle through the different settings. While the interface is easy to operate, it takes a lot of time for the screen to boot on startup — somewhere close to 10 seconds to arrive at the home screen from the time the ignition is turned on. 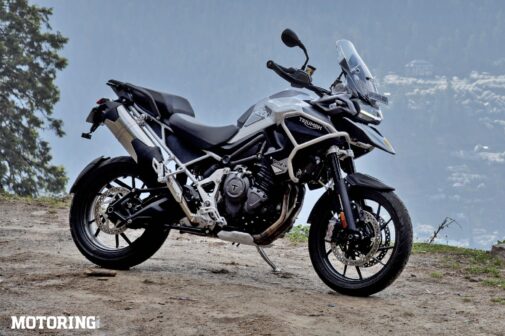 With the new Tiger 1200, Triumph has returned to the big cat adventure party. It is lighter, more capable, better equipped and packs a healthy dose of features that make it a very promising motorcycle amongst its competition. For the kind of motorcycle it is and what it is capable of doing, it racks up at the top in the tier one segment of adventure touring motorcycles. Yes, the overall proportions do take a while to get accustomed to, but for its price and the features on offer, the bike should allow the brand to draw in decent numbers on the sales front. This heavyweight from Triumph has the potential and equipment to sit at the top of the segment.