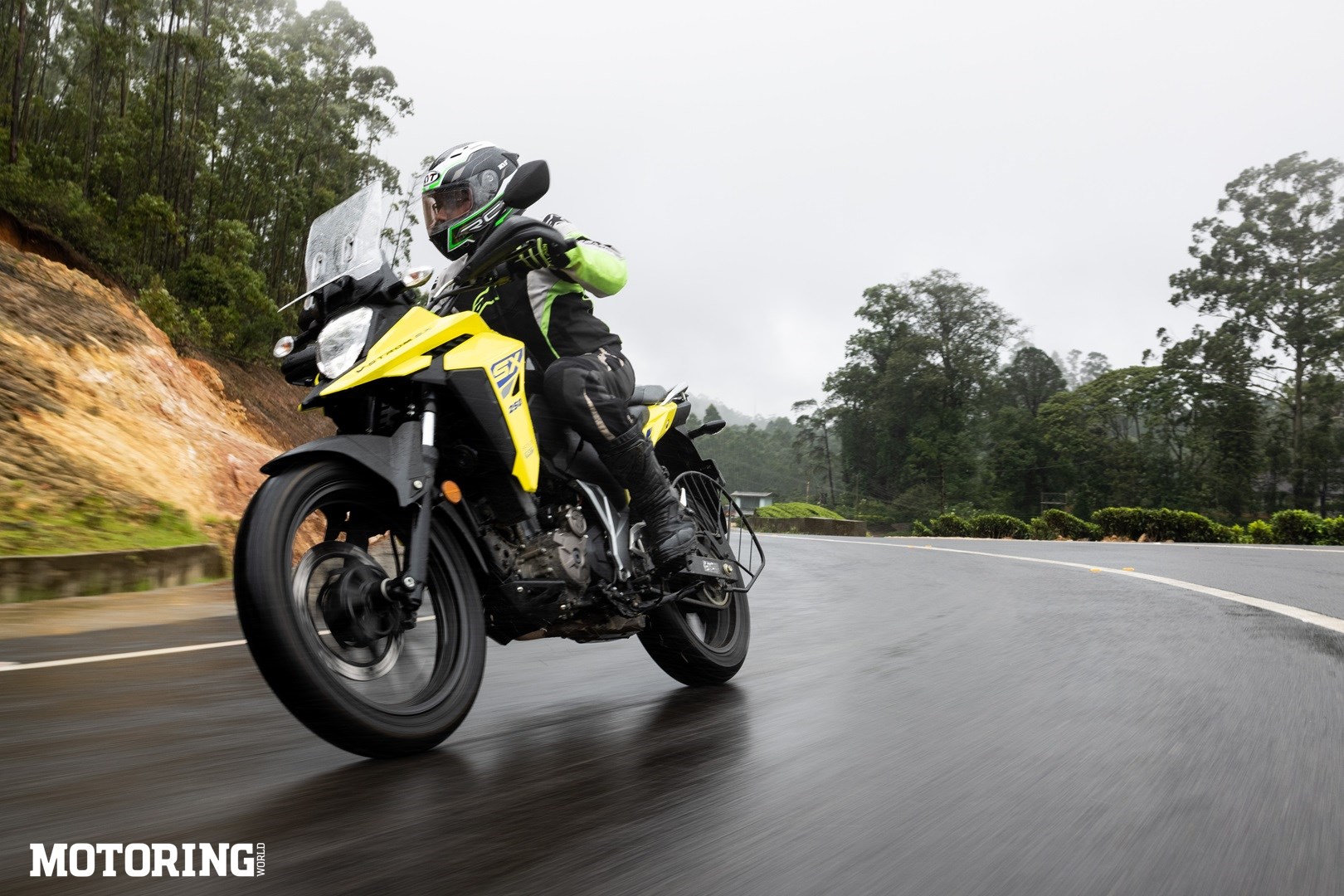 The brief was quite simple before we began riding. ‘The V-Strom SX is not an off-roader but a mild off-roader, principally designed to take on broken tarmac and B-roads.’ Hmm… isn’t that contrary to what the name V-Strom has been famous for? I’ll come to that later, but for now, Suzuki has joined the quarter-litre adventure bandwagon with the V-Storm SX. It is a ‘sport adventure tourer’ and is based on the Gixxer 250, a motorcycle that I like a lot, which is also the reason I was intrigued by it. 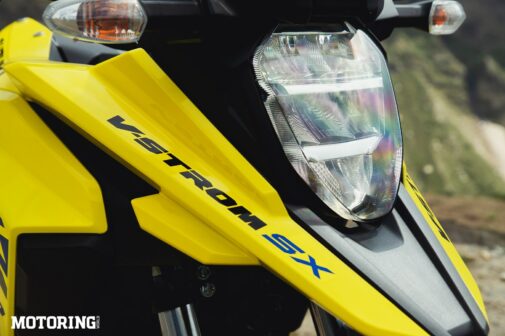 Suzuki had taken a different approach for the first ride of this motorcycle, as they flew journalists in pairs to strategic locations with scenic views, with ample riding time on terrain that was best suited for the V-Strom SX. I found myself in Madurai along with Joshua, a fellow journalist, to ride the bike till Kochi over two days, with a halt in Munnar. To be honest, such trips can have unexpected delays, and for various reasons, the ride started much later than it was supposed to and involved a fair bit of riding at night. 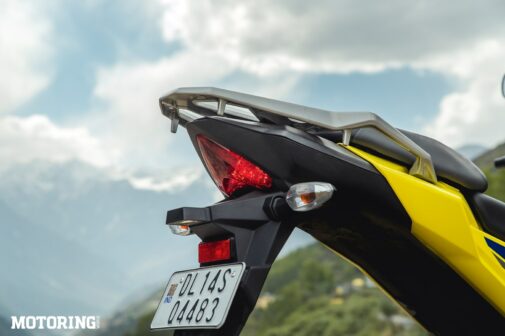 After making our way through the busy streets of Madurai, we got onto national highway 85, which would lead to Munnar in Kerala. With 170 kilometres to go and the sun setting quickly, the decision was to try and cover as much distance as possible before darkness took over. The V-Strom SX was up for the challenge, as it performed splendidly. The credit for that goes to the 249cc mill that’s lifted from the Gixxer 250. It is a gem of a motor, butter smooth and with a very rev-happy nature. The slick 6-speed gearbox delivered seamless shifts with unerring consistency, and it was so good that it was easy to perform clutchless shifts by simply blipping the throttle and upshifting. 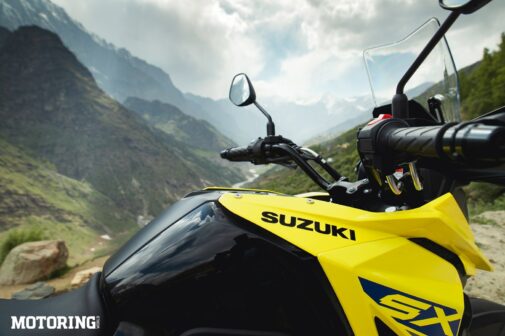 Before the first pitstop to fuel up the 12-litre tank, we had covered about 80 kilometres. Usually, at every stop, I make it a point to do some stretches to keep my body flexible and avoid getting any cramps while on the move. So far, it didn’t feel like I required it, which is always a good sign. Back on the road, under the cover of darkness, the LED lights on our V-Strom SXs are the same as the ones that Suzuki offers on the Gixxer 250, as are the indicators. The tail lamp, however, seems to have been lifted from the smaller Gixxer. 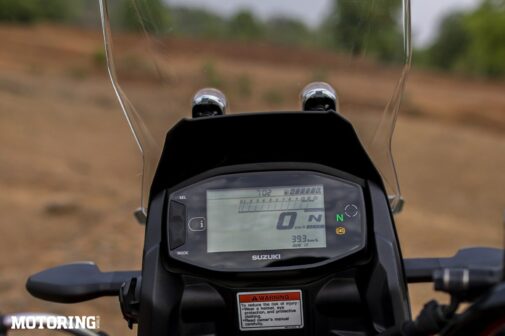 Until the first stop, the SX was very comfortable cruising at 80 kph-100 kph range without any hiccups. Also, there were no vibrations at the handlebar, pegs, or seat that felt intrusive. And that’s yet another good sign of a good bike for touring. Since it was now dark, our cruising speed was considerably less, but the SX continued to pull through in the sixth cog, with occasional downshifts to fifth for a quick overtake. The LED headlamp was bright but hadn’t been aligned correctly, due to which it was facing higher than it should’ve been. The resulting difficulty was the high beam pointing at the branches of the trees along the road rather than more of the road ahead. Joshua had the same issue too, and although it’s a small fix that requires minor adjustment, it’s still an important aspect that cannot be neglected. 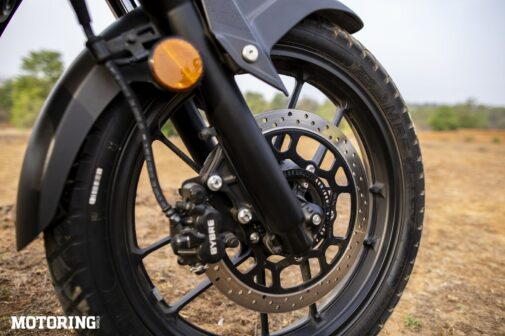 With that nitpick out of the way, we were now approaching the state border to enter Kerala, but before that, we had to clear a twisty ghat to get to the other side. The SX was up for this challenge as well. Using the existing chassis of the Gixxer, Suzuki has lengthened the wheelbase of the motorcycle with a different swingarm, a taller pivot swingarm pivot point, and an offset at the front axle to accommodate the larger 19-inch wheel. All of this adds 100 mm to the Gixxer 250’s wheelbase, taking it up to 1440 mm. This change in length has resulted in the SX being extremely planted around tight bends and sweeping corners, and it felt rewarding as we progressed. What also needs to be mentioned is how torquey the motor felt throughout the climb. For most of that time, the SX was able to scale up in third gear, with the occasional need to downshift to second for sharp and steep corners. 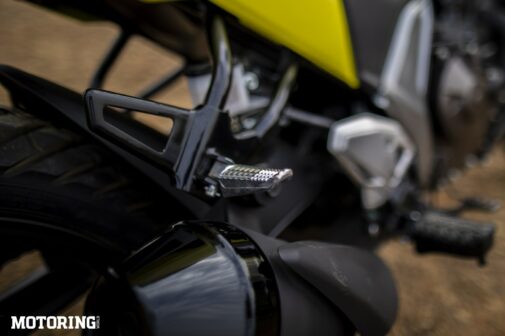 By the time we entered Munnar, the roads were already damp and the temperature had also dropped by several degrees. The last bit of the day’s riding involved rough roads, which the SX cleared without any complaints. The bike has 205 mm of ground clearance but only 120 mm of suspension travel at both ends, which meant the broken or under-construction road was the exact environment the SX was designed for. 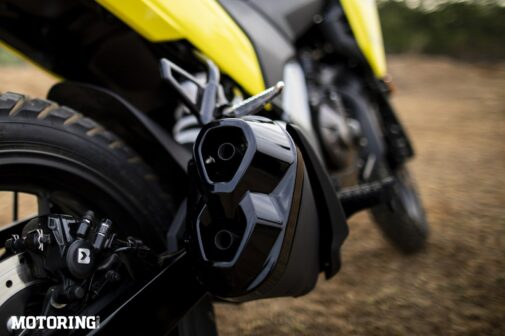 After resting for the night in Munnar, it was time to hit the road again. I have to mention here how good the ergonomics on the bike are. Even after a tiring day of riding, no part of my body was stiff or had developed a cramp. The bike employs a wide single-piece handlebar, slightly forward-set footpegs with rubber cushioning, and a taller seat height of 835 mm, 35 mm more than the Gixxer 250. But the additional 35 mm never came in the way at any time for my feet to reach the ground. Also, the seat is well-cushioned and has ample space to move around. All of these contribute to an excellent riding stance that’s neutral and comfortable, perfect for the kind of riding that we were doing. 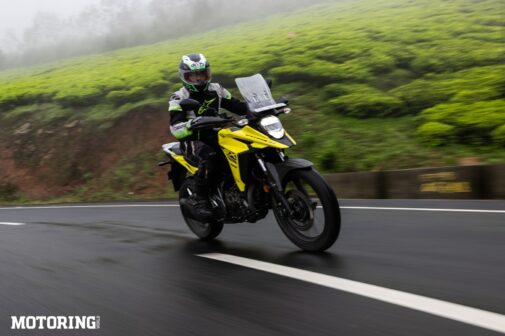 The weather forecast had suggested rainfall for the second day of the tour, and we got plenty of it. The good thing was that I got to test the grip levels of the MRF Mogrip Meteor tyres on wet surfaces, and I was impressed by how well the tyres were holding up around corners. The other thing that’s worth highlighting is the brakes. It’s the same setup from the Gixxer 250, and it continues to do a phenomenal job of shedding speed, with excellent bite and feedback at the levers for you to modulate the pressure as required. 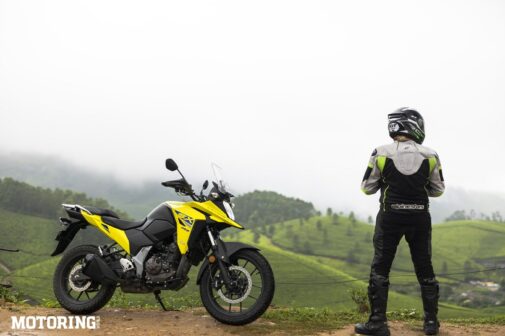 The second day of the ride has us cover a distance of around 130 kilometres before reaching a rain-soaked Kochi. Regardless of all the obstacles we faced, the V-Strom SX came through as a solid touring machine, proving itself over the various terrains that we rode it on. The total distance we covered was a little shy of 350 kilometres, which I managed to do without any complaints, apart from the headlamp positioning; I’d say that the V-Strom SX lives up to the ‘sports tourer’ bit of what Suzuki calls it. As for the ‘adventure’ part, to be frank, it’s not quite there; besides the revised ergonomics and added ground clearance, the SX is more like a Gixxer 250 on stilts. Still, the V-Strom SX is a proper tarmac-biased adventure motorcycle, an excellent sport-touring bike for its segment, and one that I’d be happy to recommend.