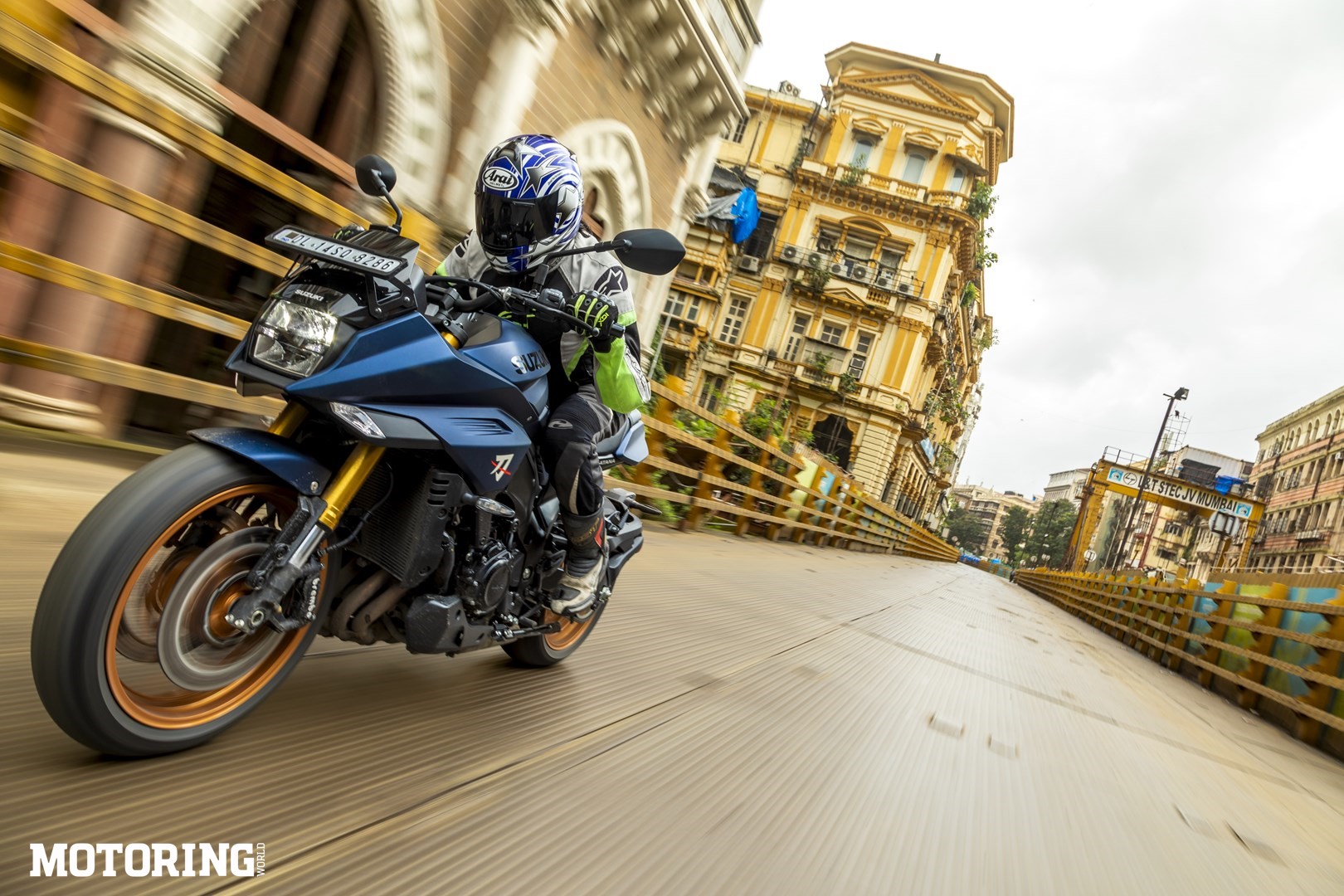 It’s half past four in the morning. That’s two hours before daybreak, and I’ve only slept for three hours, despite having tried my best to call it an early night. I just couldn’t sleep, even though I knew she was only going to arrive in the afternoon. She’s an icon from the past that has been resurrected, modernised, and updated with firepower, giving it a new edge. I can go on about how long I have stared at the pictures and posters of her. Absorbing every possible design element, maybe even creating a 3D image of her in my mind. I wish I could show you what I mean, but it seems that that won’t be necessary anymore. 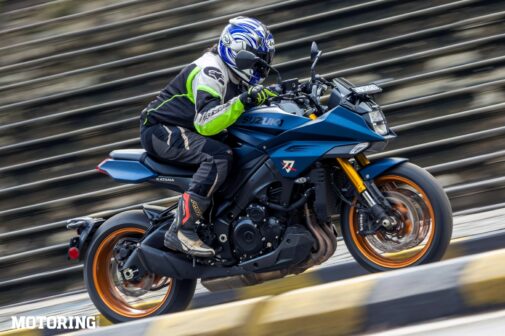 The Suzuki Katana is an icon that somehow stands out from other distinctive motorcycles that have existed. Its design was something that was never seen before, and even today, looks futuristic and space-age. The original motorcycle was based on the standard GSX-1000, but the Katana had such an influence on the motorcycling community that there was even an animated cartoon series, featuring the motorcycle as the ultimate machine of choice. Unlike other Japanese-origin superbikes that were designed and built in Japan, the Katana’s design took shape through a German motorcycle magazine Motorrad, wherein design houses were asked to represent how motorcycles would look in the forthcoming space-age future. Out of the three design houses that participated, Target Design won the competition, which caught Suzuki’s attention, and the rest as we know, is legacy.

The Katana is a distinctive motorcycle that strikes one of the sweetest balances between form and function. It was popularly used in racing back then and is so even today. Even in the bike modification culture, enthusiasts have resto-modded original Katanas into some seriously cool-looking bikes that would give modern bikes a run for their money. And in case you weren’t aware, even though it was for a short duration, the Katana held the title for the fastest production motorcycle in the world in the 1980s

The above is just a gist of the radical-looking Katana and its history. While it would be a dream come true to witness that unicorn in the flesh, Suzuki has made that dream somewhat a reality by bringing the modern-day Katana to India.

I had just a day to spend with this modern icon, which meant I had to make the best of the time that was available. Although I had hoped for the test bike to be in the iconic metallic silver shade, the one that arrived sported a matte metallic blue shade, which didn’t quite highlight the super sharp lines that well. Nevertheless, I was more than excited to get on the saddle and hopefully tire myself out riding it. But before that, I had to make a quick run to the fuel station to fill up its 12-litre fuel tank. Quite a limited fuel-holding capacity for a litre-class motorcycle, no?

Anyway, after answering some of the questions of curious onlookers, I reset the trip metre reading on the full-LED instrument cluster, slotted the bike into first gear, and on the very first open stretch of road, gave my right wrist a good twist. Within seconds, everything in my immediate surroundings had become a blur. I had already crossed the 100-kph mark, even before maxing out the first gear. The 999cc inline-four powering the Katana is the same motor that’s been lifted from the GSX-R1000 K5 series, which is known as one of the best modern litre-class superbikes to be created. So, you can only imagine what it feels to have that same mill on a naked retro-looking motorcycle that felt like it was shooting off like a missile.

The next stop was at our friend Yogi’s garage, where Reventón and Ferruccio (if you have been reading our stories long enough, you’d know), were waiting to check out the modern Japanese sword of the motorcycle world. The new Katana is largely based on the existing GS, specifically the GSX-S1000. Guess history repeats itself. In fact, for the design of the modern bike, Suzuki has, again, reached out to an outside firm, headed by Italian designer Rodolfo Frascoli. The challenge was to not just have a revival of the Katana’s design, but a redefined, modern version of the design that will carry forward the bike’s design novelty. And I think it is safe to believe, that the modern Katana manages to do this very well.

Compared to the original one, the new-age one is compact and stubby. Surprisingly enough, despite the four-pot unit, the seat and tank are relatively narrow. Also, the rider sits mostly on the bike, rather than in it. And this feeling does get a little more pronounced with the low-positioned handlebar and rear-set pegs. Since the idea of a windscreen is nonexistent here, the only way to channel the wind around the rider’s body is to duck down, and wrap your shoulder in. 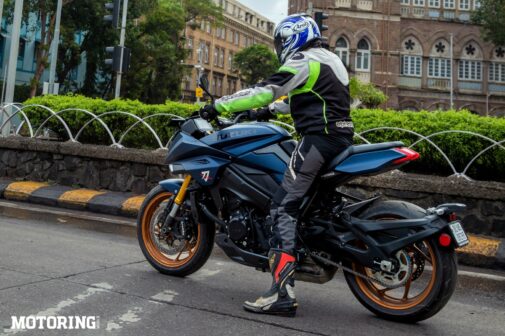 After all the banter, and some more reminiscing about the Katana, the ride back home was unavoidably a slow one. But again, I was in no hurry either. Instead, I took it as an opportunity to see how the bike felt like to ride in stop-and-go traffic. Being a litre-class bike, it is obvious that the motor was going to heat up eventually. But, in the case of the Katana, the heat was more manageable than what I had prepared for, which is really good. Also worth mentioning is the ride-by-wire system in coordination with the Low RPM Assist function that lifts the revs by a bit on releasing the clutch when starting from a standstill or in slow-moving traffic.

As destiny would call it, it started to rain at night. All plans and excitement to ride the Katana on the empty streets of Mumbai had been washed away by the rain. With precious time lost, my only hope was for clear skies the following morning. Fortunately, luck was in my favour as clear blue skies came with the following daybreak. Now, since I didn’t have the time to head out of the city to test the bike thoroughly, my impressions of the Katana are mostly based on riding it in-city. That said, while I didn’t have access to any fast, flowing corners, there are a few that provide a decent idea of a bike’s handling. From what I could experience, the Katana, like its forefathers, cornering comes very naturally. Leaning off the bike is so inherent that I wished to be teleported to a racetrack with my leathers, and put on a show. The compact nature of the bike and the smooth-revving character of the motor allow one to ride the bike through corners as if it’s on rails.

Coming to the suspension, the set-up (in neutral setting) is slightly stiff at the front, while the rear is comparatively soft. Although I only rode the bike on city streets, the ride quality felt quite plush. The fully adjustable 43mm KYB front and rear shocks (adjustable for preload and rebound) soak up the road imperfections pretty well. As for the brakes, I don’t think I have anything to complain about. The Brembos at the front and Nissin at the back shed speed with absolute precision. The bite is strong, and there’s ample feedback available at the lever that tells you what you are achieving, and what you can achieve.

Speaking of achievements, I still had the burning desire to ride the Katana at full clip, if nothing, at least for the first two gears. Luckily, I arrived at the marine drive stretch at the correct moment. I had an empty stretch of road before me and the next signal. So as not to be too aggressive on the throttle, I let the clutch slip in and followed it up with a good twist of the right wrist. Closer to the redline, I short-shifted to second and gassed it further before letting go and immediately reaching out for the brakes.

You can’t deny it, but there’s something about this 15-year-old motor that has made its way into the Katana from the notorious GSX-R1000. I have ridden the latter once, and it has a prominently frantic way of delivering power, pushing the motorcycle’s mass ahead rather than carrying it. The sense of speed is different in the Katana, and it is even delightful to the ears with the howl of the air induction and the four-into-one exhaust savagery.

I am sure that one speed run was enough to draw the attention of cops for the next three signals. But, since I had managed to achieve what I wanted, it was more of a cruise back home in stealth mode, like a ninja would, after completing his directive. By the time I reached, the 12-litre tank was back to reaching reserve, raising my eyebrows to think of the fuel stops one would have to endure due to the small tank size. But, it is a small cost to pay in order to stick to the Katana’s design philosophy. 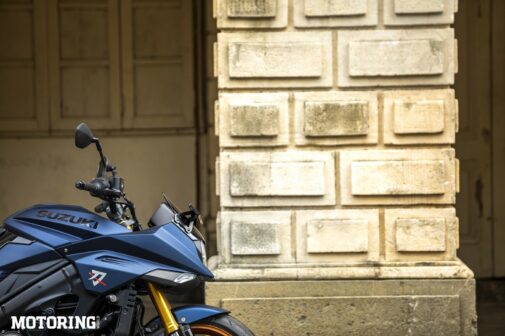 As the bike was prepped to be loaded on the flatbed, my hands were still itching to take it out for one last ride. The bike had arrived with only 36 kilometres on the odometer and was now going back a little shy of 150 km. And with that, my 24-hour date with the Katana had come to an end.

In hindsight, it is not an easy job when it comes to resurrecting a motorcycle that has multiple boxes to tick off. In the case of the Suzuki Katana, aesthetics are a crucial part, and so is the pride of ownership. In terms of kit, the motorcycle does have ride modes, with traction control and non-switchable ABS, but neither of the last two is lean-sensitive. And the motor is a 15-year-old machine, which isn’t necessarily a bad thing. 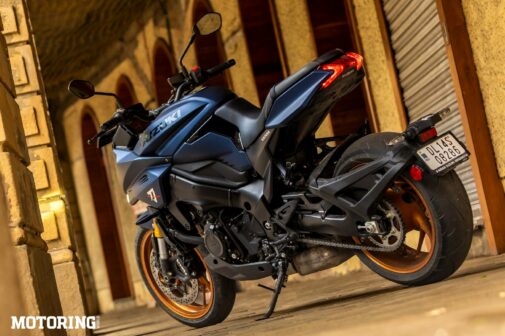 The original Katana was a turning point in the two-wheeler world. It used the engine and chassis of different motorcycles to offer something that turned out to be a very special and involving experience. And it is the same with the modern Katana, which follows the same strategy, and allows the rider to enjoy the best of both worlds. To conclude, the Suzuki Katana is a motorcycle that looks into the past, delivers a fun package on the performance front, and also completes the circle by carrying all of this into the future.