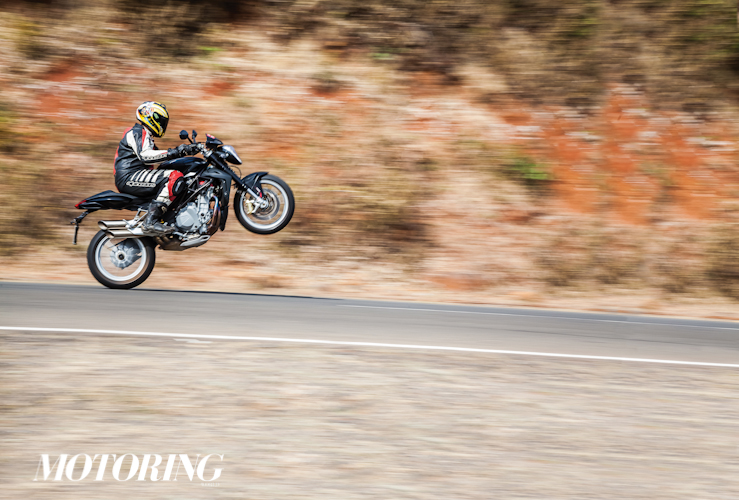 I suspected nothing. Having rolled out of the Kinetic HQ located in the armpit of Pune astride the MV Agusta Brutale 1090, I thought it was a good day to be alive. The sky was blue, my riding leathers felt perfectly cool and the motorcycle came across as sweet as your first 17-year-old girlfriend. I got pampered no end and there was no sign of dramatics, no matter what I tried. I’m talking about the bike, of course. This led me into believing that the next morning had in store for me a day of light-footed, decently-paced riding time, with every stop facilitating a visual indulgence. I wish I’d known better.

First, let me walk you around what is MV Agusta’s flagship naked streetfighter. To begin with, it doesn’t look like the flagship — the Brutale 800 does a better job of it. This one’s matte black with a pair of silver alloys, stuff we haven’t seen much of in this decade. It’s got all of the expected MV elements — exotic lines, immense attention to detail, a single-sided swingarm, a neatly-stacked 4-into-2 exhaust and, of course, an ‘MV’ insignia on every single component. Well, almost. But in overall appearance, it lacks the visual lustre that other bikes in its segment, or for that matter the smaller Brutale, bring to the table. It’s probably the matte black shade that should take most of the blame for this. Nevertheless, it still is quite the classic Italian beauty, isn’t it?

On the flip side, since the Brutale 1090 is a motorcycle (duh!), its form isn’t limited to mere aesthetics. Its minimalist, bordering-on-old-school design is meant to serve a purpose. That purpose is primarily to bring an extreme degree of romance to riding what is a crowded segment of high-performance motorcycles. For this aspect of its job, MV Agusta has bolted on within that tubular trellis frame a 1078cc inline-four-cylinder engine, the largest displacement engine in its entire portfolio. Being the largest doesn’t make it the most powerful, however, since it produces 142.1 bhp at the crank — not the best in its class and barely twenty more than the 800’s output at the wheel.

That’s where I got tricked. The specifications and approachable manner of the engine’s power delivery led me into believing that the 1090 is the bigger yet calmer iteration of the Brutale range. And I couldn’t have been more wrong. Out on the playground (read: a ribbon of twisties), the 1090 is a smattering performer, one that puts the fear of big bikes back into you in a sort of addictive manner. It’s not hostile in any way, but it makes you very aware of the consequences of being silly with the throttle. The rate of acceleration can be described as ‘frantic’ at best and the sheer brutality of the motor has to be experienced to be believed.

The 1090 isn’t equipped with an electronic quickshifter (unlike the 800) and so, you have to brace yourself for a higher impact of lethal acceleration with every shift up the ’box. With 11.4 kgm of torque at hand, the 1090 is also exceptionally tractable, since that’s about the only thing I am qualified to say on the topic of torque. What comes in really handy is the eight-level traction control which you must completely disengage only if you have at least nine MotoGP world championship titles to show on your CV. The Brutale has all the new-age rider assists you will ever need, but those just aren’t compensatory enough for aggressive, hard-input riding. That describes my riding style perfectly well, then, but there’s another aspect of the 1090 that covers up — the dynamics.

The Brutale 1090’s cycle parts are undoubtedly the best in the business, with Marzocchi and Sachs taking care of either end of the suspension bits. But it’s how the 1090 works as a whole, rather than through its individual components, that makes it the stupendous handling package it is. At 183 kg (dry) and with a 1438-mm wheelbase (1511-mm for the Ducati Monster 1200, for example), the 1090 makes a complete joke of its serious output figures — it’s just staggering how easy it is to flick from kerb to kerb. Dive on the brakes, slam the knee sliders down and prepare yourself to counter a wheelie on the exit. That’s how it is, every single time you commit to it.

This sort of behaviour is home turf on a small-displacement supermotard but on a litre-class work of superexotica, it’s frightening. I’d begun my day thinking I was prepared to handle it. My last stint on the Brutale 800 had, I believed, taught me what to be wary of. It had taken two pills to rid me off the devastating headache I was burdened with, after all. This time, however, I was caught napping. You can run out of a carton of knee sliders in a day’s work but the 1090 just won’t tire of it. The relentlessly sticky Pirelli rubber can be hugely credited for this as well, but more than any single element, it’s the way the dynamics have been engineered that really make the 1090 the darling that it is around corners. The faster the better, I must add.

The hooliganism doesn’t stop there. Get familiar with the throttle early enough and you’ll be treated to wheelies more volatile than a Middle Eastern extremist. On the spec sheet, there may be a handful of underwhelming dips, but in reality the 1090 is just outstanding in every aspect of its performance. It is, without a doubt, everything you’d want an exotic streetfighter to be and that, I’d like to believe, is exactly what MV Agusta set out to achieve with it. If such an intense level of saddle time is not what you’re looking for, it’s the sheer music from the 4-into-2 pipes that will satiate your lust for a big bike for a long, long time to come.

Now, the Brutale 1090 isn’t everyone’s superbike. It’s not your stereotypical mass-produced litre-class machine and so, it will probably be a bit expensive to live with. But if you are already waist-deep into the game and want to stand out from the crowd, you really cannot do much better than to get yourself the Brutale. If you can afford to shell out ` 19.3 lakh (ex-showroom, Mumbai) for it, I am extremely envious of you and I hope to never bump into you at a bar. With a motorcycle like this at your disposal, however, you’ll be able to make a clean getaway with no hope, ever, of anyone catching up.