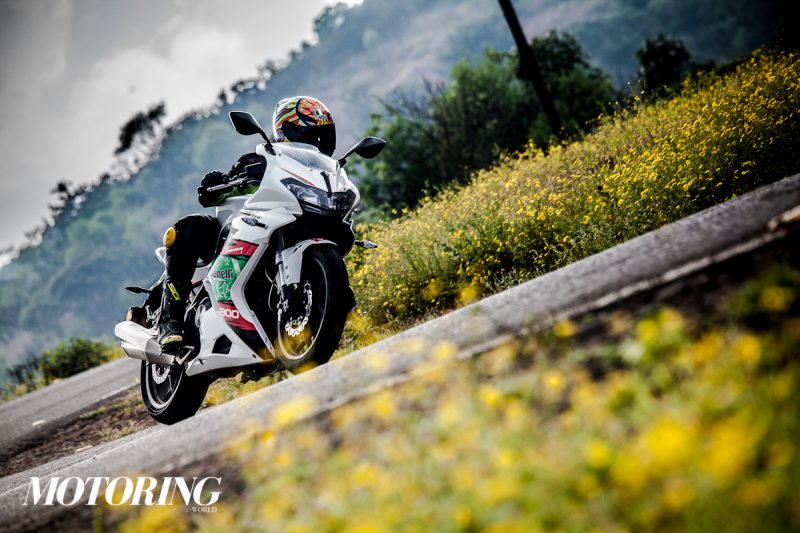 There’s nothing like being on a fast bike on a road that keeps up with it. And I’ve missed the feeling. Being off a bike for an extended period of time lays waste to any notions of being truly alive. And it doesn’t take long for it to set in, the desperation that you’d do anything just to be on a motorcycle in its natural environment. And it’s easy to get carried away in such a state of mind, especially when the bike you’re presented with carries the 300cc heart from one of your favourite bikes. That’s the biggest challenge I face with the Benelli 302 R, a motorcycle that’s on Indian riders’ horizons and approaching fast.

Now, ever since I saw this bike at the EICMA show in 2015 where it was called the Tornado 302, I’ve been looking forward to riding it because the idea of a sharper TNT 300 is a very tempting one. The 302 R’s naked sibling is an easygoing motorcycle with a soulful voice that could definitely benefit from a bit more focus. This Benelli, like many of its siblings, isn’t a natural-born Italian — it’s made in China and assembled in India — but it claims citizenship to the land of the Renaissance through its parentage anyway. Deservedly so, I say, because it looks like it has indeed gotten off a plane from Milan, not Beijing.

However, I think electing to disregard the ‘Tornado’ name for this bike is a missed opportunity; a proper agreeable name always lends more personality to a bike than a clinical alpha-numeric  designation. Another advantage of naming a motorcycle after a nasty weather phenomenon known for sweeping things (like cities) off their feet is sparing me from changing the bike’s name  everywhere in the story after its completion. Yup.

Anyway, if you’re wondering, as we are, why the 302 R looks so familiarly attractive, perhaps it’s because the bike presents itself as a sharper, modernised translation of sportsbikes of the ‘90s. And nowhere is this more evident than the bike’s wide and handsome face that gently crescents towards the rider. It doesn’t look at the road with savage aggression, but with a sporty concentration that promises a fun time. In fact, the Tornado’s entire proportions are defined by the latter; its lines are sharp and fast without being in-your-face.

And, as is usual fare on even relatively lower-end Benellis, few stones have been left unturned in the quest for attention to detail. Each nut, bolt, lever and bracket shows off a deliberate effort in design; the red trestle frame emerges from and disappears into the bodywork; the two-in-one slashed polygonal  exhaust adds a stylish and unmistakeable quirk; the petal discs and smart grey wheels add a cool sophistication worth their weight to the overall design as does the upside-down fork. But, given my fondness for the animal kingdom, my favourite design element is the emblemed lion on the plastic cladding under the tank who appears to be either marching or perpetrating a hold up.

Also, as on other Benellis I’ve ridden, it is plain to observe that Benelli has mastered the art of tightening everything that needs tightening because the bike feels one-piece solid. Needless to say, this is an aspect of utmost importance on a bike that promises to go way faster than your average Indian motorcycle. As far as niggles go, the only aesthetic aspect on this bike I can bring myself to grumble about is the meter console — it doesn’t look as fashionable as the rest of the bike, though it serves up all the necessary information you’ll need while blurring the scenery in a manner befitting a faired Indo-Sino-Italian bike. Indeed, that is exactly what I do when presented with the first stretch of open tarmac. And that’s when I notice something mildly disappointing.

My favourite thing about the TNT 300, its sound, is somehow missing in the 302 R. Even though there’s a pleasing enough intake roar, whatever changes have occurred in the air-intake and exhaust systems have taken a big chunk out of that motor’s aural abilities. The second thing I notice is the presence of surprising levels of vibrations at every point of contact, most uncharacteristic for a parallel twin, especially one that I know to be rich in smoothness in the TNT 300. Not that these things keep me distracted for too long, though; I notice them and almost instantly forget them because the Tornado is fast enough to leave minor niggles tumbling along the road in its wake.

Redline karaoke sessions on the 302 R reveal a newfound personality. Instead of the motor impersonating a velvety Michael Bublé, it performs a guttural James Hetfield. Certainly not what I was expecting, but perhaps it is to do some justice to the name it was meant to carry. I mean, a tornado can’t come across as entirely benign, can it? Part of this, I suspect, is that the 302 R is geared shorter than the more long-legged TNT. However, while the 302 R does seem a bit more lively, it is far from being a rabid motorcycle; it is urgent but not vicious, fast but not frantic. The motor is composed and linear irrespective of what your right hand and left foot are up to. It just seems to have more of an irreverent edge engineered into its erstwhile laidback character via small but key changes, that’s all.

Wikipedia tells me that common  tornadoes have wind speeds of under 180 kph, and it is inadvertently correct about this originally-named two-wheeled one, too. On one occasion, the 35-bhp motor choreographs the digital speedometer’s liquid crystals into a formation that reads ‘154’ with more shove left to arrive. I’d estimate the 302 R to go as fast as 165 kph, which is another way of saying ‘way too fast for everyday life unless you’re on a racetrack or on a deserted highway’.

The 302 R’s acceleration, though, is something you can live with and thoroughly enjoy every day. It clicks up through the gearbox without a fuss and romps forward with commendable enthusiasm, leaving traffic for dead at the lights. And when others do catch up at the next set of lights, they gaze at it with nothing but admiration. And, to keep the fun going, the 302 R handles way more predictably than any life-threatening wind activity you’re likely  to encounter.

This particular test bike came with a Metzeler front and a Michelin rear; I’m guessing one of either was irreparably damaged, necessitating a replacement with whatever was available. On this divergent union of rubber, the 302 R handles very well, even though I think it’d behave the same even if wearing both tyres from a single competent brand. The 302 R’s handling follows the same direction as its appearance and its motor — that of being sporty without being overwhelming.

The 302 R’s riding position is sporty, but not extreme in any way. In fact, it just might be the most upright among the low ’bars/rearset ’pegs crowd. This is good for everyday use, of course, but it doesn’t pose a roadblock on your favourite set of corners either. In a straight line, the 302 R is stable and inspires confidence, allowing me to concentrate on what’s ahead. And when the bends approach, it puts its best foot forward, too. It glides into corners, sure of itself, and never puts a wheel wrong. It follows my inputs precisely, and it isn’t long before I’m pushing it as far as I dare. And then the skeleton comes tumbling out of the 302 R’s handling closet — its footpegs.

In a fast downhill right-hander, the 302 R urges me to carry as much speed as possible and I willingly obey, only to have the footpeg dig into the road rather loudly, almost scaring me upright. That’s enough to make me spend the rest of the day giving my legs a good workout by hanging off the bike as much as possible in order to keep the ’pegs away from the tarmac. In the attempt to make the 302 R as comfortable as possible, its rearset footpegs are inevitably on the lower side of ground clearance in corners, hitting the deck well before the bike reaches its limits on either side. It’s a bit of a shame, really, because the 302 R can do so much more than it is currently allowed.

Also, this test bike had seen a rough 7000 km before I got it, which is why the brakes were a bit lazy, with a spongy feel and lack of bite. They worked every time I had to stop in a hurry, though, so I suppose they did their job of keeping me from becoming a part of the traffic/scenery. In any case, with the exception of its fondness for excavating tarmac with its footpegs, the 302 R did everything to make me like it. And I think a lot of riders will, too.

The 302 R is a motorcycle with a sporty personality that still favours ease of riding over outright speed. It doesn’t set out to be intensely athletic, but to provide everyday fashion fused with satisfying speed. Instead of gloved tight, white knuckles, it prefers a helmeted big, wide grin. Will it take riders’ hearts by storm? I think it will because it is an extremely likeable motorcycle. And even though it may not be what I expected, it’s as easy and fun as a whirlwind can be. I’m telling you, Benelli should’ve kept the name.